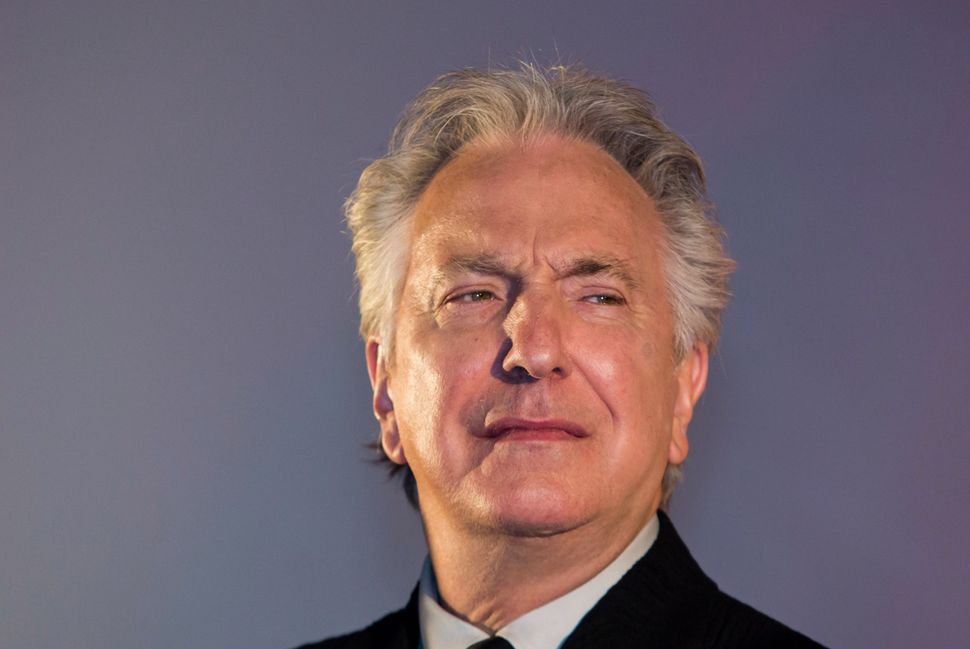 Let’s face it, there’s not much Jewish about Alan Rickman, the famed British who died of cancer on 14 January. He is well-known for playing our favorite villains, like Harry Potter’s Severus Snape and Die Hard’s Hans Gruber. But in reality, Rickman was mensch: married to the same woman for over 40 years, a close and loving friend and a generous philanthropist.

Here are 6 Jewish things you may not have known about the actor:

1) Alan Rickman may be the movie world’s favorite villain, but back in 2005, he became a real life villain for some in the Jewish world when he co-wrote and produced the play “My Name is Rachel Corrie” about the pro-Palestinian activist killed by an IDF forces bulldozer at an anti-occupation protest in 2003.

Rickman, on his part, did not feel the play should’ve caused such a controversy. In a 2007 interview he told Haaretz: “Many Jews supported it. The New York producer was Jewish and we held a discussion after every performance. Both Israelis and Palestinians participated in the discussions and there was no shouting in the theater. People simply listened to each other.”

2) One of Rickman’s last movie roles was Hilly Kristal, the Jewish founder of infamous punk-rock club “CBGB” in the movie of the same name:

3) Some of his best friends are Jewish, most notably and closely, Ruby Wax, the daughter of Holocaust survivor, an actress and notable mental health activist. She even helped him workshop the script for his Bafta winning performance in Robin Hood: Prince of Thieves behind the scriptwriters back.

4) Snape and Harry may have been enemies throughout “Harry Potter” series, but Alan Rickman and Daniel Radcliffe, the Jewish actor who played Harry, had a close and loving relationship, even years after the shooting of the franchise ended. He wrote that Rickman was “the loyalest and most supportive people I’ve ever met in the film industry […] if you call Alan, it doesn’t matter where in the world he is or how busy he is with what he’s doing, he’ll get back to you within a day.”

“…it might surprise some people to learn that contrary to some of the sterner(or downright scary) characters he played, Alan was extremely kind, generous, self-deprecating and funny,” Radcliffe wrote about the actor on his Google Plus page.

5) In Kevin Smith’s 1999 film, “Dogma”, Rickman played the role of Metatron (מטטרון), an archangel in Judaism, known as the Recording Angel or the Chancellor of Heaven, who appears briefly in the Talmud and in mystical kabbalistic texts.

6) But let’s face, Rickman’s most Jewish role of all is the angst filled, morose and Woody Allen-like robot Marvin in the movie adaptation of “The Hitchhiker’s Guide to the Galaxy.”