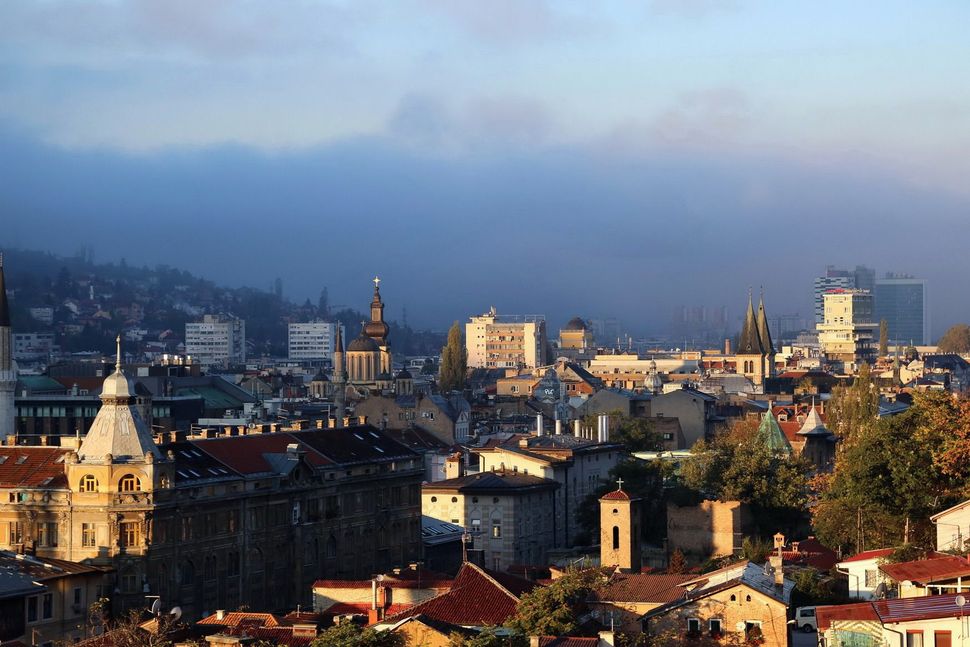 There are bullet holes on apartment blocks, civil buildings and places of worship. Even the tombstones in the Jewish cemetery are pockmarked. Located high on the hillside overlooking Sarajevo, the graveyard presented itself as the perfect frontline position during the city’s siege in the 1990s. Its graves bear silent witness to the Serbian snipers who hid behind them as they rained down fire on the city nestled in the valley below. On the day of my visit — despite the heavy cloud and drizzle — Sarajevo’s geographical vulnerability was obvious.

Last October the Jewish community marked 450 years in Bosnia with a series of anniversary events held in the capital; these were attended by a cross section of society. I had traveled there together with a delegation from the U.K. humanitarian charity World Jewish Relief, many of whose members had been involved with the Sarajevo community during the civil war and have since continued to play a part in its development.

Sarajevo’s association with war stretches back to events more than a century ago. It was here that Archduke Franz Ferdinand was assassinated in June 1914 — shots that triggered the World War I. Yet, despite its turbulent history and battle-scarred landscape, Sarajevo is renowned for its extraordinary cultural and religious diversity. In the center of the city there is a junction between two main streets where mosques, synagogues, churches and Orthodox and Catholic cathedrals all jostle for space. This convergence of religion and culture has caused Sarajevo to be called the “Jerusalem of the Balkans.” Since their arrival from Spain in the 16th century, it is one of the few places in Europe where Jews have lived in relative harmony with their Muslim, Orthodox Christian and Catholic neighbors.

Throughout the centuries, Bosnian Jews have had to manage the challenge of being a minority within a complex interethnic puzzle in a region affected by war, Tito’s brand of communism and then — in the 1990s — sectarian conflict. But the Jews of Sarajevo are aware that they now have to face a new challenge: regeneration.

“Twelve babies have been born since last May,” explained Elma Softic-Kaunitz, secretary general of the Jewish community in Bosnia-Herzegovina, “in comparison to no more than 10 in the last 20 years. There is no doubt that there will be a Jewish kindergarten in this city one day.”

This baby boom is largely due to the return of a younger generation that, as children, had been sent away during the 1992–96 civil war, many of them to Israel. Although this emerging generation is a source of pride and optimism, the biggest effort, Softic-Kaunitz says, is to keep these children within the community, to give them the opportunity to develop their Jewish traditions and to raise them as Jews,. But, she said, “this is not an easy task, as most babies are from mixed marriages.”

Over lunch in Sarajevo’s old town, Igor Kozemjakin, 36, says that he believes the kindergarten is “a reachable dream.” Passionate about Jewish learning, he wants his toddler daughter to receive a Jewish education.

Kozemjakin is regarded as one of the community’s young leaders, and he is committed to its growth and survival. He was raised in Sarajevo, and his parents and grandmother were active members of its Jewish community: His father was secretary general and is the community’s current president. When war broke out in 1992, Kozemjakin was just 10 years old. His grandmother took him and her three other grandchildren to Belgrade for safety. Kozemjakin’s parents, like many others, had expected the war to be over within a few weeks. Eventually the boy was sent to Split, Croatia, and then on to Israel, where he stayed until 2001.

Kozemjakin had been in the Israel Defense Forces for two years when his parents told him that they needed him back in Sarajevo. When he returned he immediately became involved in Jewish communal life, a decision that, he said, he does not regret. “There is a future here. We have to change minds — not to think about numbers but create quality, not quantity.”

Kozemjakin met his Ukrainian wife, Anna Petruchek, a teacher and artist, at Paideia, a Jewish education institute in Sweden. They are both ambitious for the community in Sarajevo. Its future, he thinks, depends on the availability of education. “Jewish education is essential, especially for children [in nursery school]. Informal education is not enough.”

He works for the Inter-religious Council in Bosnia-Herzegovina, a large interfaith organization, and, in the absence of a rabbi, helps lead synagogue services. The community recognizes that he has more religious knowledge than most, he says — he and Petruchek translated the siddur into Bosnian — and Kozemjakin is considering training to become a rabbi.

The Jewish community in Bosnia currently numbers 1,000 people, 700 of whom live in Sarajevo. There is an active Sunday school for 3–12 year olds, youth and student clubs, and a Jewish newspaper that produces four or five issues a year and is put together by volunteers, Softic-Kaunitz explained. Young people are represented on the board of the presidency, and there are different committees that address matters such as religious life and social care.

However, problems of a national, domestic nature impact the future of the Jewish community. According to Kozemjakin, the current economic situation is its greatest challenge. Political stagnation, a weak economy and high unemployment — some sources estimate it to be at 64% — mean that many young, educated people find it difficult to get jobs, and therefore consider leaving to seek opportunities abroad.

“Those who are ambitious will leave,” said Vladimir Andrle, 30, a professional musicologist who is working as a program manager for the Conference on Jewish Material Claims Against Germany (or Claims Conference), an organization that secures compensation and restitution for Holocaust survivors and their families. Many of his friends have already left, he says. He wants to go to Austria or Germany, believing that he can achieve a better quality of life there. He also thinks he would be better able to help his family financially. “I can’t fulfill my ambitions here,” he said simply.

A 2013 survey revealed that 81% of all young people would leave the country “tomorrow,” given the chance. The main reason for wanting to move was lack of employment prospects. According to the magazine Balkan Insight, in 2013 official statistics showed that one out of three unemployed people in Bosnia-Herzegovina was younger than 30.

Brothers M, 22, and D, 27, also share concerns regarding their future in Sarajevo. The elder is a qualified engineer, specializing in robotics. Although he is employed, opportunities in his field would be better abroad, in the private sector, he explains. He would leave Sarajevo, but his girlfriend, an only child, does not feel able to leave her parents behind.

“I would love to continue my studies in Japan,” M admitted with a boyish grin. A high-achieving economics student, he is exploring his possibilities. “Dream big,” he advised, laughing, “because you never know.”

Both brothers were recipients of a stipend from Connections, a project that was set up 20 years ago to assist students in their university studies, run by WJR. Without it, says Andrle, who has been the Connections program coordinator in Sarajevo since 2009, many young people would have been unable to afford to study. The stipend gives the students hope for a better future, improves the quality of their lives and enables them to focus on their studies without constantly worrying about their financial situation. But, in a small way, it is also helping community development. In order to be eligible for the grant, students must commit to involvement in the Jewish community. Many are youth leaders or teachers in clubs or residential camps.

From his office in the Jewish community center, Jakob Finci, president of the Jewish community in Bosnia and former Bosnia ambassador to Switzerland, tells me he believes that the community — in Sarajevo in particular — is characterized by a unique sense of harmony and co-existence. “We try to live together, to stay as Jews, but [at the same time we] are accepting of different religions, different opinions.”

Finci believes it is these values that have resulted in Bosnia-Herzegovina being free of anti-Semitism. There is little visible security outside the community center, which is unusual for a Jewish communal building. “Here, [in Sarajevo],” he said, “we feel very safe.” The building, which also houses a working synagogue, is open to anyone, Jews and non-Jews alike.

Finci denies that there is increased Islamophobia in Bosnia, unlike in the rest of Europe. The country has a majority Sunni Muslim population. Moderate Islam is mainstream and has been for the past 500 years, Kozemjakin pointed out: “Radical Islam is an intruder in Bosnian society.”

That is not to say that relations are always tension-free. Events in the Middle East can have an effect on Bosnia. During the last Gaza conflict there were pro-Palestinian demonstrations in the city, Finci says, but as a mark of respect, such demonstrations were never held near the community center.

The Holocaust had a profound effect on the community: before World War II there were a reported 14,000 Jews in Bosnia, 12,000 of them in Sarajevo. After the war, about 2,000 returned. With this devastating loss of life went Sephardic traditions such as the use of Ladino, or Judeo-Spanish. In the 1930s it had been the language of the community, spoken at home. Now, Softic-Kaunitz says, only five remaining elderly members speak it.

When war hit Sarajevo again, in 1992, many Jewish families left the city. Those that stayed during the city’s four-year siege used their neutral status to organize humanitarian relief through La Benevolencija — an old cultural and welfare organization that had been re-established in 1991. It operated out of the community center and provided food and medical supplies to the population, regardless of anyone’s religion or ethnicity. Under Finci’s leadership it also arranged the evacuation of more than 2,000 people in 11 mixed convoys of Serbs, Croats, Bosnian Muslims and Jews. Essential support and relief came from international Jewry, in particular from the Central British Fund for German Jewry, now called World Jewish Relief, and from the American Jewish Joint Distribution Committee.

Although the war in Bosnia ended nearly 20 years ago with the Dayton Accords, the country has remained divided along ethnic lines. A complex system of political and bureaucratic measures maintains the fragile peace. According to Finci, the elections held last year created little change, yet he hopes that the situation will improve; the strength and growth of the Jewish community is inevitably and intrinsically dependent on it. But despite the uncertainties and challenges, the survival of a Jewish community for 450 years in the Balkans is, Finci says, something remarkable. “Our intention is to stay another 450,” he said.

Anne Joseph is a freelance writer based in the United Kingdom.