Why We Should Applaud New York Philharmonic’s Next Director 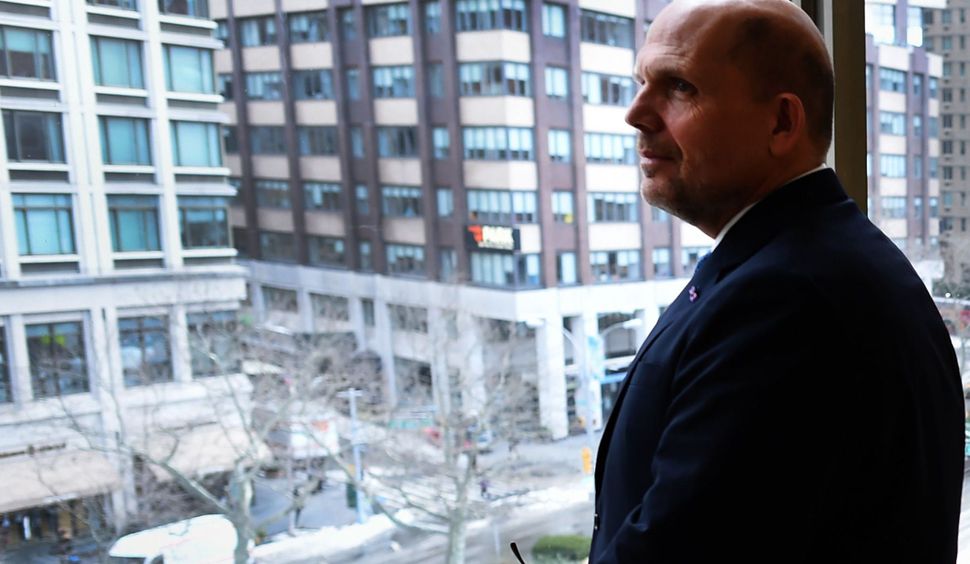 On January 27, after the New York Philharmonic named Jaap van Zweden as its next music director starting in 2018, an outcry from local journalists and international bloggers decried the decision. One blogger confidently proclaimed: “New York Philharmonic appoints the wrong music director.” These premature judgments based on insufficient evidence ignore the fact that in his demonstrated knowledge and appreciation of Jewish ritual and cultural history, van Zweden is a fine match for music-loving Manhattanites. He was a protégé of Leonard Bernstein, who decades ago urged van Zweden, once an orchestral violinist, to seriously embrace conducting. In return, van Zweden became a Bernstein devotee, prepping for a 2015 performance of Bernstein’s Symphony No. 3, “Kaddish” with the Dallas Symphony Orchestra by filming a meditative visit, wearing a kippa, to Amsterdam’s venerable Portuguese Synagogue. In another video, about a work by Shostakovich reflecting the sufferings of World War II, van Zweden explains how his grandmother fought in the anti-Nazi resistance and “killed a lot of Germans,” which he assured her was the “right thing to do” at the time, although decades after the fact, she had reservations about having taken so many human lives. Would that the Philharmonic resolved to rename the revamped Avery Fisher Hall in honor of van Zweden’s admirable grandmother instead of the unheroic media mogul David Geffen who merely forked over the loot for the renovation.

What Van Zweden’s learned from Lenny seems to extend beyond assimilated devotion to Jewish historical experience, and lore. With his bald dome and vigorous charging style on the podium, van Zweden recalls Bernstein’s mentor Dimitri Mitropoulos, a former Philharmonic music director, although unlike Mitropoulos, van Zweden conducts with a baton and has a certain restraint even in moments of great expansiveness, preventing him from overstepping certain limits. Having survived the Juilliard School as a violin student, van Zweden is well aware of the cutthroat Manhattan music world, and his talent has doubtless been tempered by this experience. As a former violinist of high accomplishment, van Zweden may be compared to Peter Oundjian, ex-first violin of the Tokyo String Quartet and a student of Itzhak Perlman.

Oundjian has carved out a conducting career in Toronto, sensibly far from the glaring media spotlight of New York. With intimate personal understanding of the soloist’s role in orchestral works and concertos, these former virtuosi can offer wise and experienced support to soloists and musicians in general. In a Mendelssohn Violin Concerto performance available online, van Zweden is if anything too deferential to a preening, self-absorbed French fiddler, Renaud Capuçon. With better soloists, as in much-acclaimed Dallas concerts with the pianist Emanuel Ax, van Zweden shines. Leaving his music directorship in Dallas with generally good memories is a distinct accomplishment. As noted a maestro as Georg Solti was nearly ridden out of town by local critics at an early stage of his career. Evidence is plentiful that as an orchestra builder, van Zweden has conferred upon the Dallas ensemble a refined, elegant, classical sound admirable for central repertory works. What better augur for his future work with the Philharmonic, which can sometimes sound rough or ornery when in a collective bad mood?

As a mid-career conductor of Beethoven, Brahms, Mahler, and Bruckner, the core classical repertory, van Zweden has proven himself to be a refreshingly dramatic, capable, and idiomatic interpreter. Passionate Bruckner and balanced Brahms from van Zweden will be welcome additions to the New York aural landscape. Experience as a virtuoso violinist — he was named concertmaster of the Concertgebouw Orchestra at age 18 — makes him at home in schmaltzier repertory, including Paganini and even trifles such as Zino Francescatti’s “To my Mother,” which van Zweden rendered as a violinist with chaste and sincere restraint. Such moderation is also a happy quality at the NY Phil, sometimes referred to as the Conductor’s Graveyard for its occasional mistreatment of baton wielders seen as lacking in knowledge and musicianship. For these demanding mavens, van Zweden will be a pleasure to work with. He actually knows orchestral scores, unlike some jet-setting stars who wait to learn music they must conduct until rehearsal times.

In admiring the Philharmonic’s choice, we must inevitably express relief at who they did not pick. Bloggers seriously disappointed about opportunities missed might reflect on the toxic baggage that some other conductors carry with them. The German Christian Thielemann’s association with far-right wing anti-immigrant groups in his homeland, or Gustavo Dudamel’s adulation of the anti-Semitic Venezuelan dictator Hugo Chavez remain troubling. Some of the gaggle of young Russian conductors pushed forward by outraged internet Cassandras as ideal candidates to lead the NY Phil may be compromised by closeness to the regime of Vladimir Putin, where anti-Semitism, homophobia, and state-organized assassinations have created a KGB thug aura. Is this really what is needed at the Philharmonic? Returning to the musical plane, young or even mid-career Russian conductors, while sometimes exciting in Russian repertoire, often prove unidiomatic or just peculiar in standard Western works. Dudamel provoked uncontrolled, over-loud playing when he led the Philharmonic. Yes, there were ovations from punters whose eardrums were ringing from the sheer decibel levels, but so what? At the Philharmonic, Thielemann’s concerts were far more satisfying, reminding us as always that these accomplished musicians can play well when they so desire. But could Thielemann credibly have wandered through an Amsterdam synagogue wearing a kippa, as van Zweden did? While van Zweden may not be a glamor boy or pinup image of the kind recording companies seem to prefer these days, his brand of Dutch intense sincerity may be especially appreciated in the hypocritical hornet’s nest of New York culture. He does appear to be someone who means what he says, unlike many of the slippery fork-tongued politicos among the conducting class. Since one of his four children is autistic, van Zweden takes a special interest in education issues. Being the conductor of a major orchestra is an educational task as much as anything else. Van Zweden should prove to be a patient, modest-sounding, sincere teacher, not a pompous deliverer of personal Sermons on the Mount in the style of Lorin Maazel or, also on occasion it must be added, Bernstein.

To find the ideal music director, someone at home in New York, including its Jewish historical and cultural aspects, who can also deliver bread-and-butter repertory with an orchestra once led by Gustav Mahler himself cannot have been easy. In the past, the powers that be at the Philharmonic have been justly criticized for favoring ancient, overpaid, reptilian star maestros who conducted banal, self-serving programs, making each successive season opener more tedious and predictable than the former one. The change to the relatively untried Alan Gilbert, while gradually developing in quality from a slow start, did not seem a good long-term fit. In the case of van Zweden, they have chosen sensibly and well, and deserve a round of applause.

Why We Should Applaud New York Philharmonic’s Next Director