The 100-Story Man Hits His Milestone 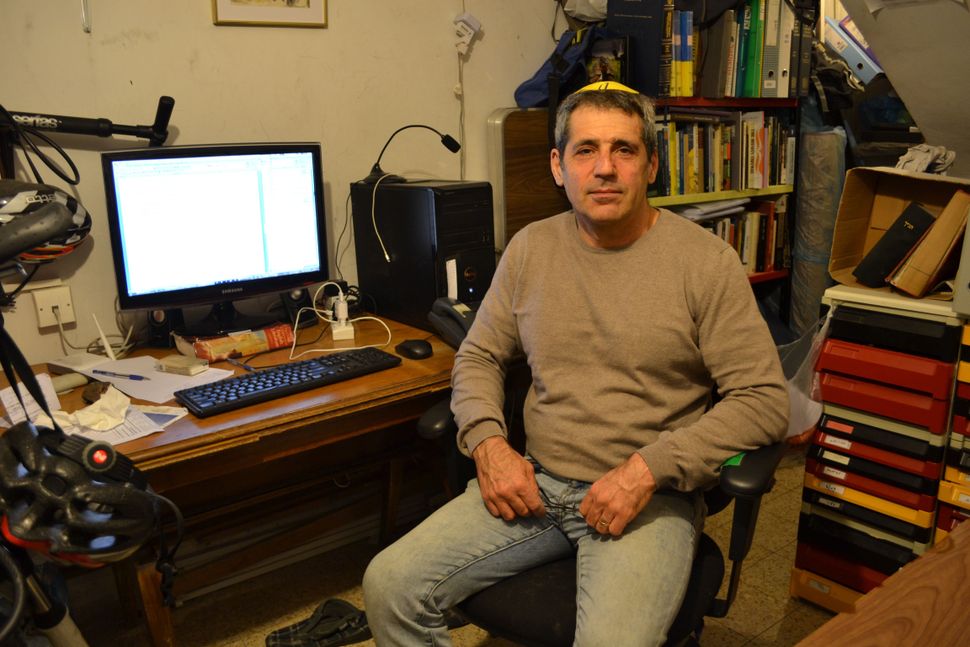 This February, Haim Watzman reaches an unplanned milestone: The Israeli-American writer will publish his 100th short story in The Jerusalem Report — in English.

When Watzman moved to Israel in the 1970s, he planned to write exclusively in Hebrew. It was part of the “Zionist ideology,” he said, and was an opportunity to show off his mastery of the language. But ideology is a stingy benefactor, and Watzman ended up making a career in the English language, first as a reporter and then as a translator and nonfiction author of two books: “Company C: An American’s Life as a Citizen-Soldier in Israel” and “A Crack in the Earth: A Journey Up Israel’s Rift Valley.”

His longest-running project is a short story column called Necessary Stories, which he has written since 2008 in the Jerusalem Report, a biweekly English magazine that is owned by The Jerusalem Post. His stories detail the lives of ordinary Israelis, often touching on current events. A man and his daughter chat with a waitress in a Jerusalem restaurant rendered empty by Palestinian stabbing attacks. A young couple eavesdrops on two teenage girls on a Jerusalem bus. The dialogue, though written in English, has the distinct feeling of Hebrew speech — that unmistakable combination of impatience and warmth.

Now, with his 100th story about to be printed, Watzman is bringing his work to the stage. In celebration of the event, six of the pieces will be performed in a dramatic reading at Jerusalem’s Kehilat Yedidya, the Modern Orthodox synagogue down the street from Watzman’s home, where he is a founding member.

Watzman’s interest in fiction grew out of the frustration common to many journalists who cover the Israeli-Palestinian conflict: the feeling that he was writing the same story over and over. He wanted to try something new. Yet it was the conflict that drew him to Israel in the first place.

He was born in Silver Spring, Maryland, to a Conservative Jewish family of strong Israel supporters. In college at Duke University, he was part of the campus Hillel and became an activist against the 1975 United Nations resolution that “Zionism is racism.” One day, while he was collecting signatures in the quad, another student challenged him. “He said, ‘Zionism is racism because it is only for the Jews,’” Watzman said. “I looked at him and thought, he is right. I never thought of it that way before.”

Watzman began researching the Israeli-Palestinian conflict and had a “crisis” when he realized “the stuff I had been told in Hebrew school wasn’t true.” He became an ardent anti-Zionist. Rather than fight his position, the Hillel rabbi suggested that Watzman go see Israel for himself. He signed up for a Jewish Agency trip, which complicated his perceptions. He volunteered in Kiryat Shmona and other under-developed towns, places “racked with poverty and delinquency and broken families.”

“By the end of that year I was a Zionist but a very critical Zionist,” he said. “I felt that if I went back to the states I would have to defend Israel because I was a Jew, but I couldn’t defend a lot of the stuff I was seeing so I thought I just better stay here.”

Watzman joined the army at the beginning of the First Lebanon War, feeling it was his obligation as a new citizen, even as he protested the operation when he was off duty. Then, when he was 40, he contracted a full-body infection. It took him a year to recover, and his toes were amputated in the process. Watzman continued to fulfill his reserve duty, hoping that the hospital paperwork wouldn’t reach the army to disqualify him. He learned that he had aged out of the army in 2002, when his unit was called to Bethlehem without him during the second intifada. Desperate to join, Watzman nearly volunteered, but his wife, an Israeli meteorologist, forbade it. He spelled out his feelings — his anguish at not being able to join his friends, and his opposition to Israel’s reoccupation of the West Bank — in an email to his friends and colleagues. One recipient, an agent, said it was fodder for a book. “And I said, ‘My midlife crisis is a book?’” Watzman said. Three years later, “Company C” was published.

Military life is a topic that Watzman has come back to again and again in his writing. His son, Niot Watzman, had recently enlisted in the elite Golani Brigade when he died in a scuba diving accident in Eilat. He was 20 years old. In the year that followed, Watzman wrote his first novel, as of yet unpublished, about a group of soldiers. The book wasn’t about Niot directly, but it carried the weight of his death. “It is full of those feelings of separation, of not being able to understand the world, and everything,” Watzman said.

Niot makes an appearance in Watzman’s column once a year as a memorial to his son. Out of the 100 monthly stories, he has published four on Niot. One of them will be performed at the dramatic reading.

More than a reason to celebrate, reaching 100 stories is a reason to keep going. “I look forward to the next ones,” Watzman said.

The 100-Story Man Hits His Milestone