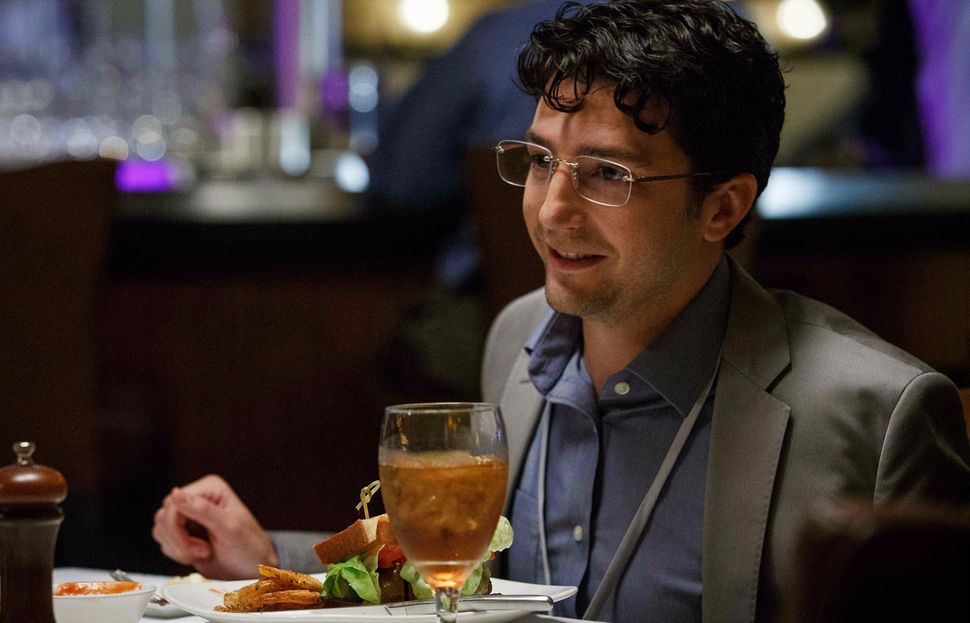 John Magaro doesn’t usually celebrate his birthday. Despite the fact that he landed one of the lead roles in “The Big Short” playing Charlie Geller, a nerd with glasses who starts a hedge fund out of his garage in Colorado, he shies away from attention.

On a recent Friday night though, still more than a week away from turning 33, Magaro convinced his crew to haul out from Astoria, Brooklyn and Hell’s Kitchen for burgers, fries and bottles of wine at Lucky Strike in SoHo, near the apartment he shares with his fiancée, Janice Hong. He had just finished filming “War Machine” in Paris with Brad Pitt. Luckily, he recovered from the food poisoning he contracted on the plane ride home, supposedly from some lettuce, to make it out.

At the 9:30 meeting time, the bistro was bustling, and Magaro’s entourage of 10, which consisted of his raucous cousins and childhood friends from Ohio, squished into the narrow space between the bathroom and kitchen to wait for a table. The busboys maneuvered around the group saying, “Excuse me,” while trying to balance platters of dirty dishes. No one seemed to notice they were in the presence of a man in an Oscar-nominated film.

Magaro wore an olive long-sleeved thermal T-shirt under a tweed coat, black jeans and matching black sneakers. At premieres, he’s outfitted in silky tuxedos, but in real life he seems clueless about fashion, even though Hong works at the designer brand Proenza Schouler. The first time Magaro and I met for lunch at Fiat Cafe, so much cat hair clung to his flannel shirt that it prompted me to ask if he had a pet. His cat’s name is Barnaby. He’s prone to greasing back his flowing jet-black hair and parting it on the left side. His Roman nose is rounded with a slight bump halfway down, and his soft cheeks give him a baby face. He speaks with a slight Midwestern accent, drawing out his vowels, and the blackness of his irises create a smoldering look, especially in photographs, heightened by his sometimes dark and cynical attitude.

Magaro gained recognition in 2015 for his role as Vince Muccio in the third season of “Orange Is the New Black.” Magaro claims he’s hardly ever recognized on the street, but one adolescent made a YouTube video reenacting her shock at seeing him in person (and couldn’t believe she didn’t say hello), and in a Reddit thread titled “John Magaro, the cutest thing to come out of OITNB Season 3,” CoriDori exclaimed, “YES! SO CUTE!”

He grew up in the 1980s in a suburb between Akron and Cleveland, Ohio, called Munroe Falls, which he describes as blue collar, “typical America.” Many of his neighbors worked for automobile companies. Both his parents were teachers. The town bored Magaro, but as a child he found ways to amuse himself, becoming known by his extended family as a prankster. During a family trip to Israel when Magaro was about five, he and his cousin, Jeremy Lublin, climbed a rocky fortress, looked down several flights to see an older woman in their tour group and started pouring water on her head. When she started to scream, they scampered away laughing.

Magaro’s pranks have only gotten more elaborate, and he typically enlists other family members. Another cousin recently had a birthday party in Newport, Rhode Island and Magaro convinced the cousin someone was chasing him on his way to the train station. Paranoid, the cousin directed his Uber driver to turn around and drop him off in Providence instead. He racked up a $100 bill that Magaro ended up paying in the form of drinks.

Magaro took an interest in acting at a young age, performing skits in his family’s living room and creating a humor radio show with Lublin at Camp Wise, their Jewish summer camp. Lublin and his brother Stephan both remember driving from their home in Toledo during elementary school to see Magaro perform in a production of “Peter Pan” at the Cleveland Playhouse.

When he was 13, his parents split and Magaro struggled to navigate the breakup. He felt embarrassed by it. He and his brother, Joe, who is four years his senior, butted heads as children, but they also consoled each other. Now they both live in New York and set aside at least one day a week, usually Sunday, to visit one another. Joe works in finance for Jay Goldman & Co. and is married with two children. Magaro met Hong at Joe’s wedding four years ago.

“He’s always bringing a new perspective on everything. He’s not one of those friends you putz around with and do dumb crap all the time,” said Kyle Martin, his best friend since sixth grade, who was drawn to Magaro’s pensive personality.

In high school, Magaro passed the time roaming around with friends, including Martin, occasionally sneaking drinks. Martin called the two of them “bubble kids” meaning they floated around to different groups and weren’t confined to one clique. Their public school was large, and Magaro liked to hide in the crowd.

Munroe Falls lacked the kind of substantial arts scene the actor wanted in order to launch his career. As he got older, he became more drawn to theater, particularly for its power as a means of escape or to critique society. He saw the Suzan-Lori Parks play “Topdog/Underdog” in college at Point Park University in Pittsburgh, and was “blown away” by the raw acting.

He moved to New York at the age of 22 and after securing an agent, landed a number of small gigs on television, including “Law & Order,” and in films such as “The Brave One,” “My Soul to Take” and “Down the Shore.”

But Magaro wasn’t getting the break he wanted, and for an entire year he couldn’t find work. He spent days cooped up in his apartment without venturing outside. He exhausted himself mentally trying to secure one audition after the next to no avail. New York became a depressing, dark place.

“It’s just easier to hide away and be inside when you feel like shit,” he said.

Eventually, he forced himself to take walks in the park, play catch with friends and breathe fresh air. He started going to the gym, just to give him something to do. He ended an unhealthy relationship and made amends to change his life. It’s a time that seems to still affect Magaro. When he talks about it, his speech slows and he retains a far-off look as if he’s reliving the pain. After a moment of quiet, he looks at me, aware of his honesty.

“I feel like you think I’m going to snap,” he says.

Magaro’s career took a turn after he booked the lead role in the 2012 film “Not Fade Away,” about a small town band in the 1960s trying to become the next Rolling Stones. In addition to getting parts in “Orange” and “The Big Short,” he also secured a supporting role in “Carol” alongside Rooney Mara and Cate Blanchett.

Martin has noticed that Magaro seems more comfortable on screen these days.

“Now he touches his face and it’s a little bit more believable,” Martin said. “His character in “The Big Short,” he was up there playing himself in a way.”

Magaro does have a habit of touching his face in conversation. When he’s thinking about how to answer a question, he’ll lean forward and twirl his facial hair with his thumb and index finger.

Magaro still retains a lot of anxiety, though — about making rent, about getting a job, about having to audition; he’s wrestled with panic attacks before readings. He seemed nervous at the prospect of having a writer follow him around, clearly not used to the idea.

After everyone sat down at a long table at Lucky Strike and wine was poured, a loud, bearded cousin bragged about his plans to woo a much younger co-worker by taking her to the ballet and announced that he needed to leave early to prep the next day by visiting a Turkish bathhouse. Everyone at the table laughed, but Magaro only smiled slightly, as if self-conscious around a reporter.

The crew then migrated to Toad Hall, the bar next door, for drinks after abandoning a plan to go to Gagopa for karaoke. About a half hour later, Magaro beckoned me to keep him company outside while he smoked a cigarette. I’d been talking to Hong, a small Korean-American woman with bleached blonde hair and normcore style, who defied her parents by switching from pre-med to fashion in college. She was telling me about the recent premiere for “The Big Short” and how Brad and Angelina had to leave early to escape the fans. She shook her head and said she didn’t want that life for her and Magaro. Now both 33, they mostly spend their time watching Netflix and ordering food via Seamless, like everyone else in New York. They’re getting married in the city December 10.

I followed Magaro outside.

“Everyone’s getting pretty drunk,” he said, exhaling, referring to the few who had stayed — his two cousins, Martin and Hong — while the others left to return to their families.

Magaro made a reference to reading “those stories” where writers document the debauchery of famous people and ultimately ruin their careers. The night seemed pretty tame compared to the memorable scene in “Almost Famous” with Russell Hammond tripping on acid and screaming, “I am a golden god!” from the rooftop of a raging house party, but I understood the concern.

Magaro doesn’t like to discuss potential roles, even with his family. Occasionally, his cousins can glean tidbits, such as where something might shoot or clues about the plot, when Magaro needs help reading lines, but nothing too revealing.

“He never boasts about doing something big,” said Stephan Lublin.

One of Magaro’s challenges is to stay focused and not become jaded. He lists a series of other concerns too, including worrying about judgment from viewers — if they dislike a character he plays, does that mean they dislike him as an actor? – and trying not to emulate the greats, like Meryl Streep, and figuring out his voice.

Magaro seems to look up to Pitt and heed his advice. During the editing process of “The Big Short,” Pitt [one of the film’s producers] asked Magaro if he wanted to see cuts, but Magaro refused because he was working at the time and didn’t want the footage to mess with his head.

“Oh, you’re still young. You’ll get over that,” he recalled Pitt saying.

Even though Magaro keeps landing roles in even larger movies — he plays a sailor in the recently released film “The Finest Hours” about a coast guard rescue mission during a “perfect storm” situation — and says he feels grateful, he’s nervous about not having another gig lined up. He seems scared he might relive that year of desolation.

“That’s my biggest battle,” he said. “Not to become a depressive f—k.”