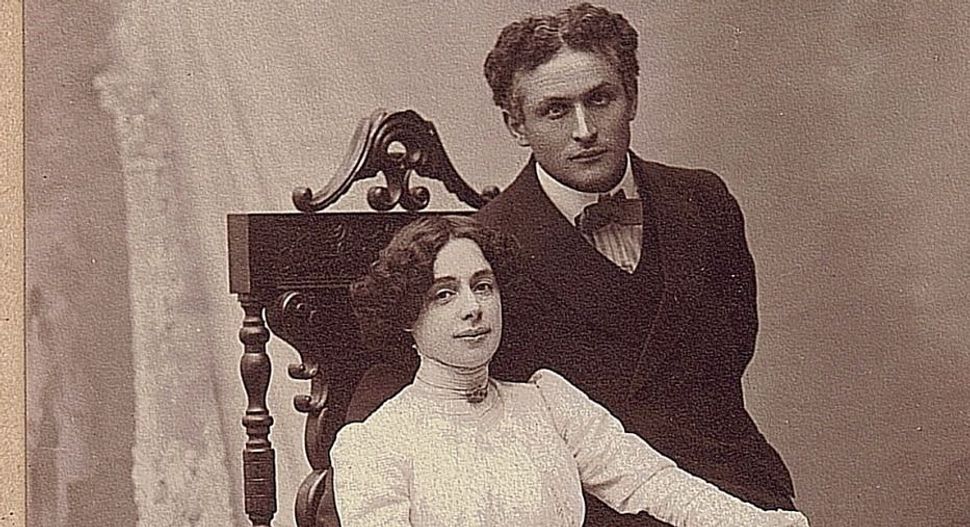 The epigraph of this novel, a fictionalized account of the love story between the escape artist Harry Houdini and his wife, Bess, is a quotation from W.B. Yeats: “The world is full of magic things, patiently waiting for our senses to grow sharper.”

The Irish poet’s words serve as a warning of sorts: This is not a book for the rationalists among us, given to seeing magic merely as a trick of the mind, a sleight of hand or — as in Houdini’s case — the product of superb physical conditioning and long practice. “Mrs. Houdini” is instead a brief for the mysterious and the unknown, as well as the transcendent, death-defying power of romantic love.

Victoria Kelly’s narrative skillfully bounces around in time, its form replicating the novel’s hypothesis about simultaneous dimensions of existence. The prose is involving but workmanlike, devoid of any high literary pretensions.

We begin in 1898, in Galena, Kansas, with Bess and Harry Houdini (born, in Hungary, as Ehrich Weiss, the son of a rabbi). The couple is performing an act that purports to summon up the spirits. Offstage, by way of excusing her deviation from their script, Bess later says, “It’s all a trick one way or another….” In this instance, she has managed — by dumb luck — to reconnect a woman in the audience with her long-missing brother, a foreshadowing of reunions to come.

Houdini reminds a shaken Bess that their magic “is something that happens when we’re together,” a testament to their deep connection. For her part, Bess realizes that, since their marriage, “her senses had been illuminated,” making colors brighten and lights flame in the dark. This imagery of darkness and light serves as yet more foreshadowing.

Kelly then flashes back to the couple’s first encounter, in June 1894, at Coney Island, the Brooklyn beach resort whose raucous carnival atmosphere she winningly evokes. This was a place, Kelly writes, “to forge extraordinary, resplendent lives under the lights.” The teenage Bess Rahner, a singer in a girl group known as the Floral Sisters, is in the audience of a magic show performed by Houdini and his brother, which included Harry’s escape from a locked trunk.

After the show, Harry Houdini woos Bess with an extravagant mix of charm, chutzpah and animal magnetism, proposing almost immediately. Theirs turns out to be a mixed marriage: Not only is she Catholic and he Jewish; she has faith in miracles, and he no more believes in the reality of magic than he does the claims of religion. Yet he does imagine the existence of another dimension – “a plane of living” where the dead and not-yet-born coexist – and is somehow convinced of Bess’s potential to reach it. Their marriage, to Bess’s regret, produces no children. But it is a happy, if not always easy, one. There is passion and also, on occasion, jealousy and misunderstanding. His mother, whom he adores, welcomes her as a daughter; her mother is harshly rejecting.

For a while, the Houdinis serve as stage partners. Then, as his stunts grow ever more elaborate, her role diminishes. Always looking to test his own limits, Houdini breaks out of a concrete jail cell in Scotland Yard, extricates himself from straitjackets and wet sheets that mummify him, submerges himself in ice water and below ground. He increasingly risks not just failure and embarrassment, but death.

When he does die, of a gangrenous appendix, at 52, he leaves Bess both emotionally bereft and financially insecure. She is consumed, too, by questions: Has Harry left her a secret stash of money, as he has promised? Will he be able to use their secret codes to signal her from the great beyond? Will she ever see him again, in this life or the next?

Just as Houdini sought to contact his dead mother through séances, Bess tries repeatedly to summon her husband. Her vulnerability, however, is just an invitation to frauds and con artists.

The true link to her husband will turn out to involve the art of photography. Houdini had found “something eerie and almost otherworldly about the idea of using light and darkness to capture a moment in time on paper,” Kelly writes. A series of photographic images that Bess discovers, redolent with coded meaning, lead her to a young photographer who will help unravel further mysteries.

Kelly parcels out her occult storyline in neat, controlled bursts. The skeptics among us will scoff. But it will be harder to resist the novel’s emotional payoff: its poignant portrait of a satisfying marriage, the rupture of grief and the seemingly magical ability of love to survive the grave.

Julia M. Klein, a cultural reporter in Philadelphia, is a contributing book critic for the Forward. Follow her on Twitter @JuliaMKlein.