A Refusenik Survives With Love and Pride 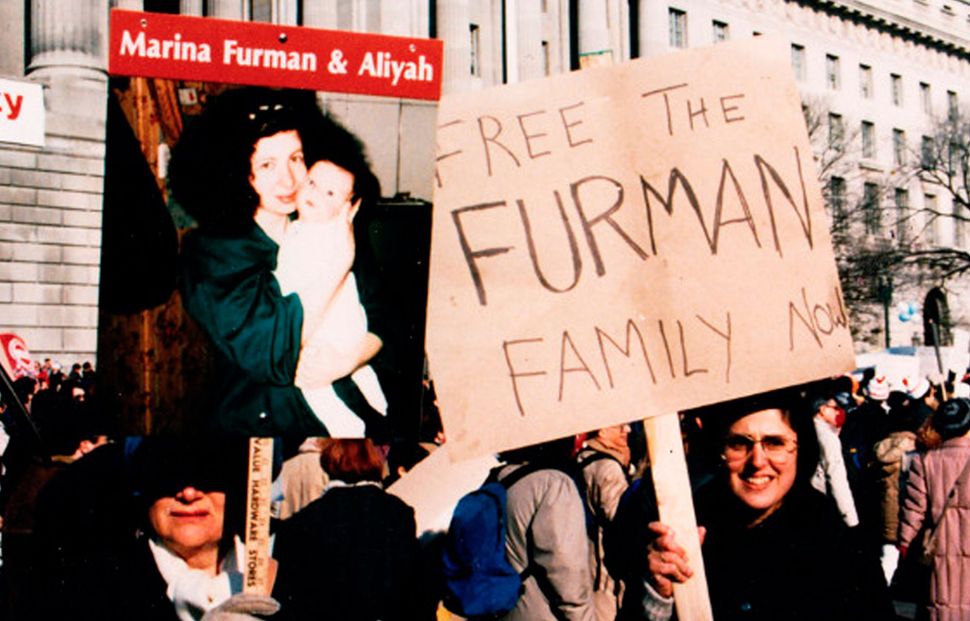 Image by Courtesy of Marina Furman

I knew that the wedding of my daughter Aliyah would be an emotional journey – it is for every parent. But I think mine was a bit more tearful, more unfathomable, more heart-wrenching. Mine was that of a mother who came too close to losing her child, mine was of a mother whose nine months of pregnancy were colored by darkness and dread, hope being a friend who often betrayed me.

In 1987, I was living in Leningrad (now St. Petersburg), Russia, and was desperately fighting against the Soviet regime for the right for Jews to emigrate. I lived from visit to visit of the smiling faces of guests calling themselves members of the Soviet Jewry Movement from the United States, Great Britain, France and Canada who were my only reprieve. It was miraculous to meet people for the first time and to know that by the time they left we were saying goodbye to lifelong friends. The visitors brought baby clothes, Hebrew textbooks and kosher food, they held my hand and assured me that they would fight for my baby and me. We will never know exactly how many people around the world were part of the Soviet Jewry Movement, but I remember thinking then that millions participated. That belief helped us live and continue fighting.

I was so afraid then. I had been married for only a few months to one of the country’s most unrelenting Jewish activists and underground Hebrew teachers, Lev Furman. Lev lived in Leningrad, and I first heard his name on the U.S. State Department’s Voice of America radio station. I met him at the home of our mutual refusenik friends in Tbilisi, where I moved from Kiev to escape prosecution. We knew each other a week before Lev asked me to marry him. He was a zealot of the refusenik movement willing to pay any price for the freedom of his family and that of his people. I had just discovered I was pregnant and three months into my pregnancy when a KGB officer told me that they would make sure my baby and I never made it through the delivery if Lev and I continued our battle. Suddenly, I was no longer sure if I was also willing to pay any price for freedom. The threat came just before Hanukkah, a holiday that celebrates miracles. I remember lighting the candles and praying for my own miracle, but I knew the brutality of the regime we were fighting too well to believe that miracle was possible. I wanted freedom too, but I wanted my baby more, even if I loathed life in the Soviet Union.

Lev, other refuseniks and the movement helped me find the courage to continue fighting and not give in to threats of the evil dictatorship. My people, known for never being able to agree on anything, were uncannily united in what they believed was their life’s mission — saving and freeing Soviet Jews. I was that Soviet Jew. Love of people who heard our story, held our hands, wrote petitions, lobbied and protested in the streets of cites worldwide saved me and allowed me to become a mother, to hold my baby girl and eventually find our way to a preciously free life. Aliyah was born a refusenik but had to spend only 13 months in the Soviet Union. On the eve of Israeli Independence Day on April 20, 1988, we landed in Israel, and little Aliyah and her family made their big aliyah.

Now the baby that was saved by the love of the Jewish people has found her own love: Ari, a remarkable and pure young man – every parent’s dream son-in-law. His parents, as we found out shortly after Aliyah and Ari met, were part of the Soviet Jewry Movement. This is the thing about movements – movements are people and one never knows when a cause, a right thing to do, can become a very personal part of your family’s future.

Being the deep Jewish souls they are, Aliyah and Ari picked the date of October 18 to get married, because 18 signifies life in gematria [Jewish numerology]. In the midst of bridesmaids and champagne toasts, Aliyah showed me her bouquet, which had a metal refusenik bracelet with my name on it, which supporters wore to show their solidarity. My makeup was on, so I made a heroic effort not to cry but quickly lost it. I lost that battle again and again when Lev blessed his girl during the bedeken, when I saw Ari and Aliyah’s glorious smiles when they saw each other for the first time, when we all danced 40 minutes of a hora that felt more like a victory dance.

When we walked into the room full of guests and the wedding began, I did my best to stay in the moment, but it quickly became too surreal. The people who promised to fight for me and my baby were now here to tell me how beautiful that baby looked, how they sat on the stairs outside our Leningrad apartment and cried out of fear that Aliyah would not survive, and now they were about to witness her getting married. Friends from across the world swallowed joyful tears, yet I could see in their eyes shadows of memories stealing them from the present and taking them back. We walked this road together, and in order to reach the finish line, we had to take a look back at the beginning. Then in stark juxtaposition to that beginning was our new family, our new friends and so many young people, singing and dancing and overcome with joy.

As we stood outside the ballroom waiting for the ceremony to begin, I looked at Lev and in his eyes I saw not tears but rather triumph, ecstatic joy and disbelief. As Ari’s nephews and niece walked down the aisle, I heard everyone laughing before the violin started playing “Jerusalem of Gold.” We reached for our girl, took her hands and started walking down the aisle and toward the future.

As Ari and Aliyah’s five-month anniversary approaches, I want to start a new movement, one that will tell the glorious story of our mutual fight and victory to the generation that needs it now more than ever. Our people saved a million and half Soviet Jews and created magical moments like the one I described for thousands of parents and their children.

If we want our youth to share our ideas, we have to inspire them. We can’t only remember and tell young generations stories of us as victims and forget to tell the story of when we were victors. Let’s change our narrative, stop predicting the end of the Jewish people and remember that not so long ago, we as people wrote the greatest love story for one another, the one that helped baby Aliyah defeat a cruel empire to survive, live and find love. We don’t need to be inspired by uplifting and dramatic stories played out on movie screens – we just need to remember our own triumphs.

Marina Furman is a regional director of the Jewish National Fund for Eastern Pennsylvania and Southern New Jersey.

A Refusenik Survives With Love and Pride