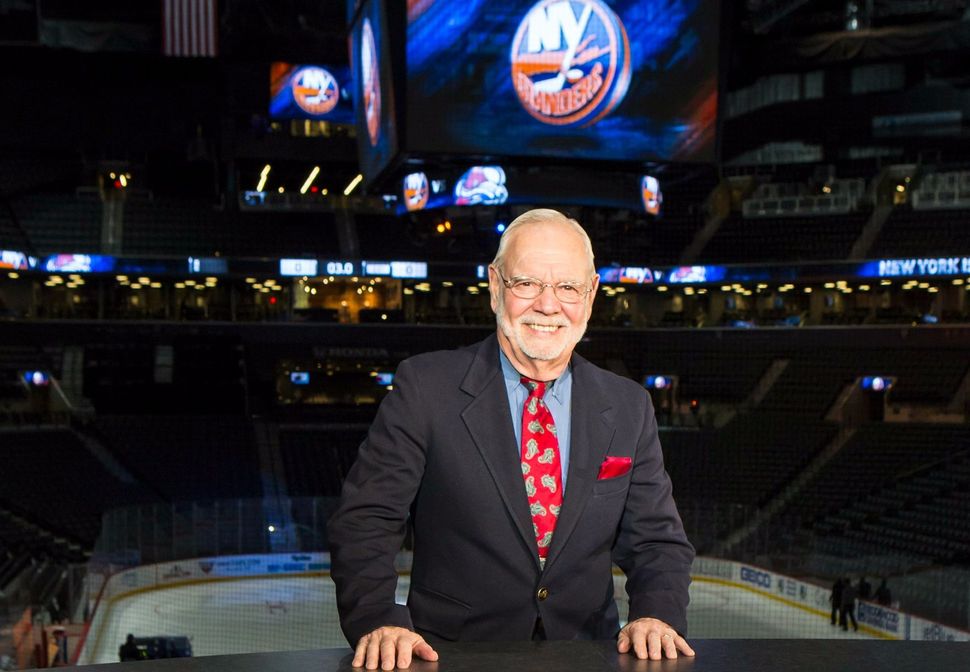 Stan Fischler loves his hokey jokes. “When my aunt made me hot chocolate, my uncle would say to me, ‘Stan, do you want some snoo with your chocolate?’ and of course I’d say, ‘What’s snoo?’ And he’d say: ‘Nothing. What’s snoo with you?’” Deadpan, Fischler turned to me. “Now ask me if I’m comfortable.”

The winner of seven Emmys, and known as the “Hockey Maven,” Fischler, 83, has served as Madison Square Garden’s resident hockey historian and expert for 40 years, employing his inimitable New York accent for pre-game show features and post-game interviews with players and coaches for the New York Islanders and the New Jersey Devils.

Fischler is also a subway, train and trolley aficionado who has written more than 100 books, mostly about hockey, including “New York Rangers: Greatest Moments and Players,” “The Handy Hockey Answer Book,” and “Subways of the World.”

Fischler performed comedy in the Catskills in the early 1950s, and is currently working on a joke book.

“I was the drummer in a band called ‘Joe Banana and His Bunch,’” he said. “Music with appeal.”

When I met up with Fischler at his apartment on Manhattan’s Upper West Side, on West 109th Street, it was filled with family photos, albums, sports memorabilia and piles of arcane miscellany, including vintage sheet music, commemorative political buttons attached to a degraded felt hat and a 1950s hockey stick. An Emmy statue and a small Israeli flag were part of one shelf display. Two bikes were propped up against a wall.

In contrast to the casual setting, Fischler was formally attired in a tie and jacket, a spiffy red handkerchief in his left breast pocket. He is in great shape, a fact he attributes to heavy-duty coffee-drinking and to eating all-bran cereal (preferably with raisins) and horseradish. He loves his Gold’s horseradish. He also credits his great shape to his adolescent-like enthusiasm that, he said, “teeters between the ages of 15 and 16.”

Fischler is an anomaly in the press box, claiming he is unfamiliar with the term, “ageism.” He says that most of his colleagues are happy that he’s still in the business.

“Working with Stan isn’t just fun; it’s a gift,” said Howie Rosen, longtime MSG Networks broadcaster and current play-by-play announcer for the Islanders. “Here’s a guy who has lived and breathed hockey for about 70 years, and he can tell you something about every player who has played the game over that time span. and given the opportunity, he will. He may be an octogenarian, but he has more energy than most people I know who are half his age. Best of all he knows, as per New York vernacular, that you don’t ‘get’ a haircut, you ‘take’ a haircut. For that alone he belongs in the Hockey Hall of Fame. We must make that happen.”

When Fischler joined SportsChannel New York (now MSG) in 1975 “it was so primitive,” he said. “There were no producers and no formats. We would do interviews between periods, and we could do all kinds of crazy stuff, loosey-goosey shmoozing. Now you need permission for everything you say or ask on the air. It has to be ‘relevant,’ and it’s formatted almost down to the second.”

Fischler has mixed feelings about the 24/7 digital age, which has forged a news environment that embraces speedy postings of the latest, hottest factoid, often based on rumor and gossip, before the competition beats you to it. At the same time he appreciates the platform that social media has given him to be on top of events, or to be among the first to report a poor call in a game and launch a conversation.

Fischler says he is especially proud of the dimension and variety he has brought to his various roles. Right now, he’s doing a series of short features on Brooklyn for MSG to welcome the Islanders to their new home at Barclays Center. “Stan Fischler’s Brooklyn Beat” has explored Brooklyn Bridge Park, Downtown Brooklyn and his favorite neighborhood, Coney Island.

“I call myself a Brooklynite, not a New Yorker,” he said. “As a kid I played ice hockey at the Brooklyn Ice Palace, seven blocks from Barclays, and I grew up at 582 Marcy Avenue. I know it’s a cliché: We were very poor, but had so much fun, we didn’t know that we were poor.”

He rose to his feet abruptly and rushed out of the room to retrieve a photo album filled with fading photos of long-deceased family members and street scenes that no longer exist the way he remembers them.

Fischler pointed at one shot and then another: “Here’s my father. He always had a fat cigar in his mouth. Phillies were the big ones. Between the Acts was the cigarette size cigar. And here’s a photo of my aunt, unmarried, very pretentious. My father didn’t like it when my mother talked with her on the phone too long. When he wanted the conversation to end, he’d shout out, ‘Period.’”

Fischler grew up in an Orthodox home (though occasionally he ate bacon), and to this day he is deeply committed to his Jewishness. He will not work on the first day of Rosh Hashanah or on Yom Kippur, and if a major game falls during Passover he brings the Haggadah and matzo to work and says a prayer or two before launching into his on-air spiel.

He divides whatever time he can spare for religious observances between the Conservative synagogue Ansche Chesed, on 100th Street at West End Ave — where his two sons, Simon and Ben Fischler, celebrated their bar mitzvahs — and the Orthodox synagogue Congregation Ramath Orah, around the corner from him on 110th Street. “I’m ecumenical in my religious practices,” he said.

He had planned to move to Israel with his wife when he retired. Tragically, Shirley Fischler died of cancer in May, 2014. The couple worked together for decades, collaborating on books and articles, and hosting table hockey tournaments. But Shirley Fischler will perhaps be most remembered as a trailblazer for women sports reporters, covering sports in the early 1970s — on the field, in the locker room — when it was just not done.

She was also a devoted soul mate willing to live near one of Fischler’s beloved subway stations. (It’s an obsession that dates all the way back to childhood. His family never owned a car, and traveled only by elevated train, subway or trolley.) When Fischler was 3 years old, the Myrtle-Willoughby subway station was launched on Marcy Ave near his house, setting the stage for his impassioned life-long love affair with public transportation.

Fischler adored riding in the subway’s front car, staring out the window as the train barreled down the tracks, especially when he could stand on a flip-out seat near the window for an even better view, a practice that has long since been done away with.

The loss of the subway’s accessible front window is even worse, he says. The C and a few 7 trains are the only ones that still have it, and whenever Fischler finds himself on the C he still heads for the window. He’s also a great fan of the 7 train, especially in Queens as it glides along curving tracks that almost evoke a roller coaster. He toyed with the idea of being a motorman and a professional hockey player, though both dreams were short-lived.

So, how did a nice Jewish boy get into ice hockey?

Actually it was serendipitous when his father, a great sports fan, took 5-year-old Stan into Manhattan to see “Snow White and the Seven Dwarfs.”

“If you did not see ‘Snow White’ you were not a certified kid,” Fischler said. “It’s like not seeing ‘Star Wars’ today. Anyway, when we got out of the subway at 50th Street, it was a downpour, what I call Hollywood rain. That’s sheets of rain, because Hollywood has never learned how to create a drizzle. Anyway, my father didn’t want to walk to the movie theater a few blocks away, so we ended up going to Madison Square Garden. It was on Eighth Avenue between 49thand 50th streets.”

Young Stan was enraged because he missed “Snow White,” but he was engrossed by the game nonetheless, especially when the Washington Eagles, the team he was rooting for, chosen because his father favored the opposing team, won. He discussed the game during show and tell in school the following week and copped an “A” for his efforts.

“Hockey’s pretty good,” he told me he remembered saying to himself. “I started going every week and I was hooked. I’d get free tickets from the local police precinct because my mother volunteered with the Police Athletic League .”

Fischler played hockey as a teenager, but soon realized he wasn’t cut out for it professionally. “If you want to be a goalie, and that’s what I wanted, you have to do those splits,” he said. Charging to the center of the living room, Fischler began a split, legs stretched wide apart, lowering himself and almost making it straight down to the floor, while moaning and groaning all the way: “You’re laughing. I could give myself a hernia.”

At Brooklyn College, Fischler majored in history and then in sociology, later earning a master’s in education at Long Island University while covering sports for The Brooklyn Daily Eagle. He went on to work at the New York Journal-American. In 1966 he took over as New York bureau chief for the Canadian newspaper the Toronto Star, a post he held for the next 11 years. When he was ultimately offered a professional TV gig he was not interested, “because I thought it would taint my literary talents,” he conceded. “But when I found out what they’d pay me, I stopped worrying about tainting my literary talents.”

During his career, he has seen the game progress on many fronts, starting with the number of teams in the NHL expanding, from six to 30, and widespread TV coverage. Fischler has witnessed the birth of a fledgling women’s hockey league and an effort to attract more qualified black players.

“There is no racism in hockey, never was of which I am aware,” he said. “Players are judged on ability. Hockey players mostly come from Canada, and there were few African-Canadian players relative to whites. Now more and more African Canadians and African Americans are in the NHL.”

Safety concerns have moved front and center. Players wear helmets, and goalies wear masks. “That’s a huge change,” he said. “Also, the game has achieved higher speed. And because players are getting bigger and bigger there’s less room on the ice to maneuver. The NHL addressed this with three on three in overtime. At some point the rink size may be enlarged.”

Fischler loves his day job and says he is happily anticipating his new project, the joke book. “But that’s another story,” he said with a sly grin and a slight pause, just like the standup comic who teases the audience members in the hope that they will ask for more.

Simi Horwitz received the 2015 New York Press Club award for two Forward pieces on the interplay of gender and ethnicity. She also won a 2015 Simon Rockower Award for a Forward article on environmental art.