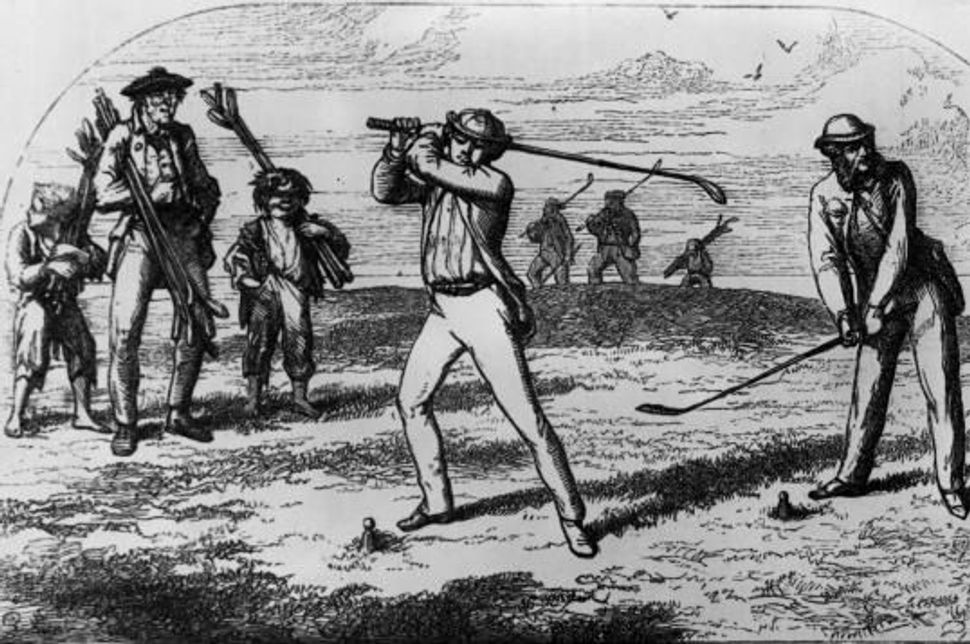 I’ve gone to South Florida to give a talk. But first, there’s lunch with the relatives whom I haven’t seen in over a decade. We meet at “the club.” The centerpiece of my cousins’ lives, everything is oriented around it, from their homes to their calendars.

We keep the conversation light, and talk of children and grandchildren, of physical ailments (creaky knees, leaky heart valves), of the homeowners association and of golf — and more golf. Just when I think we are going to run out of steam, one of my cousins leans over to me and, in a tone that verges on the confessional, tells me how he cannot believe his good fortune. He marvels at how he, and the rest of the tribe, has gone the distance from Brooklyn to Boca.

I marvel, too. When Harper’s Weekly first observed in 1901 that the nation had “gone to golf,” it did not have the Jews in mind. How did it come to pass that people like my cousins enthusiastically took up the sport when, for so much of their history, its pursuit lay beyond the pale — geographically as well as culturally? It was one thing, after all, to play basketball, that “manly sport,” at the local Y or neighborhood park. But golf?

The sport required a lot of room. Acres and acres of it. It was expensive, too, what with the cost of the equipment, the club fees, the special duds. Golf was also exclusive. Or, more to the point, exclusionary. On the fairway, the quality of one’s pedigree was what mattered, not the quality of one’s swing. Jews were simply not welcome.

Not that this disturbed anyone in the least. Within the tastefully furnished rooms of the clubhouse, the occasional hullabaloo had more to do with a breach of sartorial rather than social taboos. The prospect of being ill-clad raised more hackles than the practice of discrimination. When, in the early 1930s, women golfers first took to wearing shorts on the links, claiming there was no reason for them to be “bundled up like Eskimos,” they were barred from participating in several tournaments. This policy was quickly condemned. “What right have men to be more comfortable than women on the golf course?” the aggrieved women golfers demanded to know.

As for the rights of others, well, that never came into play or into focus. Club members preferred not to notice, while American Jews preferred to construct a parallel universe of country and golf clubs rather than make a fuss. By the mid-1920s, according to a census compiled by The American Hebrew, which closely followed the recreational pursuits of its affluent readers, 58 Jewish country clubs existed, from the Jumping Brook Country Club, in Hamilton, New Jersey, to Westwood Country Club of St. Louis, Missouri, and the Golf Park Country Club, in Miami, Florida.

Apart from the names on the membership rolls, little distinguished Jewish country clubs from non-Jewish ones. Those who belonged played golf, tennis and polo; grouse hunting was also an option. As they watched the golf course supplant the synagogue, especially on a Saturday, American Jewry’s religious leaders took a dim view of their congregants’ newfound enthusiasm for the sporting life. Others, though, thought it a good thing. “The physically bent back, the puny muscles, the dimmed eye are vague memories of an era in which the average American Jew of today knows nothing about,” The American Hebrew observed in 1920, hailing the emergence of a new type of Jew: the healthy sportsman. Gene Sarazen, U.S. Open champion of 1922, concurred. Thanks to the country club, the American Jew, he related, “has absorbed many of the habits, customs and social amenities of the American non-Jew.”

Snobbery, as it turned out, was among those “habits and customs.” Like their gentile counterparts, Jewish country club members were just as quick to succumb to prejudice. They, too, practiced exclusion, making sure to keep their distance from their co-religionists of East European descent. “Our membership,” proudly explained the Golf Park Country Club, is “chosen with the utmost discrimination” and constitutes a “social roll of honor.” You can bet your bottom dollar there were no Max Weissmans, David Snyders or Sol Rabinowitzes on that roster.

How, then, to account for the popularity of golf among their descendants? Suburbanization, and with it the growing affluence of postwar American Jews, goes far in explaining its hold. Many residential developments on Long Island, for instance, were centered around a golf course, and the cost of belonging to the club factored into the price of a home. For the hundreds of thousands of American Jews who, throughout the 1950s and ’60s, exchanged an urban address for a suburban one, golf was now well within reach.

I suspect, too, that taking up golf was a way to lay claim to America, to share in one of the nation’s pastimes — and pleasures. To belong to something larger than oneself. I’m not suggesting that when my cousins and their golf buddies head for the links three times a week, their heads are filled with thoughts of acculturation and integration. They play golf as frequently as they can because something about the game — its leisurely pace, its geniality — appeals to them, not because it is an exercise in social engineering.

Even so, it’s hard to resist the notion that, as one American Jewish observer put it nearly a century ago, the rise of the Jewish country club was part and parcel of the “chronicle of the tremendous advance of Jews in America.”