Isn’t There Someone Out There Who Wants To Buy Alan Dershowitz’s Judaica? 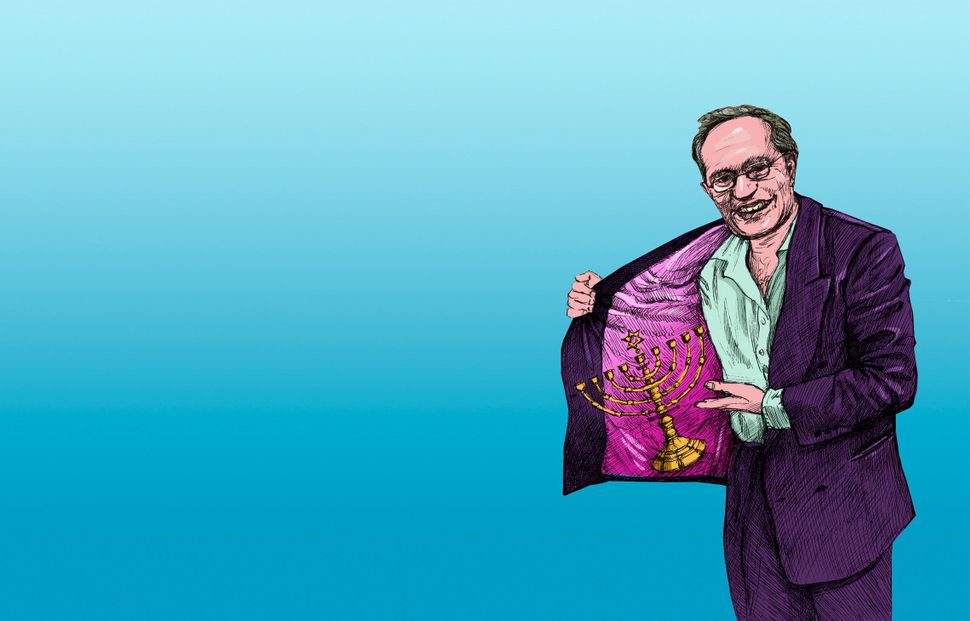 I have to preface this story by admitting that I did not know who Alan Dershowitz was until about a month ago. (Hi, Alan.)

I was writing a different article for this newspaper, about the collection of the Valmadonna, a famous Judaica library broken up and sold in pieces, and I was speaking with an auction house owner named Jonathan Greenstein. At the end of our interview, Greenstein told me his next auction would feature selected pieces from Dershowitz’s collection. Awkward silence ensued, and when it became clear I had no idea who he was talking about, Greenstein asked, “How can you consider yourself a writer for the Forward when you don’t know who the most famous New York Jew is?”

I mumbled and sputtered, and then we hung up. When I later told a co-worker about this comment —she is in her mid-20s, like I am, she said: “What? Jerry Seinfeld is the most famous New York Jew.”

Of course I spent the next few hours researching Dershowitz, and in a major blow to my ego I discovered he represented O.J. Simpson, among other notorious defendants tried for murder. I was hoping he was some obsolete man, long dead and now just a part of history, whom only select people would know. Nope. He’s very much alive, and, well, as Greenstein said, famous. He’s a devout Zionist, a Harvard professor and the author of several books, including “The Case for Israel,” “The Best Defense” and “Chutzpah.” He’s outspoken in the media, and when I relayed the Greenstein conversation to another friend, also in my age range, she said, “Oh, I love him,” referring to Dershowitz.

On March 1, the night of Greenstein’s auction, I took the Long Island Railroad to Cedarhurst, a town about an hour from the city, in the shadow of John F. Kennedy Airport. It has a large Orthodox population. Hence, along the main street, Central Avenue, there’s a kosher bagel store, a wig shop, a place called Judaica Plus, and a grocery store that stocks Israeli canned food alongside Hellman’s mayo. The area was quiet and mostly deserted by 5 p.m., except for after-school children wearing yarmulkes and studying at the math learning center Mathnasium, and groups of Orthodox women eating at the diner. Planes roared overhead.

I located the auction house on a street corner on Central Avenue. White curtains hid the interior. Through a small vestibule, I came upon a carpeted rectangular shop with scratched faux wood walls and fluorescent lights. Stacks of silver Seder plates and menorahs were stashed in glass cases along the perimeter. It reminded me of a mix between my grandmother’s living room and a synagogue’s storage room.

Dershowitz recently moved to Miami Beach, and he told me during a phone conversation, that he no longer has room for his entire collection. He began collecting as a child, first baseball cards and comic books. During law school, he turned his eye toward Judaica in an attempt to rescue items from European flea markets, like a Megillat Esther from the 1930s. He’s auctioned off items before, but claims he doesn’t know whether it’s his name that draws interest.

Joy Schonberg, formerly the head of the Judaica department of Christie’s International who now has her own gallery, attended the auction in Cedarhurst.

“What you saw in that were the worst pieces he wanted to get rid of,” she said later. “Those pieces were not star pieces.” Some of the items he discarded included a silver Torah pointer, a charity box and a silver spice container in the shape of a scaly fish.

Before the auction began, four middle-aged Jewish traders poured red wine into plastic cups and passed around a plastic takeout container filled with rugelach as they inspected the items up for bid.

The room slowly filled up as the auction got underway. More than 100 items were up for bid before Dershowitz’s lot. A public relations woman named Karen sat down in front of me. She had a 1980s-style hair-sprayed pouf and bore a certain resemblance to Grace, the school secretary in “Ferris Bueller’s Day Off.”

In front of the 24 folding chairs, Greenstein stood behind a long, high table. His family, including his two sons and sister, sat around him, manning the plastic landlines and the two computers as if they were part of a command center.

It took over an hour to get to Dershowitz’s lot, and as it creeped toward lot number 129, his starting point, I thought, “Okay, here we go.”

But then, to my surprise, a handful of people left, including a blinged-out couple who had bid $14,000 on an earlier item; the wife wore a gold Moschino belt, Chanel cowboy boots and matching bag, and had a manicure the color of Barbie’s hot-pink convertible.

The traders in the back, who had been drinking, began talking over Greenstein. He had to “shush” them several times, at one point joking, “This is like shul.”

Greenstein called out the first item, a Kiddush cup from 1890, to crickets and blank stares. No one purchased it.

Several of Dershowitz’s pieces didn’t sell, and those that did sold for lowly prices of several thousand dollars, except for a “rare” megillah in a bell-shaped gold case, which sold for $13,000; Schonberg said it was a nice piece. Schonberg has been selling to Dershowitz for 15 years. He reportedly owns pieces in the $20,000 price range that he most likely won’t part with, including a pair of handcrafted ivory cups with biblical scenes, estimated to be worth around $100,000.

Dershowitz later claimed he was happy with how the auction turned out. He was on an airplane to New York City to see the opening of his daughter’s play “Connected.” so he followed the bidding online.

“It’s a question of taste,” he said of the pieces that didn’t sell.

His lot wound down with little excitement, and my mind wandered. It’s true that these items seemed unspectacular and therefore unlikely to draw much attention. But I wondered why the name didn’t add the value as I expected it would. Maybe I wasn’t the only Jew oblivious to Dershowitz’s prestige.

I fished my cell phone out of my purse to text back to my best friend. She is knowledgeable about Jewish news and figures, and more involved in Jewish organizations than I am.

“Do you know who Alan Dershowitz is?” I texted.

“Not all Jews know each other,” she wrote back.

Isn’t There Someone Out There Who Wants To Buy Alan Dershowitz’s Judaica?