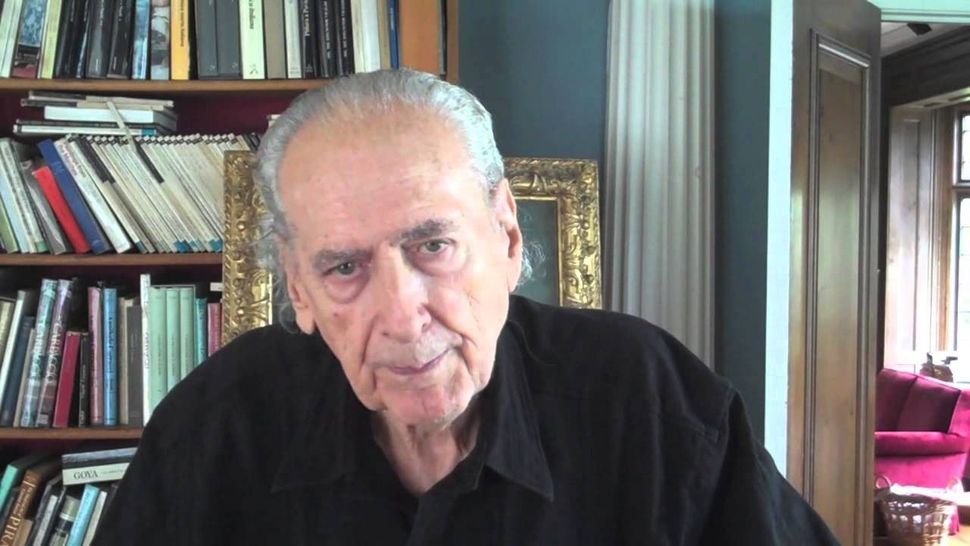 At 90, poet and editor Stanley Moss is as busy as ever. Following the publication of his latest collection, “It’s About Time,” he’s readying himself for a tour of Europe, editing manuscripts for Sheep Meadow Press, and of course, continuing to write. A sardonic visionary and voracious raconteur, Moss has had a substantial influence on the world of American poetry, not only through his own work, but also through the poetry he edited, published, and promoted. The Forward’s Jake Marmer sat down with Moss to get a glimpse into his world.

Jake Marmer: When did you first become aware of yourself as a poet?

Stanley Moss: There are certain things that are part of me, that represent my likes, loves, and hates, that are different from most other folks. I do not eat fruit. I am revolted by raw tomatoes, although I love tomato sauces. Why? The only person I know who had the same total dislike was [Pier Paolo] Pasolini — I discussed the matter with him, he also hated vegetables. Giving the matter a certain amount of thought, I’ve come to the conclusion that I connected eating fruit with overhearing my mother and father doing it. Dr. Arnold Cooper, who trained most of the psychoanalysts in New York City and who was a close friend, asked me why I didn’t eat fruit. I said, “You don’t want to know.” Fifteen minutes later he said, “I do want to know,” and I gave him the above explanation. He said it sounded pretty good.

At age two or three, I walked with my father holding hands while he recited Shakespeare out loud, because he had to learn certain lines for an examination he was going to take.

I had a girlfriend who was a rather famous actress, who came from an acting family. She played Cordelia when she was young. She said, “I wouldn’t know what it was like to be close to Shakespeare when you were 18 or 19, they didn’t teach you that at Yale.” And I said, “Sorry, I started learning Shakespeare age 2.”

I never got in a fight when I was a kid. 1. I could hit a baseball farther than anybody in the school, and 2. I knew early on that I had better weapons than my fists — words.

When I was six weeks old I had a whooping cough — in those days a fatal disease for infants, because they have no gag reflex — so my mother, when I gagged, would put her finger in my mouth and pull out the phlegm. Knowing my mother, she put her finger in when there was no phlegm.

I also fell down a flight of marble stairs, age two or three, and split my tongue in half. I tell you all these things because I think they are more likely to make a poet than MFA programs.

I’ll settle for that. What was the impetus of starting Sheep Meadow Press”? What were some of the tensions of being both a poet and a publisher?

On December 7, 1941, there was a famous announcement on the radio, at 3 p.m. New York time: “We interrupt this program to announce that the Japanese have bombed Pearl Harbor.” The program they interrupted was the Philharmonic Orchestra, and I heard that announcement. I was listening to the music on WABC while I worked over the dummy of my high school literary magazine. I also had a full page in the Newtown High School X-Ray and I wrote a column called “Humoresque”: funny poems and not-so-funny poems.

Something you might look into: In his recent review of the Yehuda Amichai collected, just published by Farrar, Straus and Giroux, Stephen Greenblatt talks about the various translations. He singles out as the best Ruth Nevo’s translation of “Travels of the Last Benjamin of Tudela.” Now if you want to see Ruth Nevo’s translation, get the original version, published in the U.K., and compare it to the version I published under the title of “Travels,” and you will see there are vast differences. The vast differences represent my contribution, and I assure you there was no tension between Yehuda and me.

Yehuda highly disapproved of something I said when we went swimming together in the Dead Sea. In Israel there’s no sandy beach, just pebbles. I could hardly walk on the beach it hurt my feet so much, but Yehuda had no trouble at all. His feet were tough and hard. I said, “Did you ever consider the bottoms of your feet aren’t Jewish?” He very much disapproved of that statement. I recently told that story to his wife, and today his daughter phoned and I told her the story, and they both laughed their heads off. Other things we disagreed about: I am not a believer, and from time to time I would come out with some “no God” statement, and he, who loved bacon, etc., said with a wise smile, “Design, design, design…”

Again, you speak of tension. You may be amused to know that on my mother’s side of the family some referred to tension as “urination?” “Do you have tension?” meant, “Do you have to piss?” The same girlfriend spoken of above used to sometimes refer to me as “the tornado.” I may be terrified, show anger, have wrath (not the Achilles kind), but not tension. I pay attention to things some people don’t choose to notice, and for some reason “tension” is in the word “attention.” My hands have been shaking with “essential tremor” all my life. The word “essential,” medically speaking, is used when there is no known medical cause.

Speaking of essentials and the basics: The actual title of the new book, “It’s About Time” is a pun that reflects the book’s theme of time and timelessness, and a certain exasperated, if comic, impatience. I understand the former — can you talk a bit about the latter?

Exasperation? I am 90 years old. I think I wasted time with ecstatic, unhappy love affairs, sports, crazy politics (thinking I could change the world, although I am convinced I would not write if I did not think writing a poem makes an ever so little difference, is useful to me and others). When I am impatient with my not understanding, writing a poem about it informs me. English is a largely Christian language. I write Jewish in a Christian language. Also, I write Christian, Buddhist, Taoist, Atheist, baby talk and dying-old-man talk, I write in last gasps, first cries, awake and dreaming, and I am animal, vegetable, and mineral, all the winds, and I break wind in answer to your question.

Do poets, like wine, get better with age? Wiser and craftier? I’m thinking of Thoreau, who wrote, as a 30-year-old man, “Practically, the old have no very important advice to give the young, their own experience has been so partial, and their lives have been such miserable failures, for private reasons, as they must believe; and it may be that they have some faith left which belies that experience, and they are only less young than they were.” Do you agree with him?

You think of Thoreau. I think of Rimbaud, William Carlos Williams, Stevens, Yeats, and Shakespeare. Advice to the young: write a poem about something you don’t understand. Remember, the Devil generalizes and angels are specific. Never an extra word, never an extra syllable. And dine on the food of love.

Jake Marmer is a poet, critic and educator.