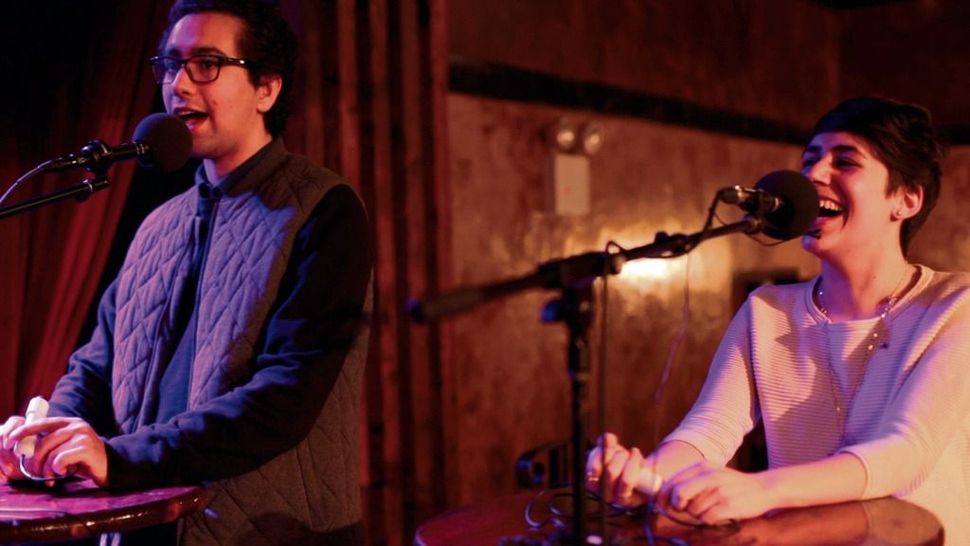 Ask Her Another: NPR publicist Hugo Rojo and Forward contributor Talya Zax at a rehearsal for Ophira Eisenberg’s show. Image by Thea Glassman 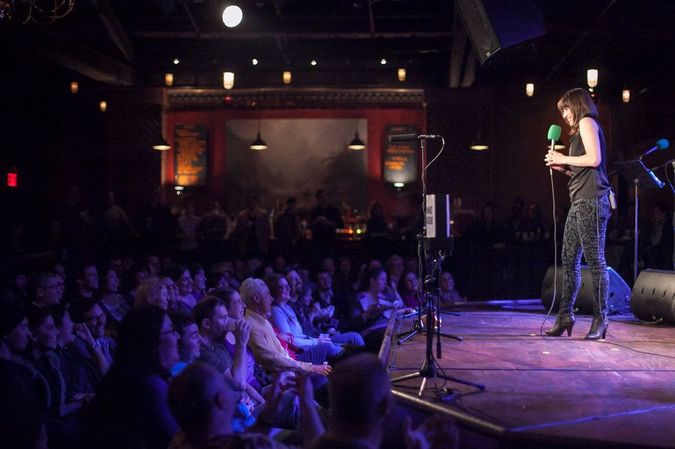 Image by Courtesy of NPR

Editor’s note: Some nine years after its debut, NPR’s “Ask Me Another” has come to an end. In 2016, the Forward’s Talya Zax profiled Ophira Eisenberg, the show’s host. In honor of the show’s conclusion, we’ve republished that profile.

Hectic strains of unidentifiable indie rock drift over the audience. Mostly white and mostly well-dressed, they chatter eagerly under The Bell House’s wood beam ceiling — which wouldn’t look out of place in a hunting lodge — and take advantage of the venue’s supply of good, cheap beer: in Brooklyn, a rarity.

As we waited for a live taping of NPR’s “Ask Me Another” to begin, I couldn’t help swiveling in my chair to examine the rest of the audience. When the trivia show, always recorded live, first aired in 2011, I heard that it was part of an attempt to extend NPR’s appeal to a younger, more diverse crowd. While diversity was lacking here, I could see the impact; it’s hard to think of another radio show that would come to mind as a fun first date, and I thought I spotted several of those. I’m new to New York, and don’t have an especially wide social circle, but in this crowd of hip, self-consciously nerdy folk, young and old, I felt sure I would see someone I knew.

Well, I mostly wanted to see someone I knew. I wanted to brag. Among a certain set of people, meeting a public radio personality is a bit like meeting George Clooney. Friends of mine have spoken breathlessly of being in the same room as Ira Glass; when Jad Abumrad and Robert Krulwich from “Radiolab” made an appearance at my alma mater last spring, I feigned illness and escaped my job so that I could see them speak.

Ophira Eisenberg, the standup comic who hosts “Ask Me Another,” is on her way to becoming one of the hosts to be fluttered over. And I, by a stroke of luck, had spent the afternoon filling in for the evening’s contestants during rehearsal for the show, trading what I hoped was witty banter with her and the program’s other mainstay, in-house musician Jonathan Coulton. Surely this should have earned me some social points.

Before meeting Eisenberg, I thought I’d done enough research to have a handle on her humor: wry, warm, self-deprecating. (Take, as an example, the title of her 2013 memoir, “Screw Everyone: Sleeping My Way to Monogamy.”) Watching her warm up the crowd before the taping began, however, I was struck by how elegantly she could lacerate others, making jokes so finely pointed as to leave their subjects smiling happily for several seconds before realizing they had, in fact, been made fun of. She has a knack for locating the chink in someone’s armor and attacking it with a full-on, devastating succinctness.

Appearing onstage in jeans, a black blazer and a pair of blindingly shiny gold shoes, she surveyed the room with a correspondingly bright smile.

“It’s less glasses than I’m used to,” she remarked, neatly skewering the self-esteem of the room’s would-be intellectual occupants. I wilted in my seat and mourned my 20-20 vision.

Even her own child, a few months old, didn’t escape unscathed. “I think of it,” she said — “it” being motherhood — “as raising an intern.” 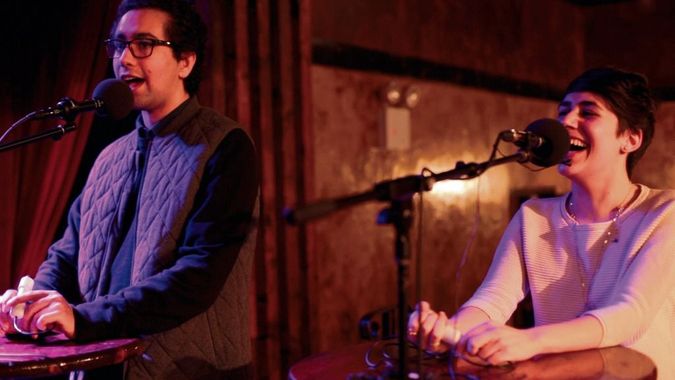 Ask Her Another: NPR publicist Hugo Rojo and Forward contributor Talya Zax at a rehearsal for Ophira Eisenberg's show. Image by Thea Glassman

Two days later we spoke at NPR’s New York Bureau Offices. Eisenberg, her amused blue eyes peeping out from beneath thick brown bangs, mused that her interest in that breed of gently ribbing comedy stems from the home where she grew up.

“I like to say that the currency of love in my family was making each other laugh,” she said.

“There was something about that, I think, that lodged in my brain and made me want to re-create that feeling of approval with strangers. To fill the hole. For the rest of my life.”

Eisenberg, the youngest of six children — and a full 25 years younger than her eldest brother — grew up in Calgary, Canada, where her Israeli father and Dutch mother immigrated in the late 1950s. She was raised Jewish, but by her own account, maybe not that Jewish. Onstage at the Bell House, she joked, “I was raised Jewish in Calgary, and now I came here and I thought, maybe I was raised Protestant.” When I asked her what initially attracted her to comedy, she responded, serenely, “I think it’s the traditional Jewish job.”

The full influence of her joke-loving family didn’t have much of an impact on Eisenberg’s trajectory, however, until she made her first foray into standup comedy during a few lonely and uncertain years in Vancouver, where she moved after attending college in Montreal.

“All of my friends became other comedians,” she said. “It gave me a focus for my life that I think I really loved, being so completely immersed in one thing.”

Moving first to Toronto and then to New York, Eisenberg poured herself into standup while working a variety of odd jobs. Now an established New Yorker — although not, she notes, a U.S. citizen — she hosts both “Ask Me Another” and, frequently, “The Moth,” a popular storytelling show and podcast. She does stand-up whenever possible, and although she’s gained enough status to headline at larger clubs, like Manhattan’s Gotham Comedy Club, she hasn’t lost her love for slinging jokes at tiny boisterous audiences in cramped, dark spaces. The training from her years spent doing as many shows as possible in whatever seedy venues she could book is part of what sets her apart as a radio host, adding an equal does of sparkle and sharpness to her performances.

“I spent a lot of time in comedy club basements telling drunk people to shut the f—k up,” she said, “which is a little bit different than the NPR sensibility.”

Onstage at The Bell House for the “Ask Me Another” rehearsal, I was nervous. Having just met Eisenberg, I found myself thinking about Miranda July’s October profile of Rihanna for The New York Times Style Magazine. “My understanding, from the moment she sat down, was that we were in love,” July wrote toward the piece’s end. “We were the most in love any two people had ever been.”

I didn’t think Eisenberg and I were either in love or destined to be, but even after a few minutes’ acquaintance I hoped that we could perhaps be in like. She was bold, sarcastic, funny, like my most distressingly hip high school teacher mixed with the daring best friend I’d always hoped to attract. At one point, chatting me up while I pretended to be one of the evening’s contestants, newly arrived to the stage to play a game called “Misunderstood” — I later learned this getting-to-know-you routine is one of her favorite parts of the gig — she asked me what people misunderstood most about me. “Blistering intellect,” I responded, wincing as I did. In my head, it had seemed like the perfect answer to win her, but as soon as the words escaped me I knew they were all wrong. (For the record, she did laugh. Whether or not the laugh was forced remains unclear.)

I wanted to leave our interaction with something more than a good story and some very, very good laughs. As I sat in the audience that evening, I began, I thought, to understand why. The actual contestants came onstage two by two. She would ask each of them questions, first scripted, designed to lead into the game at hand, and then riffing off their answers. Yes, she subjected them to that somewhat loving stripping away of pretense I noticed at the start of the show, but the process wasn’t diminishing; it was revelatory. They sounded like funny, smart, unassumingly well put-together people, exceptionally so. Even when the people joining Eisenberg onstage became the subjects of her jokes, everyone laughed with them — and with her — not at them.

I, too, had come to feel like a more exciting version of myself, rehearsing with Eisenberg despite my anxiety to impress her. I felt funny, even attractively so, and miraculously free from artifice. It was as if her laughing assistance led me to unveil a part of myself that was, secretly, wonderful.

As we left the taping, Hugo Rojo, an NPR publicist who had been the other stand-in at that afternoon’s rehearsal, remarked that all of the evening’s contestants had seemed very poised. We wondered how much they were told in advance about what they’d be asked, if there was any chance that they’d had the opportunity to prepare. I could have asked Eisenberg later, during our interview. I didn’t. I preferred to think that they rose to the occasion, that their humorous, enticing confidence was inspired by Eisenberg doing what she does best.

She gave me an idea of where that talent comes from. As we wrapped up our interview I asked her if she found it difficult to share the intimate details of her life. I’d been impressed, reading her book, by how comfortable she sounded writing about times in her life during which she’d been intensely vulnerable.

It took her awhile to work through an answer, but she ended up in a telling place.

“I’ve always been autobiographical onstage,” she said, “and I always felt that the moment I actually let myself kind of drop the disguise and go ‘Here’s what actually happened,’ that’s when people were super-engaged. People go, ‘Oh yeah, that’s exactly how human experience works.’ People are battling stuff every day, and we all just pretend we’re fine.”

So perhaps her secret is honesty, and her secret gift eliciting it — in funny, vibrant, beautiful ways — from everyone else. Who knows? It worked for me.