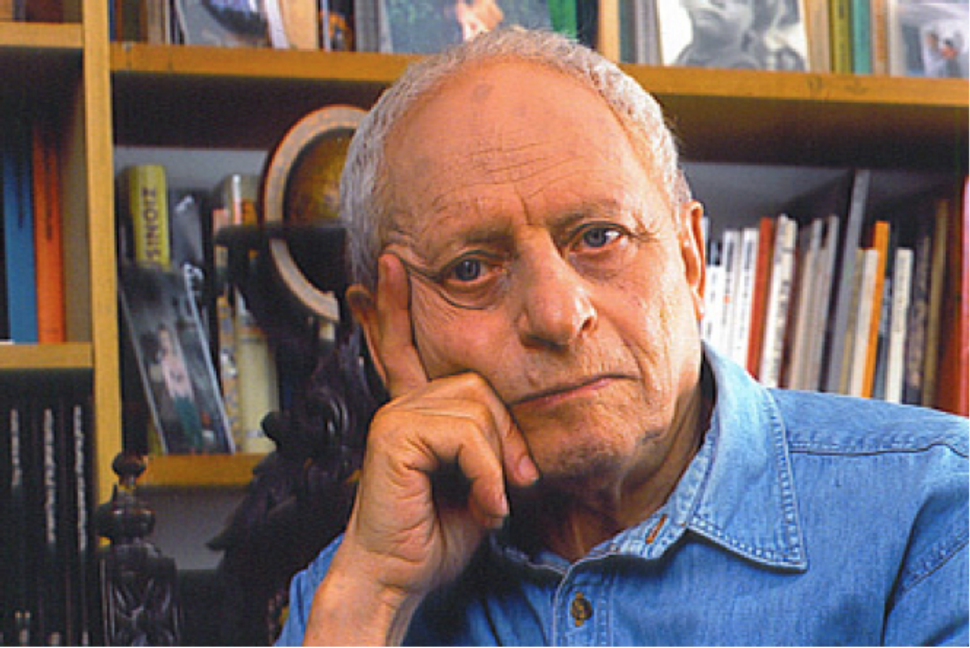 The Israeli writer Aharon Megged, who died on March 23 at age 95, was paradoxically multifaceted. His parents made Aliyah from their native Poland in 1926, changing the family name from Greenberg. Megged was part of a generation of pioneers who were ostensibly critical of the Diaspora, yet nourished culturally by European roots. As his parents were both Hebrew teachers, Megged was acutely aware of the language’s development in the modern era, yet he also paid heed to other nations’ literary traditions. Despite training at Kibbutz Giv’at Brenner in central Israel and working on Kibbutz Sdot Yam near Haifa for a dozen years, he was anything but the hackneyed stereotype of an inward-looking kibbutznik.

Still, he was an ardent advocate of the experience of writing in Hebrew, described in an article in “Encounter” from 1971,: “The revival of the Hebrew language is not like Lazarus arising by miracle from the dead. It is more like the Sleeping Beauty awakened by the Prince. She was not dead; she had only been dormant for a long time; and she was not rotten bones but a real beauty. Now, when you betroth her and bring her into your house, your problem is how to make this noble, aristocratic Princess, adorned with jewels and clad in purple, do all the domestic work, soil her hands, break her back in cooking, washing and tending the garden in the back yard. Contrary to Eliza Doolittle of ‘Pygmalion,’ she is quite all right at fancy parties, but she misbehaves in the market place.”

The reference to Bernard Shaw’s “Pygmalion” was not mere happenstance; in 1958, when asked by the Habimah Theatre to write a play about the World War II Israeli heroine and martyr Hannah Senesh, whom he had known at Sdot Yam, Megged’s overt model was Shaw’s play “Saint Joan.” Senesh, who parachuted into Yugoslavia in 1944 to rescue Jews, only to be captured, tortured, and executed by the Germans, was directly likened by Megged to Joan of Arc. An avid imbiber of British culture and literary lore, Megged’s novel “Mandrakes from the Holy Land” (1998; translated 2005) recounts how a turn-of-the-century closeted British lesbian flees an unrequited crush on Virginia Woolf’s sister Vanessa Stephen all the way to the Holy Land. There she undergoes a series of torments, described in letters and diary which are later annotated by a psychologist hired by her parents to diagnose her problems.

The notion of Britishness as an inherent form of repression was later explored by Megged, who from 1968 to 1971 served as cultural attaché to the Israeli embassy in London. In 1978 he gave a fiery interview to the JTA,, about Anglo-Jewry’s relative lack of interest in Jewish culture. When he was cultural attaché, he had hoped to establish a Hebrew cultural center in London, only to be thwarted by lack of donations. Megged complained that as of 1978, fewer than 100 university students in the UK were studying Hebrew, of whom many were not Jewish; by comparison, in France, seven times that number of students were avidly learning Hebrew. He diagnosed a “cultural degeneration,” condemning British Jews as inferior to their French counterparts. Megged also praised the USA for its comparatively vibrant Jewish culture, despite his 1956 play, “I Like Mike” (Hakibbutz Hameuachad), later filmed in 1961 by the Canadian-born director Peter Frye, a caustic broadside against American vulgarity.

Contradictions were to be expected, since Megged’s fictional protagonists were often literary people with all their habitual neuroses and woes. The novel “Foiglman” (1987; English translation, 2003) juxtaposes an Israeli historian with the eponymous Yiddish poet Foiglman, a Holocaust survivor. No less literary was Megged’s “The Flying Camel and the Golden Hump” (1982, translated in 2007) about a Tel Aviv novelist inspired by the works of Dante, Goethe, and James Joyce who is distracted when an acerbic critic moves into his apartment building, accompanied by his desirable wife. The imaginary novelist, who also plans to translate the French author Rabelais into Hebrew, is part of a characteristic galaxy of world literary references. As the novelist Tsipi Keller noted in a review, “The Flying Camel and the Golden Hump” is an “octopus of a novel, its referential tentacles reaching deep into the Western literary canon, as well as into the Mishna and the Talmud…”

Along comparable lines, Megged’s “The Short Life,” (1972, translated in 1980) is in part a gloss on Saul Bellow’s “Herzog.” In Megged’s novel, Elisheva Tal-Blumfeld, a lecturer in comparative literature at Tel Aviv University, indulges in extramarital romance and book chat about the Kabbalah, Saint Thérèse of Lisieux, Samuel Beckett, Marcel Proust, Leo Tolstoy, Simone Weil, and many others. Writings by Weil are dismissed as the “self-hatred of an apostate – and an ignoramus!”

For all his intense creativity in fiction and drama, Megged could also be a passionate writer of nonfiction, as in his “Story of the Selvino Children” (1984, translated in 2002), about how over 800 Italian Jewish children who survived the war were educated in Jewish culture to prepare them for moving to Israel. Like his parents whose instruction revived lost traditions for newly arrived immigrants, Megged’s profoundest loyalty appeared to be to the Hebrew language and those who read, write, and teach it.

This intense devotion was sometimes expressed with self-deprecating humor. In a 2014 documentary film by Omri Lior, Megged amusedly points out holes made by bookworms in volumes in his home library, alongside his personal marginalia “which are also rather worm-like.” A creative bookworm of lasting inspiration, Megged was buried on Thursday in the Kinneret Cemetery, near other pioneers of the Labour movement.