Can Jeremiah’s Missive of Love Survive in the Age of Emojis? 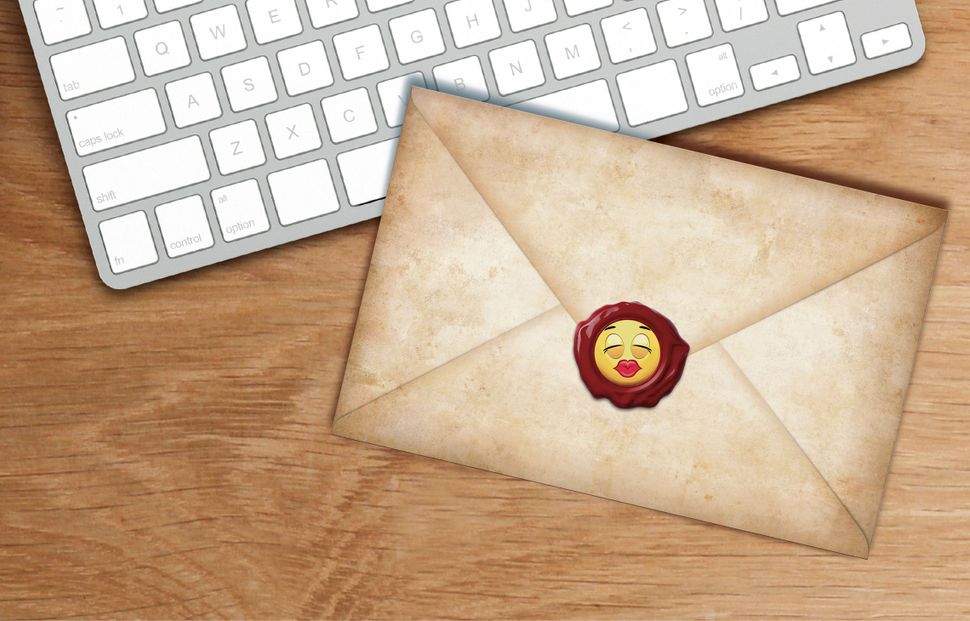 Newly engaged, Rachel was visiting her grandparents in Indianapolis. It was a cold Sunday morning, and the family was getting ready for a Colts game. Rushing to get to the stadium, everyone was looking for a bag in which to carry hats and sweaters. Rachel spotted what looked like a usable sack on the top shelf of a closet. “It’s probably junk,” her grandmother assured her. “Just empty the bag.”

As Rachel emptied the contents onto the dining room table, dozens of letters, neatly folded into envelopes, tumbled out. They were all handwritten to her grandmother by her grandfather, and were all postmarked the summer of 1957.

Later that evening, after the football game (no one remembers who won), the children and grandchildren sat in the living room reading letters, one written for each day of that long summer. They were laughing and blushing. One grandchild wondered, “Maybe we shouldn’t be reading these.” But, of course, they were.

Soon after, Rachel was in my office with her fiancé, Kyle, to discuss their upcoming wedding. She told me of her grandfather’s love letters and asked me to include some of his words in the ceremony. I agreed, even without having read them.

Rachel’s grandmother brought me the letters, still in the bag in which she had first saved them. The rest of the day I did nothing but read one letter after another, words of young love, promise and hope. They were all meticulously handwritten, addressed to “My Beloved,” “My Darling.”

I needed to share what I was reading with someone. That night, I read some favorite lines to my husband Dennis.

“Darling, I love you so much; I don’t know why, but I do. When I feel low or blue, all I have to do is to pick up… your letters and reread them and everything seems all right again. Just like a mother kissing a baby’s finger. I only wish, baby, you were here to kiss me. There is only one thing I want on this earth, and that is you and your love… Goodnight, my darling. May the good Lord keep you safe and sound in my absence. “

Dennis, a bit less of a romantic than I am, was moved. Only half-joking, I asked, “Why didn’t you send me letters like that?” This was 1970, long before texting. The only love note he wrote me when we were dating was on a Sunday school blackboard. He left it there, knowing I would be teaching in the same classroom after him. To be sure no one else would understand, he wrote his message in Ugaritic script! We were both rabbinical students and impressed by our newfound knowledge of Semitic languages.

Dennis and I got engaged while studying the Book of Jeremiah. The prophet is best known for preaching against sin and predicting disaster, not the most conducive text for a marriage proposal. Fortunately, chapter 31 contained the passage “With eternal love have I loved you,” spelled with 13 Hebrew characters. “Those are my letters to you,” he said. We engraved those 2,700-year-old love letters inside our wedding bands.

I was hoping to find the letters my parents had written each other during their courtship. When I asked my mom whether my dad had sent her love letters during the war, she responded, with a smile: “Yes, he sent lots of them. He knew that they were being censored, but he still wrote me as often as he could. He told me he loved me.” My father died in his 60s, and my mom was now in her late 80s. So I anticipated a theatrical moment when my mom would gently lift a neatly tied package of yellowed papers from a mahogany box. Alas, there was nothing. The letters must have been lost during a move. I wished I had that correspondence so that I could touch and smell the paper; see how my dad had formed his letters, hear how his young voice sounded before I was born. I realized that our grandchildren might never have such a treasure, either; in this age of technology, we write whatever comes to mind at the moment, and push “send” with little reflection. Emoticons are poor proxies for passionate statements of affection such as those from Rabbi Isaac Mayer Wise to his fiancée, Selma Bondi: “I will pour so much fire into your soul that you shall sing about love and praise it like Sulamith in the Song of Songs.”

What text message can replace the wisdom of Martin Buber’s 1902 letter? “Meditate upon all mysteries, but in one person who is yours, and you lie upon the heart of the universe. For everything is in everyone and only love can extract it.”

I have been trying to learn the acronyms for texting to speed up my communication, but something seems to be missing. A contemporary love message might read: ILU; Thinking of you; I get TIME; Sending HAK; YLM? (Translation: I love you; Thinking of you, I get tears in my eyes; Sending hugs and kisses. You love me?)

Will ILU last as long as Jeremiah’s “I have loved you with eternal love”? Can texts match the grace of elegant handwriting? Can an emoji smiley face with heart-shaped eyes become a substitute for love’s deepest wisdom? Might it be time to revive an old Jewish custom of requiring couples to write letters to each other before the wedding?

Rachel stood next to Kyle under the chuppah in the garden of her paternal grandparents’ home, as I read from her maternal grandfather’s 58-year-old letters written to his beloved: “Before I fell in love with you, my darling, I always thought I could live only for myself. However… I have found out how wonderful life can be when one lives because of another’s love.”

Sandy Eisenberg Sasso is the senior rabbi emerita of Congregation Beth-El Zedeck, in Indianapolis. Her books include “Jewish Stories of Love and Marriage: Folktales, Legends & Letters” (Rowman & Littlefield Publishers, 2015), which she co-wrote with Peninnah Schram.

Can Jeremiah’s Missive of Love Survive in the Age of Emojis?