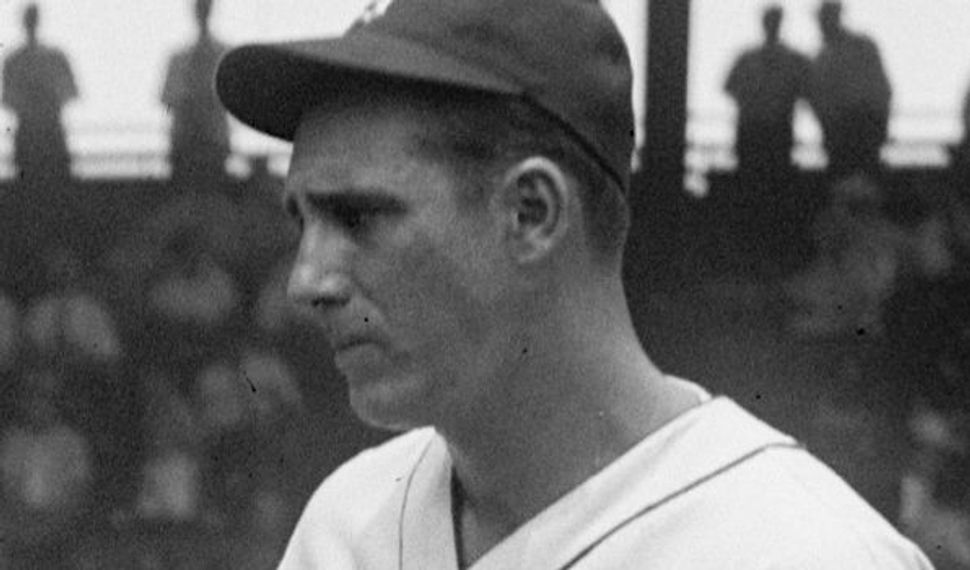 Hanks A Lot: Slugger Greenberg as seen in 1937. Image by Wikimedia Commons

Hall of Fame baseball player Hank Greenberg grew up in the shadow of Yankee Stadium yet never played for his hometown Yankees. Why not?

The Yankees did in fact pursue the young prospect. Paul Krichell, the scout famous for discovering Lou Gehrig, recognized another raw talent in Greenberg and figured — as the New York Giants’ manager John McGraw had famously articulated — that a Jewish star would be a great draw for the city’s large Jewish fan base. In 1920, nearly one third of New York’s population was Jewish.

McGraw thought he had found his coveted gate attraction with slugger Mose Solomon, ballyhooed as the “Rabbi of Swat,” but Solomon lasted only two games in 1923. Five years later, Andy Cohen had a bright rookie season but McGraw became disillusioned with the second baseman’s inconsistency and released him after the 1929 season. But when Hank Greenberg’s father asked the Giants’ manager if he would give his son a tryout, McGraw brushed him off, saying they had already seen Greenberg play in high school games and did not think he would ever amount to a ballplayer.

Krichell had also seen Greenberg play in high school. He had attended a James Monroe High game to watch a pitcher but became fixated on the talents and potential of the big kid playing first base. After Greenberg graduated from high school, Krichell saw him play a game for a semipro team against the House of David and slug three home runs. Krichell promptly offered the 18-year-old $1,000 to sign with the Yankees. Greenberg demurred. His parents wanted him to go to college.

The portly Krichell finagled a dinner invitation at the Greenberg home and upped his offer to an additional $500 for each year Greenberg was in college. That didn’t win over Hank’s parents, but they did like the Yankee scout and his wife enough to invite them back to dinner and even to a weekend party at their summer home in Atlantic Highlands, New Jersey.

Confident his schmoozing had won over the Greenbergs, Krichell brought Hank and his father to the Yankee offices at 42nd Street and 6th Avenue to meet with Yankee general manager Ed Barrow, who offered Hank $7,500 to sign with the team. The Greenbergs said they would think about it.

But the intelligent and street-smart 18-year-old was not so easily duped. He recognized that Gehrig still had a lot of good years left in him. Indeed, the 26-year-old Gehrig was already four years into his 2,130-consecutive game streak that would not end for another nine full seasons. As much as Greenberg liked the thought of himself in pinstripes, he did not want to have to wait in line behind Gehrig.

So he accepted an offer from the Tigers, who had a first baseman Greenberg thought he might more readily succeed, for $9,000. Krichell countered with $10,000, but that did not remove Gehrig from the equation, so Greenberg signed with Detroit, where he became a star from 1933-1946, missing the equivalent of four seasons from 1941-1945 while he served in the military.

With the Tigers, Greenberg laid the foundation for his eventual induction into the National Baseball Hall of Fame. He won two MVP Awards, led the league in home runs four times–including 1938 when he slugged 58, just two shy of Babe Ruth’s single season record–and in runs batted in four times, including 1937 when he knocked in 183, just one short of Gehrig’s single season American League record.

The Yankees remained interested in Greenberg, even more so after Gehrig’s retirement in early 1939. Trade rumors peppered the newspapers annually. Among other negotiations, the Yankees offered the Tigers $75,000 after the 1945 season, but Tiger owner Walter O. Briggs Sr., who didn’t need the money, got greedy and demanded the ‘45 American League batting champ Snuffy Stirnwiess in exchange for Greenberg, which killed the deal.

Greenberg would have liked to have played for the Bombers in front of his family, friends and dedicated fans like Moe Greengrass, who gave him bagels loaded with lox after Tiger games at Yankee Stadium. Greenberg did have the chance to wear pinstripes once, during a 1943 War Bond benefit game at the Polo Grounds. On leave from the Army Air Corps and without his Tigers’ uniform, he wore a borrowed Yankee uniform for the game.

On the first day of 1947–Greenberg’s 36th birthday–The Sporting News ran an article headlined, “Hank Hints He’d Like to End Career as Yankee.” Alongside the ill-sourced article, the paper ran a photo of Greenberg holding up a Yankee jersey. It made no mention of the fact it was taken nearly three years earlier at the War Bond game.

Incensed by what he publicly declared to be Greenberg’s lack of loyalty but privately motivated to dump Greenberg’s expensive salary (at $75,000 the highest in the major leagues), Briggs waived Greenberg out of the league. He played the final season of his career with the Pittsburgh Pirates.

Too bad that Greenberg never did have the chance to play for his hometown team. Had he, his name would still be mentioned today in conversations about the immortal Yankee greats: Ruth, Gehrig, DiMaggio, Berra and Greenberg.