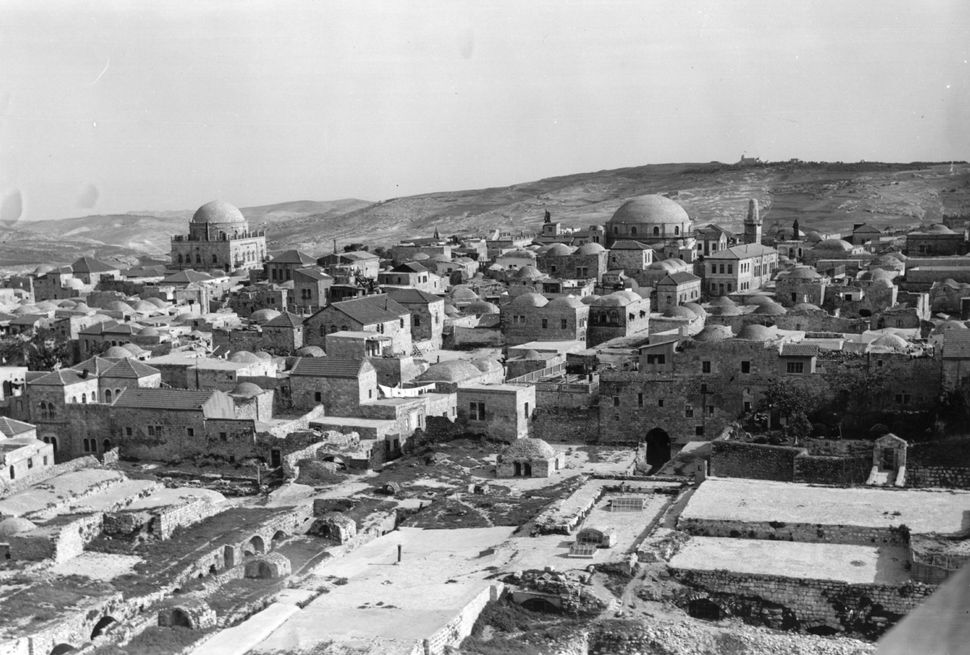 The Old City: Chanan Tigay’s “The Lost Book of Moses” concerns a search for a disputed manuscript. Image by Getty Images

Before Bedouins discovered the first Dead Sea Scrolls, in 1947 in a cave near the Dead Sea, another ancient manuscript briefly enraptured the archaeological community and promised to transform biblical scholarship.

The find in question was a fragmentary, nearly undecipherable early copy, perhaps the original, of the Book of Deuteronomy — the story of Moses. Its purveyor was an enigmatic and suspect vendor of antiquities, a Polish-born Jew and Anglican convert named Moses Wilhelm Shapira.

In offering this set of leather scrolls to the British Museum in 1883, Shapira asked for the enormous sum of 1 million pounds. The Jerusalem dealer previously had been implicated in an international pottery scam in which he claimed to have been duped. Since then, however, he had established a reputation as a purveyor of genuinely rare Hebrew manuscripts to the principal museums of his day.

In the case of the scrolls, Shapira’s hopes for both fame and a financial windfall were shattered when experts pronounced the scrolls a forgery. But were they? If so, was Shapira an unwitting victim or the culprit? And following his premature death, whatever became of the contested scrolls themselves?

Chanan Tigay, an accomplished investigative journalist and the son of a biblical scholar, sets out to answer these questions in “The Lost Book of Moses.” Tigay figures that if he can track down the scrolls, modern technology and scholarship should be able to establish definitively whether they are fraudulent — or not.

It is an intriguing premise for a book, but also seemingly a shot in the dark, given that the scrolls were likely incinerated or discarded many decades ago. The book’s narrative shifts back and forth between an account of Shapira’s life and of the biblical archaeology of his day and the story of Tigay’s own obsessive quest for the truth.

Tigay deserves credit for tenacity, creativity and overcoming jet lag. His travels take him to archives, attics, basements, museums, churches and other landmarks in Israel, Jordan, the Netherlands, Germany, France, England and even Australia. Not many people, not even many investigative journalists, would have devoted so much time and care (and money) to poring through dusty old registers, poking around cellars, and interrogating strangers around the world about a mostly forgotten 19th-century mystery.

But at times the search seems, as it must have been, exhausting. Not every reader will share Tigay’s passionate interest in the story’s blind alleys, including the many mistaken theories promulgated about the scrolls’ whereabouts in the years after Shapira’s violent death. Tigay happily loses himself in those byways, but his narrative could have benefited from more condensation and polish.

Still, some of the stories Tigay tells are intriguing. One is the saga of the so-called Moabite Stone, also known as the Mesha Stele, discovered by a Jerusalem-based Anglican missionary in 1868 and dating from ninth-century BCE. Its inscription detailed battles between Moabites and Israelites from the Moabite point of view, giving a boost to biblical archaeology. The struggle to possess (and decipher) the valuable stone, which led to its destruction and partial rescue, illustrates well the tensions of the times.

Another enjoyable set piece is Tigay’s account of his Australian journey. After reaching one dead end after another, Tigay receives a tantalizing email from a man named Matthew Hamilton, in Sydney. Hamilton claims to have found the actual purchaser of Shapira’s Deuteronomy — but then declines to reveal the name, or even to answer Tigay’s subsequent emails.

Tigay, naturally, determines to fly to Australia and “doorstep” Hamilton, the kind of ambush journalism perfected by “60 Minutes.” Showing up unannounced at Hamilton’s home (if he can even find the place) sounds like a terrible idea. But Tigay is fortunate enough to benefit from the kindness of strangers, to meet the elusive Hamilton and, eventually, to procure the clue he needs. How he does it is a nice, if sometimes comic, primer in investigative journalism.

Tigay doesn’t emerge from all this effort entirely empty-handed. Not only does he solve the mystery of the scrolls (no further spoilers here), but he also develops a deeper acquaintance with Shapira, who turns out to have been a remarkable character, if not an entirely admirable one: “vain, proud, intelligent, loving, deferential, industrious, entrepreneurial, greedy, fatherly, devious, chatty, maudlin, devout, sincere, insincere, grandiloquent, lucky, unlucky, hopeful, suicidal.” It is fair to say that Shapira — “a little bit Indiana Jones, a little Jay Gatsby” — left a complicated legacy, and that the indefatigable Tigay gives it its due.