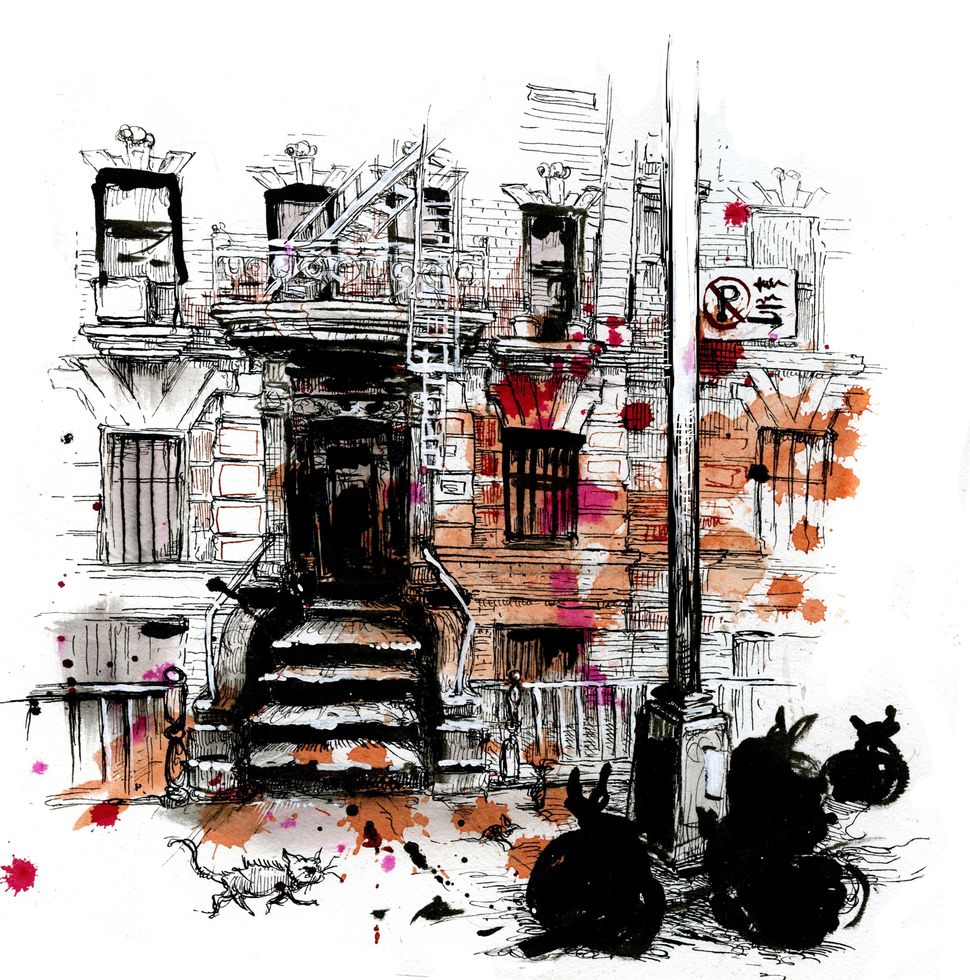 Image by Courtesy of Molly Crabapple

Walking into artist and author Molly Crabapple’s apartment in New York City’s Financial District, I briefly thought I’d wandered into a painting I once studied in art history: David Teniers’ “Archduke Leopold Wilhelm in His Gallery.” The painting’s nominal focus is a group of men, archduke included, but they almost disappear beneath the riot of paintings amassed in the room in which they stand. The walls are covered floor to ceiling; canvases lean up against the chairs. Although the room is dim, the art, dabbed with light colors, seems to produce its own brightness.

Crabapple’s apartment, which is also her art studio, has the same effect. It’s narrow, high ceilinged and plastered with art; it would be a good place to play hide and seek. Crabapple was running late returning from a morning appearance discussing President Obama’s proposal to close Guantanamo for TRT, Turkey’s national television and radio broadcaster, so her partner, Fred Harper, let me in. While I waited I marveled at the art on every surface — caricatures by Harper, spidery political sketches by Crabapple and large paintings by both — the modernity of which was at comic odds with the overall aesthetic of a crowded Renaissance museum, complemented by a hodgepodge of ornate old furniture.

When Crabapple arrived I was surprised. I’d been reading her recently released memoir, “Drawing Blood,” over the preceding few weeks and had found it to be a heady experience. Her writing is fast-paced and visceral; while reading the book, I’d had to take frequent breaks to step outside and clear my mind. Naively, I had half expected Crabapple to be the human embodiment of that swift, lush tone, but she wasn’t. Dressed almost entirely in gray, she stepped in with a smile, accepted a cup of coffee from Harper, spoke a few choice profanities regarding the morning’s conversation and sat down, tired but ready for business.

Crabapple, whose real name is Jennifer Caban, was born in Queens to a Jewish mother, who was the daughter of a Belarusian immigrant, and to a Puerto Rican father. She spent much of her childhood — which, she quickly reveals in her memoir, she hated — on Long Island. After intending from a young age to become an artist, she found herself frustrated by the art world’s inflexible system for establishing what qualified as good, so she dropped out of art school.

That didn’t mean she gave up. She took her art in another direction, inspired by the world of nude modeling and burlesque, which she’d stumbled into while trying to finance her education. Her first major breakthrough came when she was hired as the in-house artist for the Box, a hedonistic, circuslike, high-end nightclub that dominated Manhattan nightlife in the years before the crash of 2008. She worked steadily, but first made a significant impact during Occupy Wall Street, when her sketches both of and for the movement became one of its lasting symbols. Around the same time, she started to work as a journalist; she’s a contributing editor at Vice and has written for numerous other outlets.

She was given the pseudonym Crabapple, under which she’s publicly known, by an acquaintance who, during a teenage spring in Paris, confessed to her his desire to write a play. Inspired by her self-described “sour disposition,” he promised to include her as a character named Molly Crabapple. She didn’t adopt the name immediately, but she has stuck by it.

The name suits her, although not because of its sourness. It comes across, rather, as bold, a pseudonym that demands attention and refuses to play nice. It also fits Crabapple’s aesthetic: with pale skin; dark, searching eyes, and a high forehead, she looks a bit like the powerful heroine of some subculture fairy tale. (No damsels in distress here.) In the enclave where we spoke, sinking into worn velvet armchairs, she sat in front of a large-scale nude portrait of herself, done by Harper.

“I’m so burnt out,” she said with a laugh. It’s easy to see why. Over the past few months she’s been splitting her time among promoting “Drawing Blood,” working on her next book proposal, keeping up with her work as a journalist and artist, and furiously learning Arabic.

“I’ve been doing three to four hours a day,” she said, “and I can now read literature in it. I’m craving very nerdy conversations about Arabic poetry.”

In “Drawing Blood,” Crabapple, comes across as someone who is always working for the next thing, whatever it may be, and working hard. At 32 she’s been an artist, a journalist, the founder of the international subculture art movement Dr. Sketchy’s Anti-Art School, a nude model and a burlesque dancer. Between her art and her journalism, the latter of which she illustrates, she’s emerged as an advocate of social and economic justice movements around the globe. Her recent articles for Vice magazine include a look at war-torn Aleppo, a piece investigating the inhumane conditions of solitary confinement in Pennsylvania’s prisons, and observations regarding the architecture of occupation in the West Bank.

Combine a portfolio like that with Crabapple’s descriptions, in “Drawing Blood,” of her participation in the Occupy Wall Street movement — and her arrest at one of its rallies, an event that jump-started her journalistic career — and it would be easy to want to add “activist” to the laundry list of titles she already possesses.

She doesn’t want that. When I asked if she defined herself as an activist, she said, decisively, “no.”

“I feel like political engagement is something that people, if they’re so inclined, all people should do,” she said. “It’s not something that’s just for special, branded activists. It’s in part being a citizen.”

I was genuinely surprised to hear that response. We’d been speaking about Ferguson, Missouri, which I couldn’t resist asking about. I’d been living in St. Louis when Michael Brown was shot, and a year later I still found the protests and police violence of the ensuing fallout prominent in my mind. Crabapple had reported on it from afar, and I’d been desperate to hear her take on it.

I wasn’t sure why, until, thinking about our conversation after the interview, I realized that I had felt somewhat desperate for a validation of the idea that it’s possible to be an artist and an activist and not be swallowed whole by the endeavor. In “Drawing Blood,” it had seemed that Crabapple had done it all: She had created a successful career as an artist without following the rules prescribed by the mainstream art world, created an equally successful career as a journalist without any formal training, and situated herself at the center of OWS, one of the formative grassroots movements of this century. It was such a wildly alluring idea, that she could be all these things — that anyone could be all these things — and I wanted to know if it was true.

The thing is, the idea of citizenship that Crabapple proposes is actually kind of radical. In St. Louis in the fall of 2015, there was a feeling that the only way of supporting Brown’s family and community — and the young black men just like Brown, for whom being killed, because of the color of their skin, was an everyday risk — was to devote full attention to that task. But people had jobs and families, and tasks important to their hearts, like art, that, for many, made full attention infeasible.

In Crabapple’s mind, that’s okay. For her, a system that demands those who want to affect it give that endeavor their full heart and mind but doesn’t allow for degrees of meaningful, effective participation is a system that is not working.

“If you say the only way that you can be politically involved in the world is if you do this labor-intensive defined thing which has already been branded in a certain way, with certain aesthetics and certain cultural markers,” she said, “I don’t think that really serves anyone.”

That idea — that people should be free to operate outside of the way they’ve been branded, the idea that branding as an act imposes unnecessary, damaging boundaries — is essential to Crabapple. For instance, some would assume that the label of sex worker, which Crabapple occasionally assigns to herself, although she uses “professional naked girl” more frequently, would have prohibited her from entering the world of art and literature of which she’s now firmly a part. For her, one is essential for the other.

“I hate this idea that because a woman shows that she has a body underneath her clothing, she has no brain,” she said. “It’s the idea of saying, ‘Oh, you did this work, so you are stupid for the rest of your life, and you are minimal.”

“I’ve been doing these giant portraits of my friends, and then I’ve been letting them do whatever they want on top of them, like they could write on top of them, they could make marks, they could destroy it if they so wanted. It’s the idea of the muse speaking back directly onto the work itself and altering it.”

That impulse to speak back is part of what ties Crabapple, who comes from a family of “typical atheist commie New York Jews,” to Judaism. “The Jewish heritage that resonates the most with me,” she said, “is our history as rebels and rootless cosmopolitans. Our history as the first white Freedom Riders who were murdered. Our history as dissident intellectuals like Hannah Arendt. Our skepticism, our nonalignment, all the things that made authoritarians throughout the world hate us so much.”

Those same qualities are part of what makes Crabapple good at what she does. A skeptic by nature, she takes pains to understand both sides of an issue (or a canvas). She’s been an artist and a muse. She’s been hurt by unfair political systems, and she’s helped expose them. She’s not an impartial observer, far from it. But she approaches the subjects of her art and her pen with the gaze of a citizen: empathetic and understanding, but not self-sacrificial. With that balance comes a certain kind of openness.

“Look at this vast, beautiful, crazy, f—ked-up, gorgeous, horrifying world,” she said. “How could you not be inspired by it?”