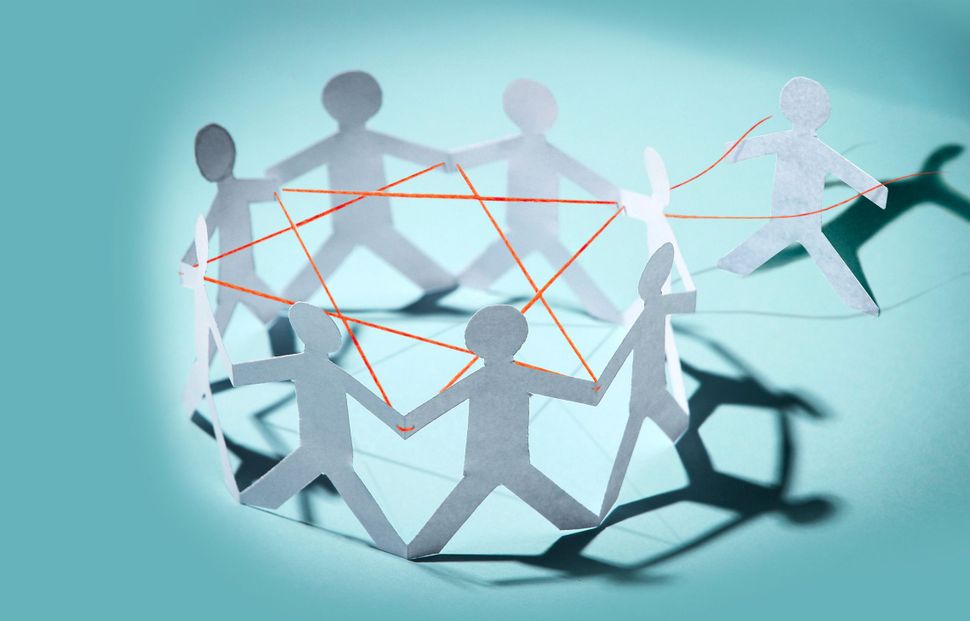 The first time I felt a pressing need to visit a synagogue after officially discarding religious observance was less than a year later, in September 2008, while passing through Nashville, Tennessee.

My friend Mordy and I had set out on a road trip several days earlier, in anticipation of the first High Holy Day season that we felt no obligation to acknowledge; we’d heard enough shofars blown to last us a lifetime, and had eaten all the apples and honey to ensure many sweet years. The evening before Rosh Hashanah, we drove into Nashville and checked into a Motel 6 before heading out to explore the town. When morning came, however, I awoke with an odd feeling. “I want to find a shul,” I said to Mordy. “Just for a few minutes.”

Mordy, a fellow ex-Hasid, shook his head in disbelief, while I looked up synagogues on my smartphone. “Our friends back home won’t believe this,” Mordy said, but he came along to the Chabad House I found anyway. While I took a prayer book and hummed some of the familiar chants to myself, Mordy sat in the back, crossed his legs and made a point of looking bored.

The next day, we were in Louisville, Kentucky, and I insisted on finding a shul again. Mordy, ever the sport, came along once again. Over the next few days, however, as we rounded our trip back to New York, I wondered what had driven me to shul. I thought it might’ve been just a hankering for the familiar prayers, the songs, the shofar blowing, but the truth was most likely something else. I was missing something more essential: connection. The feeling of belonging, to something.

In this month of Nisan we celebrate Passover, commemorating the Israelites’ enslavement in Egypt and their liberation. But I’ve long been struck by a parallel theme less remarked upon, the biblical references to the Egyptian period not as enslavement but as alienation. “Love the alien and do not oppress him,” the Bible tells us repeatedly, “for you were aliens in the land of Egypt.” A variant of this passage, in fact, appears in the Bible at least three dozen times.

This has always puzzled me. As we might put it today, alienation seems like a First World problem compared to slavery — kind of like remembering the subpar cuisine or the low thread count of the bedsheets; unpleasant, sure, but not so commemoration-worthy. Alienation, one might think, calls for a good therapist, not a monumental liberation event. Clearly, however, the Israelites retained a memory of alienation so deeply embedded in the national narrative that it became a trauma on par with slavery — so much so that we are enjoined to forever recognize the unique condition of the alienated among us.

Sociologists confirm that feeling alienated from society is not merely discomfiting, but a condition of crisis. Emile Durkheim, the pioneering French sociologist, wrote of anomie, a condition in which individuals feel alienated from the norms and values of the surrounding population, the feeling of rootlessness leading to depression and even suicide. Durkheim argued that this is even more common in modernity, with its swing toward secularism and away from the religious structures that contributed to cohesive societies in the past. Evolutionary psychologists can likely point to how this helped our ancestors survive. To me, there is the simple, observable fact that humans long for community, and one of the most apparent sources of community is in shared religious belief and practice.

Community, however, has long been in tension with individualism. I had been a great believer in the latter, absorbed the near-sacredness we’ve given it in our culture, and it was this that gave me the strength to make the most monumental change of my life: to move to the secular world from the religious world. Except, around the time of my Nashville visit, I was beginning to feel apprehensive, intuiting that this individualism also brought the rootlessness of modern, secular life. My shul visits on our road trip, I would recognize later, were feeble attempts to stave off what appeared to be that inevitable oncoming malaise: the sense of alienation from the rest of society.

During the years following, I grew further disillusioned, feeling the extraordinary isolation of modern life, astonished by the everyday indifference we see around us. We are nice people, kind to our family members, generous to our friends, but rarely do we ask a stranger on the subway how her day went. We hold the correct political views, and we donate to the Red Cross when calamity hits a far-off country; we do our part to protect the environment, speak passionately about social justice, and tsk tsk over a host of other global issues, but we barely know what our neighbors’ lives are like.

After that Rosh Hashanah road trip, I mostly stayed away from synagogues, but something still niggled. Around the summer of 2011, I wondered if I could attach to a religious community even if I had completely lost every discernible religious impulse, so I decided to explore my options. New York City feels like a bazaar of Jewish communities, making the task all the more intimidating, but I narrowed it down to a manageable few: a Conservative synagogue in Brooklyn, a Reconstructionist congregation in lower Manhattan, a Jewish Renewal shul on the Upper West side, and a handful of nondenominational communities and independent minyanim.

I spent six weeks going from shul to shul, mostly Friday nights and Shabbat mornings. I prayed, I chitchatted with congregants, shmoozed up the rabbi. I stayed for the Kiddush, and hung around during the potluck. I declined when there was dancing — so spirited a worshipper I was not — and remained seated for the Mourner’s Kaddish during the Sabbath before my father’s yahrzeit. I could not rise to exalt and sanctify a deity I did not believe in.

But man, I tried. The experience left me feeling more alienated than ever. The people were welcoming, the rabbis warm, the services spirited, but I could not identify with the earnestness of religious feeling I saw all around me. It felt like popping into a department store on a hot summer day just for the air conditioning; you can’t wander the aisles forever just for the cool climes. At some point, you either need to buy something or to move on. And I wasn’t buying — at least not the products offered.

Durkheim called modernity the “cult of the individual,” which seems apt. It also seems like an unsolvable paradox: Individualism allows us to step away from the shared values of the broader group, which removes us from community, and yet, we long for community still. Where is the balance? I often wonder. The closest I have come to community in recent years has been in fellowship with other ex-Haredim, although a group that defines itself by only a shared past — especially one of trauma or disaffection — is almost by definition transitory, a place through which, at least aspirationally, members are meant not to linger but to pass quickly.

You were aliens in the land of Egypt. Aliens. Strangers. Others. And then came the Exodus, liberation, redemption. But is that what I wanted? Liberation? From what?

In the end, I must admit, I chose my individualism, clinging to it so steadfastly, cherishing it to such a degree that if I were presented with a community that fit my criteria, I do not know that I would join. Perhaps, on some days, it pleases me that I haven’t found it. Yes, this is contradictory. I do not claim it is rational.

I did come close at one point. During those six weeks of summer in 2011, I showed up one evening at the Altshul community in Brooklyn’s Park Slope. An independent minyan, traditional and egalitarian, lay-led, with no hired rabbi or cantor, it had the informal quality of a Hasidic shtibl, and the progressive values of, well, Park Slope. My visit was on the eve of Tisha B’av, and the congregation sat on the floor in semi-darkness, speaking in hushed tones, as they prepared for the service before the reading of Eichah, the Book of Lamentations.

A young woman who looked to be in her 20s, wearing blue jeans and a short-sleeved T-shirt, rose to lead the prayers. This woman led the services with the casual ease that, until then, I had seen only in Orthodox men, where one might, on a typical weekday evening in a small synagogue, approach the leader’s lectern on a whim, requiring no specialized knowledge or formal training. Now, for the first time, I saw a woman fill that role, and I thought of my three daughters, who, still within the Hasidic community, are unlikely to ever experience that sort of full participation in Jewish religious life.

That experience had been uniquely moving, and I returned to Altshul a couple of weeks later on a Friday night, then another time on Shabbat morning. The congregation here skewed younger, and had something of a collegiate feel. “This is where the cool kids are,” I thought.

But this was to be the last of my synagogue visits.

When services were over on Shabbat morning, I chose to leave before the Kiddush. A couple walked in just as I headed out. The man, in a yarmulke, had a baby strapped against his chest. There had been a baby naming of a newborn girl during the Torah reading, and I assumed the family was there for the Kiddush.

It felt natural to greet them, but I hesitated for a moment, trying to decide between “Good Shabbos” and “Shabbat Shalom.” Before I could say anything, though, they passed, without acknowledging me, without seeing me, it appeared. I continued on down the stairs, through the foyer and out the door, only the security guard nodding as I passed.