At the corner of East Broadway and Canal, in the heart of Manhattan’s now chic Lower East Side, young men and women lined up on a recent Saturday night, waiting patiently to be seated at Mission Chinese Food, a downtown fixture decorated with a bright red awning and thick curtains.

With faces turned to the cool glow of their cell phones, no one glanced at the century-old, 10-story Beaux Arts building that loomed next door. No one noticed as its yellow lamplights flickered on, illuminating the edifice, and two words emblazoned higher up in block letters: “Forward Building.”

“They don’t have a table for two available for an hour,” one woman sighed to her friend.

Reliefs of Karl Marx and Friedrich Engels surveyed the scene passively, chiseled into the edifice of the Forward Building, once home to the premier Yiddish paper of the Jewish labor movement. Next to them was a Chinese church, “Jesus Saves” printed in a window. And farther down the block, at Wu’s Wonton King, ducks glistened in the window.

It was a New York City tableau: the engines of change paving over a past that never quite disappears. 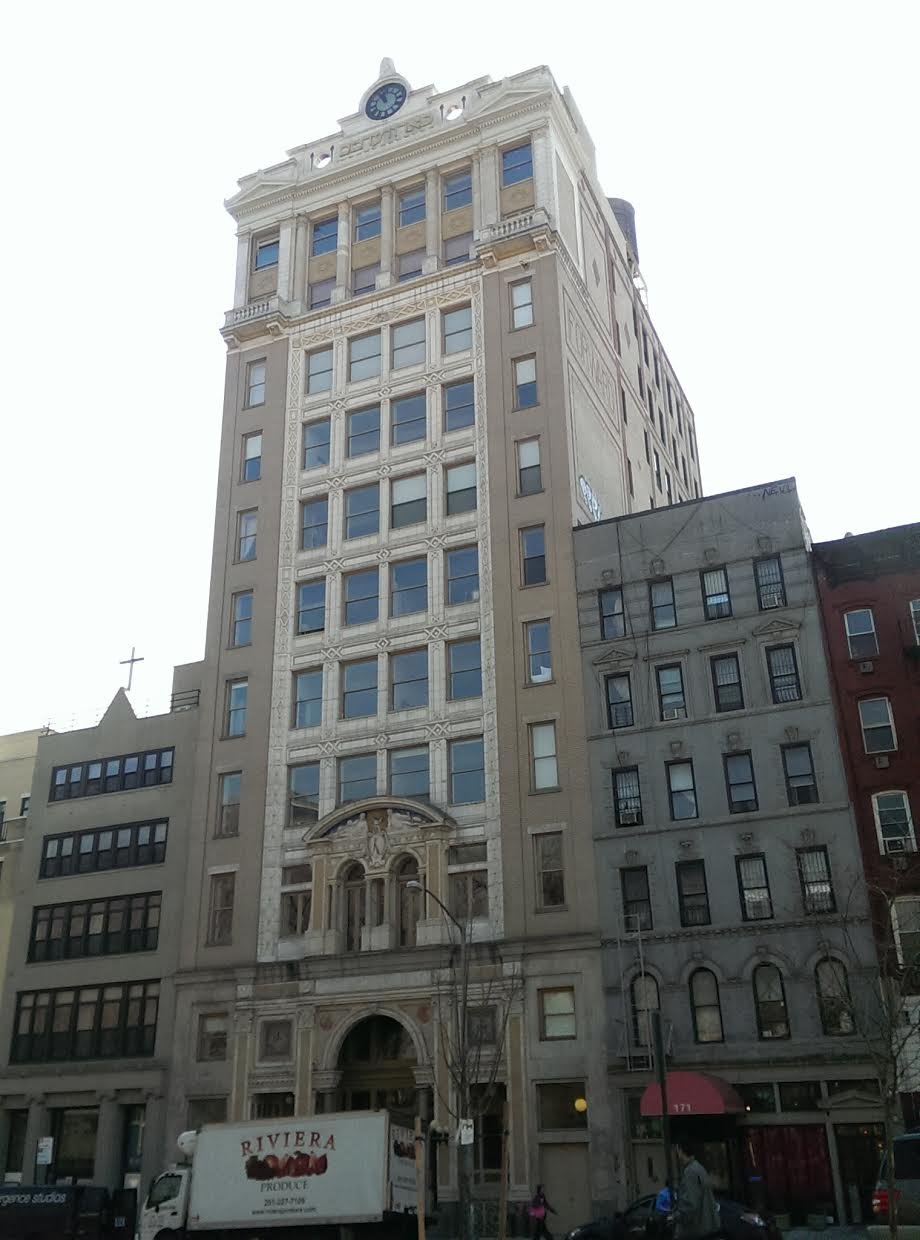 As the Forward enters its 120th year — in Jewish tradition, the maximum length a human can hope to live — its reporters and editors look out their windows from eighth-floor offices in a nondescript building just off Wall Street that is dwarfed by the headquarters of AIG, the insurance giant, and other financial behemoths of the sort the paper’s founders despised.

But in 1912, when it was constructed, it was the Forward Building, a house devoted to labor, that dominated the structures around it.

During its lifetime, the famous Lower East Side structure has housed influential socialist groups, an evangelical church, and now luxury condos whose recent tenants have included Tatum O’Neal, Spike Jonze and America Ferrera.

“It’s different out there,” said Manny Diaz, the building’s superintendent since 2007, motioning outside. Diaz even keeps old blueprints of the building and pulled up grainy photos on his phone, swiping through with his thumb and forefinger. “It’s different. But going in the Forward Building is like going back in time.”

For Abraham Cahan, the paper’s founding father, the establishment of the impressive Forward Building cemented his position as New York’s leading Jewish newspaperman.

But it took him years to get there.

Cahan was born into an Orthodox family in the Russia Empire, near the Lithuanian city of Vilna — today, Vilnius— in 1860. His grandfather was a rabbi, his father also a religious teacher. But very early in his life, Cahan came under the sway of European socialist thought, which was then surging through the shtetls of Eastern Europe.

After several years working with radical revolutionary groups seeking the czar’s overthrow, Cahan fled the Russian Empire, joining the first great wave of Eastern European Jewish immigrants who came to America with the approach of the 20th century. He was still in his 20s.

Settling in the Jewish slums of the Lower East Side, where living and work conditions were dismal, Cahan wanted to lift his people up. He himself rose quickly as a leading voice in the emerging Yiddish press.

But while Cahan remained grounded in socialist thought, he wasn’t as dogmatic or radical as some of his peers. He dreamed of reaching a broad audience — not simply publishing socialist propaganda. His vision of journalism included literature, entertainment and practical advice for new immigrants.

Cahan believed that a paper must “interest itself in the things that the masses are interested in when they aren’t preoccupied with the daily struggle for bread.”

In 1897, Cahan banded together with like-minded Jews to launch the Jewish Daily Forward.

The paper was popular, in part because of the range of topics it covered — from instructional notes on American table manners to poetry, from intermarriage to local political coverage — and as editor, Cahan grew its readership to almost 100,000 by 1910.

“Under your tenement roofs,” Cahan said, “is real life — the very stuff of which the greatest books are written. Let us read in this book together. Let us write more of it together.”

Cahan was a fixture in the neighborhood — well groomed, sporting a mustache — but he also fashioned himself into something of a journalistic celebrity abroad. In 1912, the year the Forward Building was inaugurated, he toured Europe, interviewing the French Jewish army officer Alfred Dreyfus, whose imprisonment in 1894 led to waves of anti-Semitism in France. He also met in Krakow with Vladimir Ilyich Lenin, then in exile from Russia. Five years later Lenin would lead the Bolshevik Revolution.

Meanwhile, at home, Cahan’s socialist paper made money. And the building’s completion marked its crowning achievement: the construction of a new headquarters, designed by George Beoum, a Paris- and Rome-educated architect, in the heart of what was then called “Yiddish Newspaper Row.”

Some looked askance at the new building. Was it too gaudy? “The socialist movement in New York will be buried under this 10-story capitalist building,” one critic named Henry Margoshes bemoaned.

With this building, he lamented, the paper had become “the most prominent cultural factor in American Jewish life…. The JDF is the center of a new religion for the Jewish crowd. It is like the Catholic Church for them, where they go after a hard day of toil, looking for consolation and promises for their future.” But Margoshes scolded, “The paper is also a circus… it provides them with fuel for their vulgar, primitive and rude instincts.”

But to others, the building was a symbol. It was the first skyscraper on the Lower East Side — though it would hardly fit that description now — rising above the surrounding tenements, small synagogues and sweatshops, protective symbol of the working class.

And they needed all the protection they could get. Just a year prior, a deadly fire had ripped through the Triangle ShirtWaist Company, further north in Manhattan, killing 146, mostly female Jewish and Italian workers. The catastrophe brought into sharp relief the perilous position of working-class immigrants.

The Forward Building became a headquarters for the working class’s response. The first conference of the Workers Liberty Defense Union was hosted there. And the Workmen’s Circle/Arbeter Ring, the Butchers’ Union Local 509, the Jewish Socialist Verband and the Naturalization Aid League all kept offices in the building.

It was such a political and neighborhood hub that on election days, a screen was unrolled on the side of the building and voting results were projected. Seward Park and the nearby streets thronged with crowds, jostling for a view. And the paper itself was at the center of the community they were reporting on and informing — editorial offices were on the upper floors, and printing presses were housed in the basement.

With its ornate facade, including pillars, engraved torches and a clock tower, the Forward Building was a sort of lighthouse, a beacon. The writer Alfred Kazin recalled how, as a young man, he would cross the Brooklyn Bridge and see “the electric sign of the Jewish Daily Forward, burning high over the tenements of the Lower East Side.”

Cahan reveled in it all.

Watching over the main entrance were four bas-relief busts of the patron saints of socialism. Next to Marx and Engels were two others: Ferdinand Lassalle, a Jewish-born founder of Germany’s labor movement, and a fourth socialist figure, whose identity remains a bit of a mystery even today; he is alternately identified as Wilhelm Liebknecht, Karl Liebknecht or August Bebel.

“Our old religious Jews here have their synagogues,” Cahan wrote in a 1912 editorial. “Where is the synagogue of our Jewish workers? Where is the temple of freedom, of equality, of brotherhood?”

Cahan answered himself: “The Forward Building will be the home of the Jewish socialist movement. The Forward building is the temple of the workers’ religion.”

Cahan’s dream of ethnic uplift and bringing Jewish immigrants into the mainstream may have been too successful. As more readers spoke English, demand for Yiddish newspapers took a dip.

And the Forward Building’s neighborhood changed, too. In the late 1960s, immigrants from southern China began streaming into New York.

In 1974, a Chinese-American family, the Laus, bought the Forward Building, and the Yiddish newspaper moved to midtown. The Lau family rented out the first floor to the evangelical Ling Liang Church; Chinese-language Bibles may have been printed there, too. (Marx, Engels and the other busts were covered with a sign in Chinese.)

By the late 1990s, the Lau family decided to convert the building to residential lofts. The demographics of the area were, again, shifting. Stephen Lau told The New York Times, “We hope to have people from SoHo or Wall Street, not just Asians.”

But the project never took off.

The building fell into disrepair. In 2004 another set of developers, Ronald Castellano and Christopher Hayes, stepped in. Similar renovations were taking place elsewhere on the Lower East Side; moneyed New Yorkers seemed to be rediscovering this historic neighborhood.

Hayes and Castellano completely restored its edifice. “Bring it back to exactly the way it was, that’s what we did,” Castellano said. The insides were gutted and remade into luxury condos.

During renovations, Castellano’s team tore open the floors and peeled back the walls. “We found old Yiddish typesets, even tobacco packs left by the original workers,” Castellano recalled. Where the Chinese church had been, they uncovered a faded Christian religious painting. “There were faded figures,” he said, “holding hands, standing there in a circle.”

According to broker Michael Bolla, selling the new units in the building (some of which sold for more than $3 million) was easy. There was plenty of demand.

“The Hollywood elite love the Lower East Side,” Bolla said in a recent interview. After advertisements went up around 2005 for the 30 luxury condos housed here, “we sold them immediately — within three months.”

On a recent afternoon some of those new tenants meandered home from work. Constance Spearnak, who was staying with family in the building, said they were just talking about the Forward’s history. One relative had asked her: “So, you live in that old socialist Jewish place now?”

One couple pushed their grandchild in a stroller on the sidewalk. “My parents used to read the paper,” the wife said. “She’s Jewish,” the husband said, gesturing to his wife. He, apparently, was not. “So is she,” the wife added, pointing to her granddaughter, who gurgled in the carriage.

“My ancestors didn’t immigrate from Eastern Europe and come through Ellis Island,” said Patrick Mizrahi, another tenant. “I came here on a plane. I’m a liberal Sephardic Jew from France. So maybe I don’t have all of that historic connection. But I still do feel some connection to this place, like when I see the Hebrew letters outside. Or when I look out the window and see the city. It makes me feel like a New Yorker.”