How My 10-Year-Old Daughter Solved Clinton vs. Sanders Dilemma 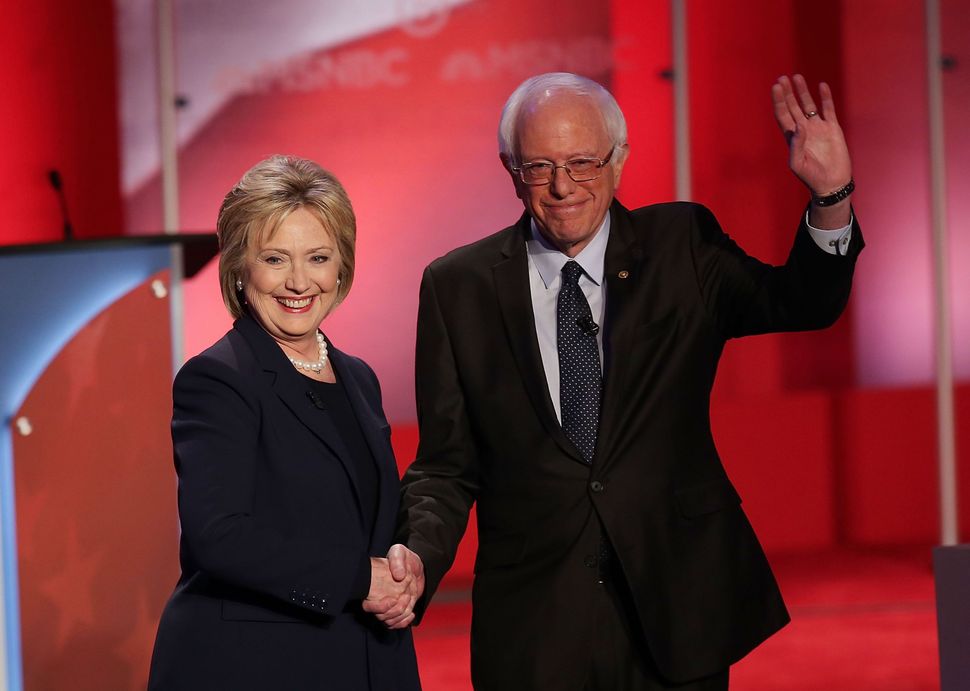 I had been on the fence about who I’d support in the Democratic primary and it sounded like a good pair of field trips — take my 5th grade daughter to one Bernie Sanders event and one Hillary Clinton event and, on the basis of her reactions, decide who I’d vote for. Whitney Houston may have said “I believe the children are our future,” but I figured I’d put that plan into action.

The two of us had been watching the debates together and, once Martin O’Malley dropped out of the race, the 10-year-old no longer had a rooting interest — she had found it unfair that the Maryland governor wasn’t getting equal screen time and therefore had thrown her support his way.

As for me, I’d been torn between two potentially transformational candidates — the first female president vs. the first Jewish president — and my thought process had been penduluming back and forth in this fashion:

Sanders’s general philosophy seem more aligned with my own.

Clinton seems far more likely to actually be able to accomplish the goals she sets out.

Isn’t saying that a vote for Clinton is a vote for cynicism a form of cynicism in and of itself?

As the father of two daughters, can I really not support a female candidate who has served as senator and secretary of state?

As the son of Jewish parents, how can I not support the first presidential candidate who sounds like one of my uncles asking me to pass him the potato kugel at the Passover seder?

Do I really want to listen to that uncle more than once a year at Passover seder?

What about Clinton’s triangulations on the minimum wage and the crime bill?

What about Sanders’s equivocations on gun control?

What about Clinton’s revisionist history gaffe about the Reagans opening up a national conversation about AIDS?

What about Sanders’s less-than-stellar performance in front of the New York Daily News editorial board?

What about all the friends I admire and respect who are either supporting or working for Senator Sanders?

What about all those other friends whose less-than-stellar histories with women make their support of Senator Sanders suspect?

My Facebook feed has seemed equally divided: Senator Sanders reminds them of either the most inspirational Poli-Sci professor they had in college or of the professor who played favorites and, on various drunken evenings, tried to hit on their girlfriends. FB reviews of Senator Clinton suggest those given to the clearly more committed prof who nevertheless scored low on RateMyProfessors.com for insisting on deadlines and downgrading for poor penmanship on in-school exams.

Could it be too late to write in Governor O’Malley? 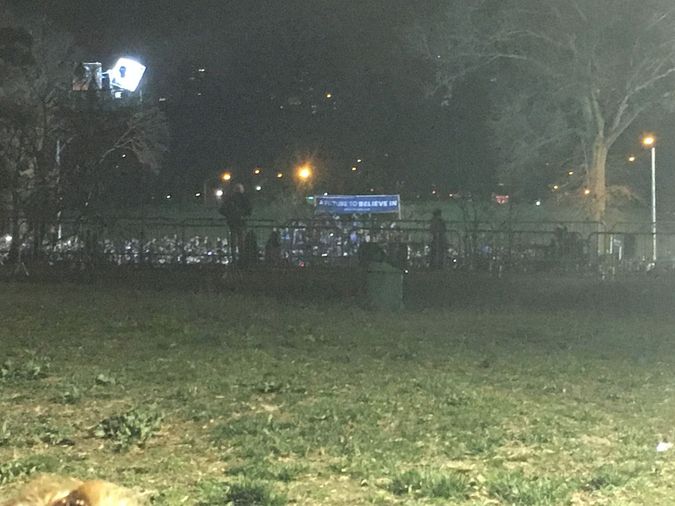 The View From the Cheap Seats: Senator Bernie Sanders is barely visible from this vantage point at St. Mary’s Park. Image by Adam Langer

The Sanders rally was held in late March in the Bronx in St. Mary’s Park. We joined the Bernie supporters who poured out of the 3rd Avenue and 149th Street subway stop, making a quick pit stop at Mickey D’s so that one of the 10-year-old’s closest pals could use the john. The atmosphere that evening was electric, energizing — I’ve been to political speeches before, but this didn’t feel like one. As we progressed along 148th Street — mingling with the crowds toting Bernie banners, sporting Bernie t-shirts and buttons — the closest analogy I could come up with was a rock show. I felt like I was in the parking lot of the Rosemont Horizon heading to see Springsteen.

And just as in a Springsteen show, even though we had made reservations, there was no way in hell we were getting in. One of the police officers at the park entrance estimated the crowd at 15,000. We made our way up a park path and stood behind metal barriers looking down at some tiny shape that turned out to be Rosario Dawson firing up the crowd. When Sanders delivered an impromptu early speech, speaking into a bullhorn on a nearby baseball diamond, the rock concert theme was still present — only I was thinking less of Springsteen at the Horizon than of The Who in Cincinnati circa 1979. We watched the crowds running en masse to catch a glimpse of their candidate and felt glad that we hadn’t gotten any closer.

Standing behind those barricades as the skies darkened, squinting at the spot-lit podium, I wondered if we’d come in vain, if we’d be able to hear anything at all. Rosario Dawson had been all but inaudible. Ditto for Spike Lee, which might have been just as well since after “Do the Right Thing” and “Malcolm X,” everything has been pretty much downhill.

And yet, the moment Sanders started speaking in his unmistakable would-someone-pass-me-the-smoked-fish cadence, every word was crystalline. And like any great band, he did all his greatest hits — he did “Break Up the Banks”; he did “Free College for Everyone”; and he did “Release the Goldman Sachs Transcripts.” The crowd watched, rapt — for, these were the songs they had come to hear.

“I know what it’s like to be poor,” Sanders shouted, and the woman standing next to me raised a fist. “Yeah,” she said. “It sucks!”

At the end of the evening as we walked back to the subway, the 10-year-old said she’d made up her mind.

“I think I want you to vote for Sanders,” she said.

But there was another event to attend. 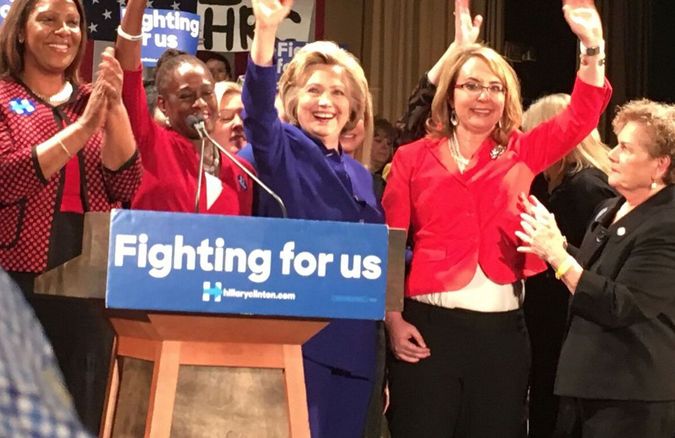 The View From the Third Row: Our view was better at the Clinton rally. Image by Adam Langer

On Monday, April 18, Secretary Clinton was scheduled to speak at the Hilton in midtown Manhattan. I pulled my daughter out of school early with the permission of her teacher and the school’s parents’ coordinator, though the latter said to me, “Give Hillary my regards, but I’m not a fan.”

We had made reservations online, but after we rode the escalators up to the third floor of the hotel, we saw two lines we needed to go through before we could get to the ballroom. Several hundred people were waiting in the registration line, after which they would have to stand in another line at the metal detectors. We played stupid and blew off the registration line and went straight to the detectors and no one seemed to care — bringing a kid to an event that’s purportedly about the future has its perks.

But if the Sanders event felt like a rock show, the atmosphere at the Clinton one felt more like a fundraiser for PBS. If there had been 15,000 fans at St. Mary’s Park, here there were barely one thousand, and they were significantly less diverse. The music playing chez Sanders was Paul Simon’s “America”; here, the P.A. blared Taylor Swift’s “Shake It Off” and Rachel Platten’s “Fight Song,” a song my 6-year-old once sang as, “This is my FART SONG!” No Rosario Dawson or Spike Lee here; the speakers who preceded Clinton were, for the most part, a series of lackluster opening acts who seemed chosen so as not to overshadow the headliner.

“Why would anyone ever get married in a hotel ballroom? That’s so boring,” my daughter opined.

We stood in the third row where we heard some uninspiring inspirational speeches from Manhattan Borough President Gale Brewer and Queens Borough President Melinda Katz. New York congresswoman Carolyn Maloney brought some needed fire to the proceedings, while New York first lady Chirlane McRay offered what seemed to be an unneeded and petty swipe at Bernie Sanders. The highlights belonged to former Arizona congresswoman Gabby Giffords and Planned Parenthood prez Cecile Richards, the latter of whom seems as though she could make a formidable national candidate herself.

The crowd pressed forward. A freelance photographer wearing a cheap blue sport coat and smelling of B.O. tried to muscle his way in front, at which point I turned into a Sean Penn character: “You don’t elbow my daughter,” I said. He backed off.

The optics of the event were noteworthy, a defiant antidote to the so-called “Bernie Bros” — all the speakers were women and so were all the people on the risers behind the podium. Some flack handed out a “I HEART HRC” sign for someone to hold.

“I think if I ask, I can get your daughter up there with them,” a guy standing next to me said. “It would be good to have someone young up there too.”

I admitted that would look good. “No, thanks,” I said.

But when Clinton entered in a cobalt blue pantsuit, her presence was disarming. If Sanders was an old timers’ act, playing all his hits for old and new generations of fans, Clinton recalled an M.O.R. performer who gets knocked for playing it safe but is actually a virtuosic musician. Did somebody say “Steely Dan?”

Despite her reputation, Clinton is surprisingly good at this sort of thing — nimble, personable, seemingly heartfelt in her speeches. Either she’s gotten a bad rap over the years or the fight with Sanders has made her a better candidate. Not enough for the schmucks in the front rows to stop taking selfies while she’s speaking, perhaps, but nevertheless a far more impressive candidate than I’d imagined.

So, I wondered as I watched Clinton speak, do I vote for the rock star who wrote six terrific great songs but never learned to play any other ones?

Or do I vote for the one who can play a whole catalog of tunes that are admittedly good but still make you want to reach for the radio dial?

Or do I realize that politics should be more about the substance than the performance?

On the way home, I asked my daughter who I should vote for. “I was for Sanders before, but now I’m not sure,” she said.

“Are you sure you’re not sure?”

“Yeah, it was interesting, but I don’t think I should have missed school for it.”

Unsatisfied, I pressed the point again at dinner, at which point my six-year-old interrupted with a question: “If Donald Trump wins, where will we move to?” she asked.

I said I didn’t know.

“Really? I thought he was just running to be president of New York.”

“Oh. Can we move to Finland then?”

“Some place with mountains.”

“What about Canada?” I asked.

So I guess it’s decided. Unfortunately, I’m not registered to vote in the Republican primary. And in the meantime, I still have to cast my vote.

How My 10-Year-Old Daughter Solved Clinton vs. Sanders Dilemma