Could Nathan the Wise Really Be the Second Greatest Jewish Character Ever? 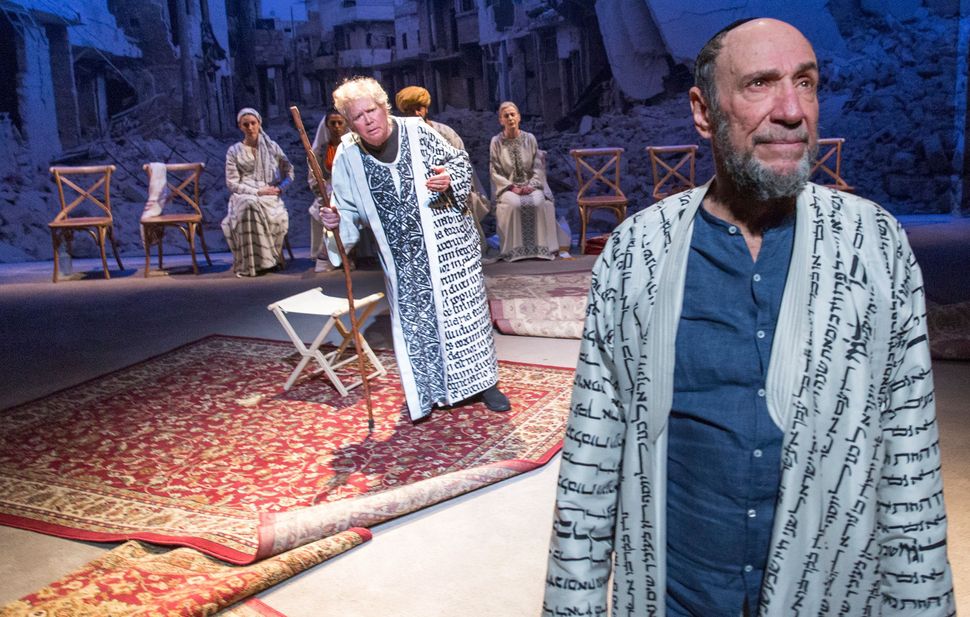 Abraham The Wise: F. Murray Abraham stars as the title character in “Nathan the Wise” at Classic Stage Company. Image by Richard Termine

When I studied in London, I frequently ran into street vendors selling black-and-white photographs of standard city scenes – a telephone booth, Tower Bridge, Westminster Abbey – in which a single detail, like a bus or street sign, would be colored red, a shock amongst the sedate. Sometimes the result was lovely, but more frequently it was garish, as if someone had scrawled the words “find this meaningful” above the selected item.

Classic Stage Company uses a similar trick in their new production of “Nathan the Wise,” Edward Kemp’s 2004 English translation of Gotthold Ephraim Lessing’s 1779 play. While the play is set in Jerusalem in 1192, Classic Stage gives it a modern twist by staging it against a backdrop image of bombed-out modern buildings in an undisclosed location, a picture made familiar by newscasts about the war-torn Middle East. Like those London photographs, certain details in the sepia-toned scene have been highlighted with pastel colors: a pile of rags, an inner wall left exposed by a blast.

It’s an unfortunate visual to accompany “Nathan the Wise.” Surely designed to elicit sympathy for the people who lived in those buildings, the ill-boding absence of whom is hinted at by the remaining, rotting traces of their lives, the image instead highlights one of the play’s greatest drawbacks: its overdone insistence that both its characters and audience find it meaningful.

The play is an examination of religious intolerance, its fatal effects, and its arbitrary foundations. The titular Nathan, a Jewish patriarch, spends the play navigating between the demands of the Muslim sultan Saladin – who challenges him to decide whether Judaism, Islam, or Christianity is the true religion, and explain why – and those of a Templar knight who falls rapidly in love with Nathan’s daughter Rachel and spends much of the rest of the play petulantly insisting that she be given to him. It ends with an antique sort of neatness, a reminder of its age, which some audiences might find jarring.

“We were concerned that the audience might feel cheated by the fable-like quality of the piece,” said the play’s director, Brian Kulick, “especially given the gravitas of what’s happening in the world right now.”

That fable-like quality, apparent from the play’s start, goes hand-in-hand with its heavy-handed attempts to create emotional resonance. “Nathan the Wise” begins with the cast arguing in Hebrew, German and Arabic, with no accompanying subtitles to clarify the argument’s content. The mystified audience’s thinking must turn, of course, to failures of communication. Is the scene an allusion to the tower of Babel? Probably. Does it suggest the audience should ponder the ways in which differences of expression separate us from one another? Yes. Does it do so effectively? Well, no.

A good fable is subtle, a sleight-of-hand that lets the audience experience a sense of discovery. That this scene lacks that gentle touch is a problem in the script, but in the preview I saw, it was reinforced by the production’s aesthetic. As the scene progressed the primary characters donned robes patterned with the symbols of their chosen religions; it was an unnecessary reminder that the differences between them were, ahem, symbolic.

This desire to guide the audience towards discovery speaks to the human instinct to search for something more, an instinct that, not coincidentally, is fundamental to spiritual pursuits. In that way, it’s a natural driving force for a text as interested in religion as “Nathan the Wise.” This version of the play, however – lacking any knowledge of German, I can’t speak to Lessing’s original – too-clearly signifies that the audience should find its literary and aesthetic details meaningful, thereby robbing them of all potential to be truly perceived as such.

This difficulty is best exemplified by the crux of the play, which is Nathan’s response to Saladin’s question about whether Islam, Christianity or Judaism is the true religion. (This section, called the parable of the ring, is the play’s most famous.) Nathan begins to answer Saladin by telling him a story about a father whose three children argue over which has inherited the father’s infinitely precious ring; the father has made two identical copies of it and given one ring to each child, leaving the true ring unknown. Saladin quickly grows frustrated with the story’s moralistic tenor – “I’m not a child, Jew,” he says – but by the story’s end, he’s accepted its message with an almost childlike awe.

Since this scene’s message is the play’s heart, its success is paramount, and that success relies on the audience mirroring Saladin’s wonder. Written as it is, its two participants are too much like caricatures to be effective emotional instructors; Nathan, who at other points exhibits some struggle in living up to his label as “wise,” is so uncomplicatedly good in this scene as to be almost alien, and Saladin’s acceptance of his point is framed with an equally unlikely naiveté. At this climactic moment, both the characters and their interaction require a dose of realism to draw the audience, naturally, into a state of agreement. That realism, unfortunately, is lacking.

That tendency to stray between tones is the primary frustration of “Nathan the Wise.” It has a great deal going for it: a religious conflict that, in its unfortunate continuation, gives the play an evergreen timeliness, enough comedy to entertain, enough seriousness to provoke thought, a love story, political machination, etc., etc. It just can’t quite decide what it wants to be, so it doesn’t commit to any of those elements enough to make them truly effective. It wavers between fable, drama, and farce, and in that unevenness, its message gets obscured.

This is, again, likely in part an issue of translation. Kulick encountered it for the first time as a college student, and thought he’d like to stage it, but, he said “there was just not a workable, actable English translation.” The play’s star, F. Murray Abraham of “Amadeus” fame, helped explain why: “the original is ungainly,” he said, “it’s huge.”

By their accounts, Kemp’s translation is the best available in English. But it’s taken the original down from four hours to a fast-paced two, and it’s easy to imagine that the need to cram in the plot’s many twists might have resulted in some loss of nuance. That holds true for Nathan’s character, as well. He’s billed by Classic Stage as, next to Shylock, “perhaps the greatest Jewish character in all of Western dramatic literature,” but I found him, as written, to be thin and formulaic: a good soul made great through suffering. Kulick was surprisingly upfront about this. While he did laud Nathan’s theatrical value – “the thing that makes the character so rich and rewarding is the depth of his humanity” – when I asked him what made Nathan the second-best of Jewish characters, Kulick’s first response was to laugh and say “there aren’t many.”

Given the uneven quality of Kemp’s “Nathan the Wise,” it seems its main value to a contemporary audience must be political. Kulick confirmed that idea. “The tragedy of tragedy is that it keeps happening,” he said. “‘Nathan the Wise’ is still a play that wants to be seen, because the problems that “Nathan the Wise” addresses haven’t quite gone away yet.”

It’s an astute observation, but undercut by the reality that politically, “Nathan the Wise” shows its age. Start with its characterizations of women. Rachel, Nathan’s daughter, makes her entrance as a damsel in distress; she spends the rest of the play being loved and fought over, her character never breaking through the constraints of vaguely charming naiveté. Her caretaker Daya, zealous about two things – Christianity and Rachel’s marital prospects – is similarly one-dimensional, and the sultan Saladin’s sister Sittah (say that five times fast), seems to have been written with the fallacious idea that allowing a female character to play chess and understand finance is indulgence enough to make her well-rounded.

The play occasionally gives off an uncomfortable colonial overtone, as well. That Hebrew and Arabic argument at the start of the play only stops when Nathan whistles and says, in English, “We have a story to tell.” (He proceeds to instruct the audience in the name of the play, the history of its writing, and its setting; this less than fully-fleshed-out meta-theatrical concept of the bickering troupe united by the pursuit of a message of peace never resurfaces.). The bickerers, cowed, proceed to meekly don their robes, adopt English as their shared language, and perform the play.

It’s difficult not to flinch at that progression. The play derives its significance from perceived parallels between religious intolerance in the modern day, the 1700s, and the 1100s; the tone-deafness of positioning an English-speaking patriarch as the wise man amongst the babblers – ignoring the troubling legacies of the British Mandate – is hard to write off harmless. It’s worth noting that the script also includes protests against colonialism, specifically in Nathan and Rachel’s remonstrations of Daya for her relentlessly Euro-centric opinions. Still, it’s an initial political misstep that might well alienate audiences.

Most importantly, the entire thing is too tidy. For anyone interested in the current state of religious conflict in and beyond Israel, the play’s central idea – that all religions, and their followers, are equal, and that there is much to be lost from animosity between them – is too obvious, and too obviously insufficient, to be fresh or inspirational.

For me, Kulick’s fears about the potential ramifications of the fable-like quality of “Nathan the Wise” were realized. I felt the political message of “Nathan the Wise” was interchangeable with that of “Why Can’t We Be Friends,” a song I used to reject a potential suitor in the seventh grade. (Sorry, Colin.) The idea that we could solve our problems if we all just mastered our feelings and got along is perpetually appealing, and far from irrelevant, but it’s been worn thin from lack of practical wisdom. After thousands of years of religious persecution between groups, one gets the feeling that if such a sweetly compelling solution had more than theoretical value it should, perhaps, have worked already.

When I asked Abraham the same question as I did Kulick – what fears he had surrounding the production – he told me he was worried “that people will scoff at the message, considering what’s happening everywhere.”

I would counter his fear with one of my own: that people will consider the message of “Nathan the Wise” sufficient, and let the harder truths of contemporary religious intolerance go, regrettably, unexamined.

Could Nathan the Wise Really Be the Second Greatest Jewish Character Ever?