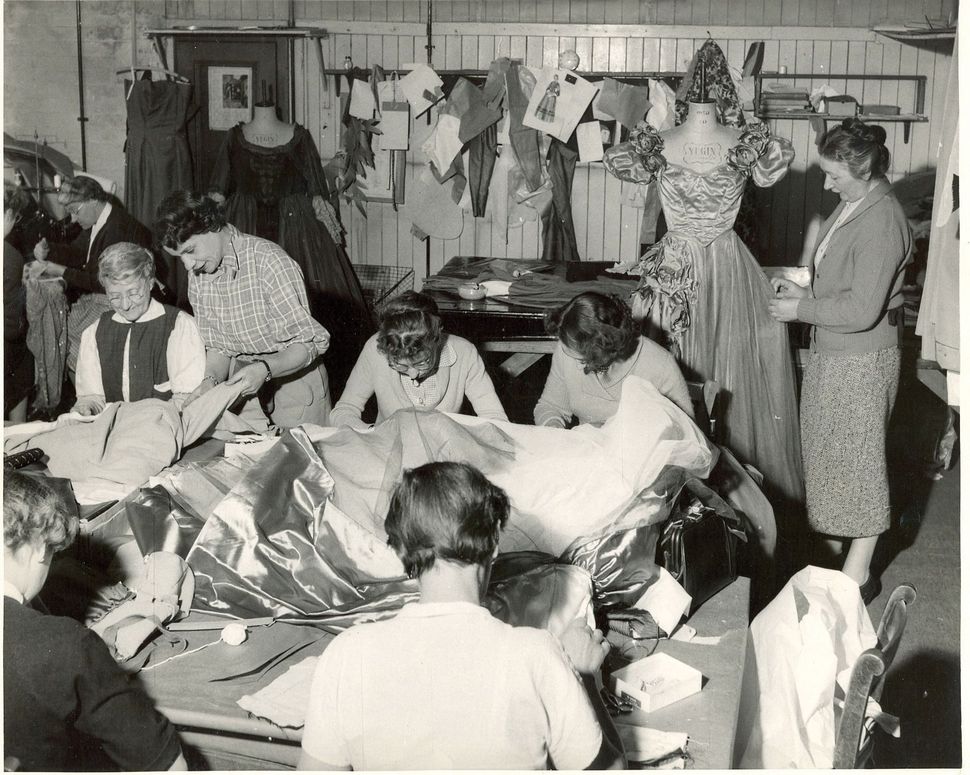 Image by Courtesy of Angels Costumes

For the first time in its more than 175-year history, the Jewish owned, London based costumier, Angels Costumes, received an official honor when it was awarded the BAFTA award for Outstanding British Contribution to Cinema in February.

Founded in 1840, the family-run company is the world’s largest supplier of costumes to the stage and screen. For seven generations Angels has dressed the casts of countless theatrical, film and television productions, but “as behind the scenes people, our contribution is not normally recognized, so receiving such recognition is simply wonderful,” said Chairman Tim Angel OBE, in his BAFTA acceptance speech.

A costume house that is as old as cinema itself, Angels first supplied costumes to the film industry in 1913. It has since worked on 37 films that have won Oscars for best costume, beginning with Lawrence Olivier’s “Hamlet” in 1948 and going on to “Star Wars,” “Doctor Zhivago,” “The Great Gatsby” (1974 and 2014) and “The Grand Budapest Hotel.” This year it has provided costumes to several BAFTA and Oscar nominees, including “Cinderella,” “The Danish Girl,” and “Bridge of Spies.”

Despite its rather grim location on an industrial estate in north-west London, stepping inside Angels’ purpose-built head office and cavernous 160,000-square-foot storage facility gives visitors an alternative history of the theater, film and television industries.

The building’s ground floor walls are adorned with dozens of black and white headshots of actors (some signed) that hang next to letters from clients and movie memorabilia. Mannequins exhibiting examples of costumes are strewn about — many of them are instantly recognizable outfits, such as one worn by Harrison Ford in “Indiana Jones” or Peter O’Toole’s cream and white cape-like dress in “Lawrence of Arabia.”

Ordinarily, all these exhibits would be behind glass in a museum but instead they are studied as reference material for visiting actors and designers. Angels never throws an item away, believing that there may always be another use for it.

“If you cut it, you kill it,” explains creative director Jeremy Angel — Tim’s youngest son — as he takes me on a brief tour of the building. “We need to use material again and again.” Special fabrics such as fine silk and heavy cloth can be difficult to source but authenticity is paramount — technological advances such as high-definition have made this even more important, he says.

All tailoring is made by hand using traditional methods. “The way we make now is exactly the same way as how we made 175 years ago,” Tim Angel says, sitting in his office, his two dogs playing happily at his feet.

A men’s suit may take five days to make, a women’s outfit longer. In the tailoring and ladies making (dressmaking) rooms, dummies model the drape and fall of fabric — the female mannequins are noticeably padded, reflecting women’s body shapes. Men’s clothes, regardless of size, tend to hang in a certain way, Jeremy Angel says when we walk into the alteration room.

History and tradition even extend to measurement. A large brown ledger sits on a wooden table in the entrance to the men’s tailoring room. Noted in pencil on its aging pages are the measurements for many male actors, including Noel Coward.

Angels’ costume collection is made up of over one million pieces of clothing on over eight miles of hanging rails. The variety of stock inside this vast, air-controlled warehouse is breathtaking. Military uniforms hang in chronological order. There are ecclesiastical robes, sci-fi outfits, gowns and hippy clothes. The military department has rooms stuffed with badges, buttons, buckles, epaulettes and armor. There is a room full of ladies underwear, with white and cream bloomers hanging from its shelves. Clothing rails are categorized according to gender, color and historical era, such as Medieval, Tudor or Edwardian.

The preservation of these costumes is vital and the site is fumigated every two to three weeks. Remarkably, there is no database for them. Angels’ 120 staff members rely on memory to source and keep track of items, although a bar code system is in the process of being developed.

In addition to providing outfits, jewelry and accessories to the entertainment industry, Angels has supplied fancy dress costumes to the public since the 1990s. These can be acquired for purchase or hire from its main warehouse, online, or from its four-story central London store on Shaftesbury Avenue — the site of Morris Angel’s original shop. Last year, the company earned nearly £2 million from the Halloween fancy dress market alone.

Angels was originally established by a German immigrant tailor, Daniel Angel, who came to the U.K. in the early 19th century. He lived in Covent Garden’s Seven Dials, an area in central London that was then a notorious slum. He sewed second hand clothes for a living but struggled to provide for his wife and five children. To make ends meet, he took a job as a cemetery keeper at the burial grounds of a wealthy community. “When the men died, he would tell the wives that he could get rid of their husband’s clothes,” Tim Angel says. He then gave them to his son, Morris, who began selling them.

“We were in the heart of theater-land and actors had to supply their own clothes. They used to buy them, but one day someone said can I borrow something for the evening. Borrow doesn’t exist in our vocabulary — the word is hire — and that’s how the hire business started,” Tim Angel says.

The business thrived as the family seized opportunities, adapting to the changes that were occurring around them. The Angels provided a tailoring service for officers in the Diplomatic Corps during World War I and they then moved from theater to light entertainment, from cinema to television — even supplying costumes for the radio when it started. “When you did a radio show in England all the newsreaders had to wear evening dress,” Tim Angel said.

Every generation of Angels has seen the entertainment industry change. With Netflix and Amazon now influencing TV, the digital age has created new opportunities. “People aren’t necessarily going to watch TV and films on a big screen in their house. It’s going to be about this,” Angel senior says, pointing to a mobile phone.

He believes that the longevity of his family business can be attributed to passion, luck and location. “Little did [Daniel Angel] know to go to that [central London] area.” In the early 1930s there was a bitter feud. “This happens in every family business — in the third generation. But the roots were very strong and we survived that.”

Tim Angel has led the company since 1986. He began working for his father when he was 17, and had an exceptionally close relationship with him.“We were more like brothers than dad and son,” he says. However, there were inevitable challenges to working with family. “Everyone thinks that it’s very easy going into a family business but it isn’t. You want your kids — at least I do — to do really well. I want them to do better than other people, they can’t make the same mistakes,” he says.

Tim’s oldest son, Daniel, is Head of Costume and his daughter, Emma, is Director of Fancy Dress. “The problem is that because they’re my kids I’m bound to talk to them in a certain way because I’m their dad. At times, I’m probably different towards them to how I am with some of the other people here. But that’s because they are my children first and we work together second.”

Jeremy Angel admits to being very scared before he started working at Angels seven years ago. It had never been his intention to join the family business — he had gone to university then worked in the film industry as an assistant director, but he joined Angels after building its website. “We’re a close family, it’s lovely,” he says, “but the hardest thing is when I’m sitting in meetings [with my father], I have to remember that this isn’t my dad, this is my boss.”

Tim Angel is considering the question of succession, but at 65 he still loves what he does and is not ready to stop working yet. He admits that he finds it difficult to identify what he thinks Angels’ greatest achievement has been under his chairmanship, but Jeremy is clear. “Angels is known the world over — there’s no-one who competes. I say this because he” — looking at his father — “doesn’t normally hear [it]… Whoever fills his shoes has two of the biggest shoes to fill. It’s a massive amount of pressure on us.”

Eventually Tim Angel concedes the point. “I think I’ve made — in my head — the perfect costume house in the world but that doesn’t mean it can’t be improved on.” Unintentionally, he has raised the bar even higher for the next generation of Angels.

Anne Joseph is a freelance writer based in the United Kingdom.