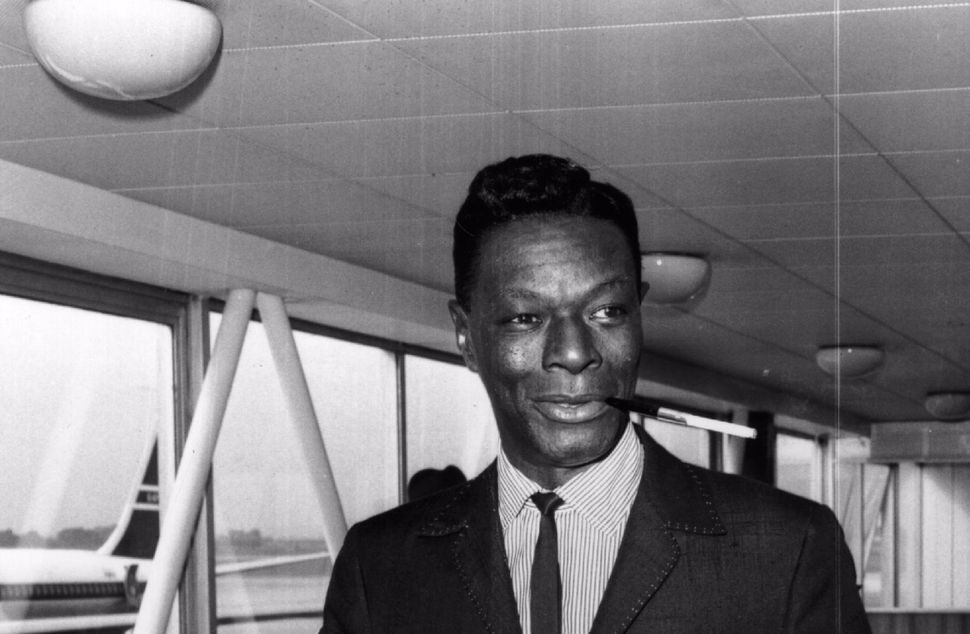 In 1947, a magnificent jazz pianist and singer named Nat King Cole recorded a breakthrough number titled “Nature Boy.” In a world of late-era swing, novelty songs, and syrupy ballads, “Nature Boy” stood out because of mysterious, evocative lyrics but also because of its brooding, urgent melody. Few listeners were aware of the Jewish resonances of “Nature Boy,” including perhaps its putative composer, Eden Ahbez.

Eden Ahbez was born in New York and given the name George Alexander Aberle. He lived with his family in the Brownsville section of Brooklyn until he was sent to the Brooklyn Hebrew Orphan Asylum. From there, he went by orphan train to Kansas, where he spent his early adolescence living with a Protestant couple.

As an adult, George drifted to Los Angeles, where he fell under the influence of German immigrants who promoted back-to-nature philosophies that were prototypes for the hippie culture that came 20 years later. He changed his name to eden ahbez, insisting on the lower-case letters and the pronunciation of his last name as “ah-bee”. Rumor had it that he lived outdoors under the first L in the Hollywood sign.

Backstage at the Lincoln Theater in Los Angeles, Eden handed his composition to Nat King Cole’s valet, who gave it to the master musician. Cole liked it immediately and once he got permission from Eden, he recorded the song. It was a breakthrough hit, and Eden was quite willing to come down from the mountains to promote the song, along with his offbeat philosophy. He gave press interviews and appeared on television, always retaining his nature boy persona even in the face of the buttoned-up conformity of the post-war years. It’s quite the contrast to see him posed in his Jesus hairstyle, oversized coat and beach footgear, standing with the stylish Nat King Cole in an elegant theater.

But, like Eden, two other men used the musical motif of “Nature Boy.” One, Herman Yablokoff, was indisputably Jewish. The other was Antonin Dvořák, the Czech national musician. Dvořák was first, with his Piano Quintet No. 2 in A, Op. 81 (1887)](https://www.youtube.com/watch?v=9-r4fmPeJuo)

The second movement, “Dumka,” begins with the same melody as the musical couplet that forms the A section of “Nature Boy”. Dvořák was inspired to use folk music motifs as part of the movement for nationalism in music that was popular in the latter part of the nineteenth century. A dumka is an elegiac Slavic musical form that was found in folk ballads. Traditional Yiddish music resounds with these Slavic elements, and musicological evidence suggests that there was abundant cross-fertilization between Jewish and non-Jewish musicians in Eastern Europe.

In total contrast, Herman Yablokoff was a successful Yiddish theater personality from Grodno who wrote the Yiddish stage hit Papirosn, the source for the eponymous song that may also originate in folk music. Another song from the same musical was “Shvayg Mayn Harts” — “Be Still My Heart” — which has the same haunting three-note motif as “Nature Boy” and Dvořák’s dumka. Once “Nature Boy” became a hit, Herman Yablokoff sued Ahbez for plagiarism. Eden Ahbez denied ever hearing “Shvayg Mayn Harts” and he told Yablokoff that he heard the tune from angels. Nonetheless, he settled the suit by paying Yablokoff $25,000.

Author Brian Chidester has been researching the life of Eden Ahbez for many years. According to him, Eden Ahbez claimed to be Jewish by birth. Census records show that his parents were born in Germany and England, and that they immigrated under the decidedly un-Jewish name of Aberle. Why and how did they end up in the Yiddish-speaking enclave of Brownsville? Why did they put four of their children in the Brooklyn Hebrew Orphan Asylum? And when in his unsettled life did Eden acquire the skills to compose a song with Eastern European cadences and the flavor of Jewish melancholy?

Chidester points out that by the time Papirosn was staged, Eden was 27 years old, and no one knows for sure where he was living at that time. He definitely lived in Kansas City at a time when lively jazz was being played there, but he might have gone back to New York as well. Wherever he was, he probably had access to radio, the ubiquitous musical medium of the era. Could he have heard Dvořák’s piano piece on the radio? Chidester also notes that the play Papirosn was broadcast on Yiddish radio, another place for Eden to hear the melody of “Shvayg Mayn Harts”. Of course, this assumes that Eden was listening to the music and ignoring the Yiddish content of the broadcast, or that he learned some Yiddish during his time in the orphan asylum. There is no evidence that “Shvayg Mayn Harts” was ever recorded.

For that matter, where did Herman Yablokoff hear the melody? He might have heard it in America or in Europe, either in Dvořák’s setting or perhaps as a folksong he picked up in his travels in Europe as a member of the Kovno Yiddish theater troupe. Like Eden, he probably was not aware that he was using a motif he had heard, rather than creating a new one. Music history is filled with unconscious quotes, contrefacts, and borrowings of tunes and riffs.

“Nature Boy” stood the test of time. It attracted R&B greats like Etta Jones and James Brown, whose version of the song is eerie and startling.

But it is Nat King Cole who kept and built upon the Yiddish tam of the piece in an orchestral arrangement, probably done by Les Baxter or Frank deVol. Though laden with strings, the recording features evocative use of flute, harp, and oboe, with one or two Yiddish violin licks.

Even better is the trio setting from Nat King Cole’s television show. In this video, the guitarist demonstrates a thorough understanding of the Yiddish undertones of the song.

Could another African-American artist give the same Yiddish feeling to the piece? Sarah Vaughan recorded the song in 1948. Because the American Federation of Musicians had called a strike, singers like Vaughan were recording a cappella, with choral backup. Her version is a work of art, though the recording is, unfortunately, substandard. The choral part is spare and beautiful, but has no noticeable Jewish flavor, nor any real African-American sensibility. It is mostly a female counterpart to Frank Sinatra’s version, which is from the same time period but has a fuller choral part and better recording quality. Perhaps the lack of instrumentation precluded Yiddish licks such as the arpeggio flourish that Irving Ashby played on his guitar. John Coltrane went wild with those flourishes in his version:, but Miles Davis eschewed them in his typically bright, understated manner, for a rendition) that is closer to Nat King Cole’s singing.

Nat King Cole’s success made the song a standard just as modern jazz was coming into its own. The murky history of the song, its possible Jewish origins, its eccentric composer — all these are elements in the complex relationship between Jewish and African-American music.

Beth Dwoskin is a retired librarian, a writer, a singer, and a lover of jazz and blues. She studies Jewish women, Jewish music, and Yiddish.