How a Rabbi’s Granddaughter Became the Host of Democracy Now! 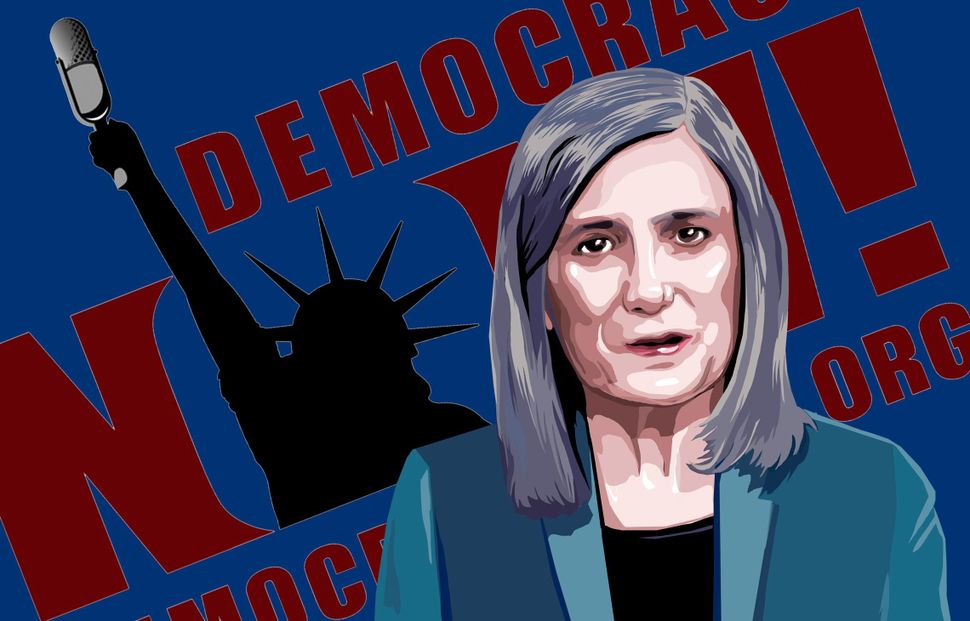 Amy Goodman went viral the day before I interviewed her. It happened after she visited the CNN show “Reliable Sources” to talk about the media’s role in Donald Trump’s ascent. During her conversation with the show’s host, Brian Stelter, Goodman, the longtime co-anchor of the daily news broadcast “Democracy Now!” pointed out how, on a recent five-state primary election day, CNN showed footage of an empty Trump-event stage instead of a live speech from another candidate.

A few moments later, she quoted Noam Chomsky’s dictum that “the media manufactures consent,” and cited a media-watchdog organization statistic that Trump has gotten 23 times the coverage of Sanders during the current presidential campaign.

Within 24 hours, Goodman was alongside Justin Bieber and Serena Williams on Facebook’s “Trending” dashboard, with the description “Host of ‘Democracy Now!’ Criticizes Media Coverage of Presidential Candidates on CNN.”

The moment was vintage Goodman. On one level, it was an analysis from a reporter who frequently assures viewers that “Democracy Now!” is free of the advertising-dollar influence of weapons manufacturers, oil companies and Big Pharma. (The show is not-for-profit and is funded by viewer donations and various foundations and grants.) On another level, Goodman, who has reported on massacres in East Timor and been arrested covering anti-war protests at the White House, was bluntly criticizing CNN while appearing as a guest on the network. And then ˇthere was the credibility that got her invited in the first place. In 2011, Stelter wrote in The New York Times that “Democracy Now!” “distinguishes itself by documenting social movements, struggles for justice and the effects of American foreign policy, along with the rest of the day’s developments.”

The viral CNN moment was well timed. It came a month after “Democracy Now!” marked its 20th anniversary — two decades in which the show has grown remarkably. What started as a radio broadcast in the cramped garret of a converted lower-Manhattan fire station is now a high-tech, multimedia operation occupying an entire floor of a building a few miles uptown, and employing a staff of over 20. Today, “Democracy Now!” streams live online from 8 a.m. to 9 a.m. and is beamed to more than 1,400 radio and TV channels.

Those 20 years have also seen Goodman become a kind of cultural icon: a razor-sharp reporter who writes best-selling books, delivers college commencement speeches, and received a lifetime achievement award from Harvard University’s Nieman Foundation for Journalism. When she set out on a cross-country speaking tour to celebrate that 20th anniversary, her first stop was in upstate New York, where she was inducted into the I.F. Stone Hall of Fame at Ithaca College’s Park Center for Independent Media.

Goodman, who is 59, is no stranger to the honor’s namesake. In 2009, she marked the 20th anniversary of Stone’s death with a segment on the journalist born Isidor Feinstein Stone in Philadelphia, in 1907. She introduced that “Democracy Now!” conversation with Stone’s biographer by saying,: “He was the premier investigative reporter of the 20th century, a self-described radical journalist… [who] scooped reporters right and left. As the FBI tracked him, he tracked down the story.”

Jeff Cohen, founding director of Ithaca’s Park Center, describes Goodman and Stone as kindred reporters from different generations. “For roughly 20 years during some dark times, Izzy Stone’s independent newsletter was the most trusted journalistic watchdog for many progressive Americans on government deception, political repression, war and peace,” he told the Forward via email. “For the last 20 years, Amy Goodman’s broadcast has filled that role of most trusted watchdog — except that Amy isdaily and she reaches far more people than Izzy did.”

“Democracy Now!” premiered as a radio show February 19, 1996, during the early stages of the presidential race involving Bill Clinton, Bob Dole and Ross Perot. Goodman describes the show’s philosophy in the introduction to her new book, “Democracy Now!: Twenty Years Covering the Movements Changing America,” which she co-wrote with her brother, David Goodman (a journalist based in Vermont), and her longtime collaborator, Denis Moynihan.

“Our hope was that the issues in the presidential race were important enough and listeners cared enough that they would tune in to daily coverage that brought them the voices and ideas not normally heard in the corporate media,” she writes. “That’s how we started: giving a voice to the grassroots.”

“I believe the media can be the greatest force for peace on earth,” Goodman writes at another point. “Instead, all too often, from the Vietnam War to Iraq, Afghanistan, Yemen, and Syria, it is wielded as a weapon of war. That has to be challenged.” Discussing the 2008 Republican National Convention where she was arrested while demanding the release of “Democracy Now!” producers who had been arrested while filming protesters, she adds, “We have to get out onto the streets where the uninvited guests are — sometimes thousands of them. These protesters have something important to say as well. Democracy is a messy thing and it’s our job to capture it all.”

Later, she writes that the show’s core mission is to “go to where the silence is and give voice to the movements that are shaping our world.”

The book is an encyclopedia of modern leftist movements, tracking activism related to climate change; capital punishment; rights of lesbian, gay, bisexual and transgender people; government surveillance, mass incarceration, immigration reform, police-related violence and Occupy Wall Street. Frequently, Goodman reports live from the scene of the events, like, say, the June 2015 mass shooting in Charleston, South Carolina, and the subsequent push to remove the Confederate flag from state house grounds. And, frequently, she has sharp words for her counterparts in the mainstream media. Describing a moment on “Meet the Press” in 2013 when then-host David Gregory asked investigative reporter Glenn Greenwald if he should be charged with a crime for aiding and abetting whistleblower Edward Snowden, Goodman writes, “It was a stunning accusation, laying bare the way that some elite journalists view their proper role as partners in power.”

“Democracy Now!” shares its Manhattan building with a custom furniture shop, an entertainment law firm, a jewelry company and other production studios, among other tenants. And on the morning in late March when I visited the studio, Goodman (who was without her usual co-anchor, Juan Gonzalez) began the broadcast with the rapid-fire delivery of headlines about arrests of protesters blocking the road to a Trump rally outside Phoenix, a U.S. marine killed in Iraq, a Mexican activist released from prison after more than two years of detention condemned by the United Nations, a deadly suicide bombing in Turkey, and a Western Massachusetts activist’s obstruction of a planned gas pipeline with a 10-by-15-foot replica of Henry David Thoreau’s cabin.

Afterwards, there was a “Democracy Now!” correspondent’s report from a recent anti-Trump protest in New York, and an interview, via satellite in Havana, with a former Cuban diplomat and an American academic about President Obama’s historic trip to Cuba — the first for a sitting U.S. president in 88 years. Goodman concluded with a lengthy in-studio conversation with two African-American men — a well-known 74-year old Harlem organizer and an anti-mass incarceration advocate who serves as an adviser to Mayor Bill de Blasio — who were recently arrested while trying to mediate a police encounter with a homeless man in midtown Manhattan. When the show ended, at 9 a.m., Goodman stayed in the studio to tape a fundraising pitch for Free Speech TV, one of the many carriers of “Democracy Now!” “Independent media is the oxygen of a democracy,” she said at one point.

Afterward, Goodman gave me a tour of what she calls “the greenest Internet/TV/radio studio in the country.” She proudly pointed to doors that are reclaimed after being discarded by other buildings, and to countertops made from recycled glass. “These are my mom’s chairs,” Goodman said as we walked past a snack area.

Eventually, she led me through the thick, heavy door and onto the newscast’s set. Pointing to the bookshelves that lined the walls, she said that major-network shows often show fake, green screen book backdrops.

“But these are real,” she said. “This is a functioning library. One of our first hires was an archivist because we knew we were dealing with a huge amount of information and documentation of the movements in this country and around the world.”

Goodman is a descendant of rabbis on both sides of her family: a grandfather and a great-grandfather. She was raised in Bay Shore, New York, by parents she once described as “very civic-minded, community, peace activists.” Her father, George Goodman, an ophthalmologist, was affiliated with Physicians for Social Responsibility; her mother, Dorothy Goodman, was an English literature teacher turned social worker.

We talked about this as we sat in her office, overlooking the Manhattan Skyline, after the morning show’s taping. Goodman now wore a knitted wool winter hat and sipped tea from a “Democracy Now!” mug showing a microphone dissolving into a flock of doves.

Goodman says she was raised “in a secular way,” but explained that many of her core principles are closely entwined with Judaism. For her, being Jewish means “a deep belief that ‘Never again’ means never should any group of people be oppressed like we saw in the Holocaust,” she said. Her Judaism also imbues her with “deep respect for everyone and everyone’s traditions… Muslim, Hindu, Christian, Jewish.” A third Jewish principle? “Question everything.”

These themes are often palpable in “Democracy Now!” And the show is an approach to journalism that shows no signs of slowing. Goodman says that, on average, one new TV or radio station picks up the show each week. The show is broadcast in Sweden, Japan and elsewhere around the world, and it has over 1 million social media followers, between Facebook and Twitter.

During our conversation, I pointed out that she has been hosting the show longer than any of the major network’s nightly news anchors have been at it, and even alternative-media stalwarts like Jon Stewart, who retired from “The Daily Show” after 16 years. She responded by calling her work a “life mission.”

“The corporate media leaves such an enormous vacuum,” she said. “They go to the small circle of pundits who know so little about so much, explaining the world to us and getting it so wrong.” The draw of her show, she said, is not whether you agree or disagree with everything you hear. “It’s the diversity of voices, experience — the wisdom of people on the ground who are doing the work of democracy in our country and around the world,” she said.

Phliip Eil is a freelance journalist based in Providence, RI. He is the former news editor of the Providence Phoenix.

How a Rabbi’s Granddaughter Became the Host of Democracy Now!