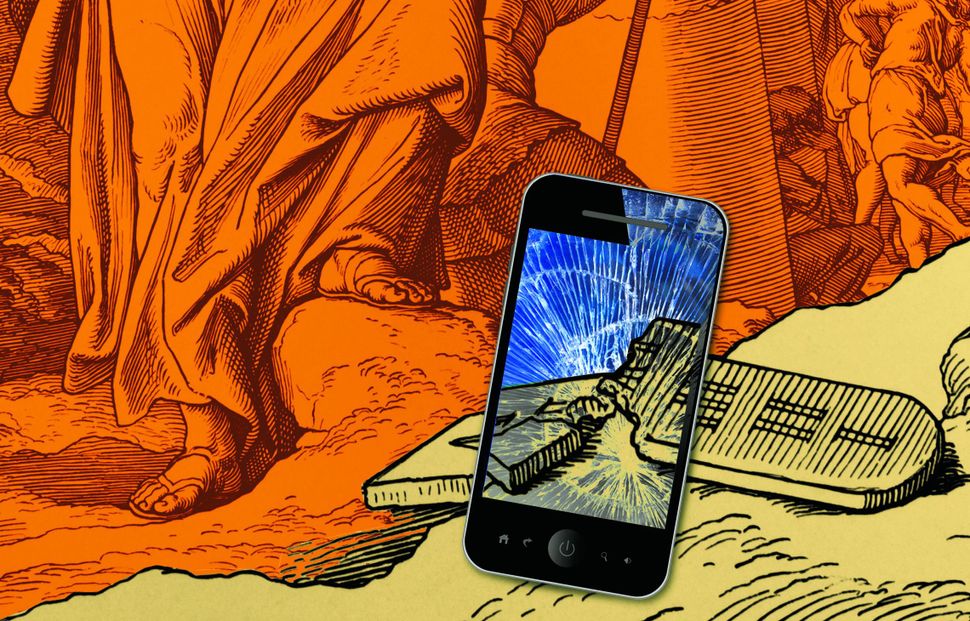 It happened in dribs and drabs over the course of an entire summer, right down the street from my house. First the brick facade was repainted from a garish neon salmon to a depressing stucco beige. Then the faded awning was replaced. The out-of-date posters for local high school plays, blood drives and block parties were finally removed from the whitewashed storefront windows and shelving and help-wanted listings appeared through the newly-cleaned glass. Finally, the title of the newest business to occupy this woeful corner spot (every town has one—a shop/restaurant location that changes hands more frequently than the Defense of the Dark Arts position at Hogwarts) appeared in all its generically-branded glory: iFixscreens.com (as if a url in their business name could hide the shaky prospects of their brick-and-martyr location).

I’ve never been a big fan of iPhone cases. The 21st century equivalent of a tacky slipcase sofa cover, an Otter Box would place a hard plastic barrier between me and the gloriously bright, shiny surface that Jony Ive hath given me. I accept the terms of the Faustian bargain between me, gravity and my limited warranty, and hope for the best. So it came as no surprise that a month before iFixscreens.com opened for business, my iPhone fell a mere two feet from the arm of my couch and landed screen-side down on the lip of my drinking glass, shattering both in the process.

The crack begins on the left edge at the volume-down button, and arcs upward to the top right corner of my screen. Two tributaries swoop down, forming a delta that empties directly into the center of whatever Youtube cat video, work email or longform essay I’m trying to view. The crack is deep enough in one spot that I find myself constantly rubbing it with my thumb. The touchscreen still works, but strategic scrolling is necessary to take in the entirety of the screen’s content. After dealing with my broken screen for a month, I eyed the new storefront warily as I drove home from work, surprised that it triggered within me a conflict that was as much existential as economic. Should i Fix my screen (dot com)?

Millions of Americans do indeed head straight to businesses such as iFixscreens.com, supporting the $1.4 billion-a-year cellphone repair industry that is growing at an annual rate of 5%. Brave souls buy their own replacement screens online. Millions more simply choose to chuck, recycle or Gazelle their phone at the moment of disfigurement. But what if instead of discarding or repairing our phones, we simply continue to use them, cracked screens and all? When I whip out my phone with its ugly, fractured display, does it mark me as stubborn, cheap or lazy, or could it present an opportunity to “think different” about our unrealistic desire to preserve (and present) ourselves in a bubble of perfection? Viewed in the right state of mind, the random cracks on our screens, like the lines on our palms, can help us divine something we already know, deep down, about ourselves: We are cracked, yet functional.

Like the Japanese art of Kintsugi, where the gold-laquered seams of a restored piece of pottery speak proudly to the broken object’s history and persistent value in an imperfect world, a broken iPhone can connect its user to others in a similar predicament, as they swap stories of drunken post-karaoke mishaps, innocently-curious toddlers, or a simple case of genetic clumsiness. Once my screen shattered, I started to see broken iPhones wherever I looked. I marveled at the topographical variety of the screens I encountered, from the single bold crack of my neighbor’s iPhone 6 to the dozens of eggshell-like fissures that spread across the screens of my bar and bat mitzvah students’ hand-me-down iPhone 4’s and 5’s.

As a cantor, I prepare dozens of adolescents each year to become bar or bat mitzvah. When I first chant a student’s Torah portion onto their iPhone, if I see that their screen is broken I might ask them if they know the Talmudic legend about what happened to the two stone tablets containing the Ten Commandments. Not the ones that Moses eventually brought down from Mount Sinai, but the original set—the ones he hurled down in a fit of pique when the young nation rebelled at the expectations placed before them by a demanding God. The Talmud says that when the people made their way through the wilderness, they took with them not one ark, but two. The Ark of The Covenant contained the second, whole tablets, and remained hidden in the holiest section of the sanctuary, accessible only to the priestly cult. But legend has it that there was another ark, a simpler one, which contained the shattered remains of the original, broken tablets, and this set would come and go with the people wherever they journeyed, offering constant reassurance that their value lay not in perfection, but in perseverance.

I think about this Talmudic story a lot, as I pass iFixScreens.com on my way to work, and when I see my students with their shattered iPhones, struggling to let their own light shine through the cracks in the comfortable childhood personas that they must shatter during adolescence.

I squint at my iPhone screen and look up a reference to the shattered tablets in the writings of Jewish French poet Edmond Jabés, taken from Paul Auster’s “Art of Hunger”: