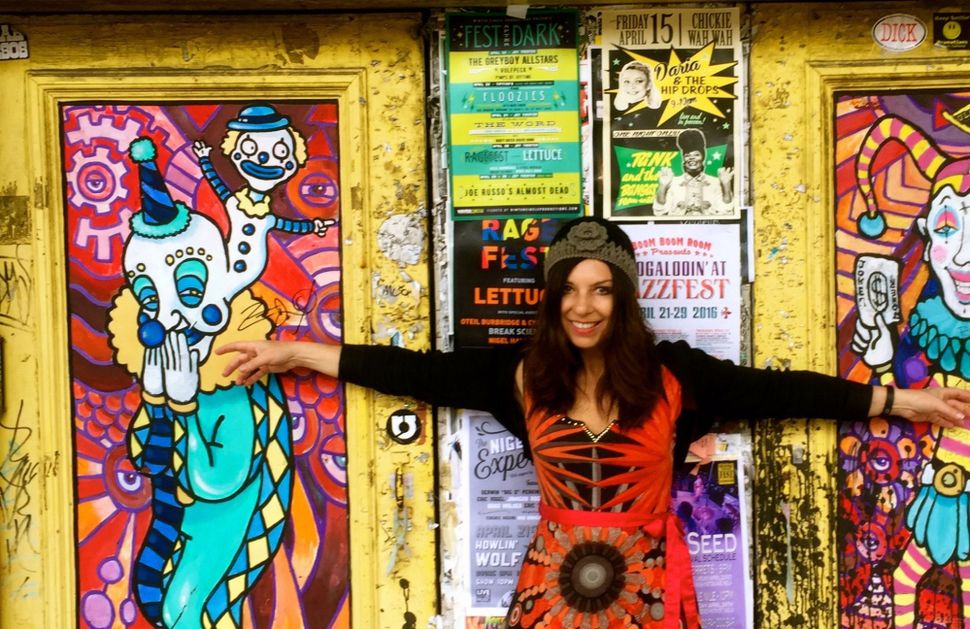 Image by Courtesy of Adeena Karasick

For twenty years, KlezKanada has offered a summertime retreat for musicians and music lovers in an idyllic setting in the Laurentian mountains at Camp B’nai Brith in Lantier, Quebec, an hour outside Montreal. In some ways, it has been the summer camp version of the now-defunct wintertime KlezKamp that took place for 30-some years in the Catskills.

But for the last few years, a new poetry program has been drawing a new and different crowd of creatives to this annual Yiddish retreat. Would-be Mordechai Gebirtigs and Aliza Greenblatts have been flocking to KlezKanada to study with real-live Jewish poet and performance artist Adeena Karasick, who runs the week-long workshop – which this year takes place August 22-28 – that combines reading, discussion, writing, and performance.

“There are so few opportunities anywhere in the world for aspiring writers and poets with a specific Jewish and Yiddish orientation to take part in a serious residential workshop,” says Karasick. “It’s like the Iowa Writer’s Workshop for Yiddish, albeit only for one week out of the year, but promoting collaborations with musicians, performance workshops, hand-sewn chapbook creation – all nestled in nature and under the stars.”

Those enrolled in the poetry retreat are encouraged to make the most of their residency by taking part in other activities at KlezKanada, which is as much a social getaway with a large number of regular attendees as it is an arts and culture program. Although not required, writers are especially encouraged to team up with musicians to mix their original poetry – which often winds up being written and performed in several languages, including Yiddish, of course – with original music.

The poetry retreat-within-a-retreat isn’t the only non-instrumental aspect of KlezKanada, which has always taken pride in its mission as an all-encompassing festival of Jewish arts and culture. In addition to learning how to play klezmer, workshops include singing, folk dancing, Yiddish language, literature, theater, film, and other topics. Every night, the festival offers concerts by international festival faculty and well-known performers such as the Klezmatics and SoCalled, followed by a “KlezKabaret” and late-night jam sessions.

“It was a no-brainer to build a program upon the rich body of Jewish and Yiddish poetry and to have it led by Adeena,” says Frank London, a cofounder of the Klezmatics who has served as artistic director of KlezKanada since 2012. “Adeena’s focus is not only about what’s on the page, but also about taking words to the stage and bringing them to life, often with musical accompaniment – a tradition that goes back, if you think about it, at least as long as Torah has been chanted.”

Every summer, there is an overarching theme to KlezKanada. This year, the program is devoted to Sholem Aleichem on the occasion of his centennial yahrtzeit, and poetry workshop participants will investigate the beloved Yiddish writers relevance and storytelling techniques, as well as those of 20th-century Jewish avant-garde poet Edmond Jabès.

A native of Vancouver, Karasick is now based in New York City, where she is professor of literature, critical theory and performance at Pratt Institute. She is a 2016 Mellon Foundation Award recipient, the author of seven books of poetry and poetics, and a star in the performance poetry world, featured in numerous videos on YouTube, including her controversial hit, “I Got a Crush on Osama.” She and Frank London have created the critically acclaimed spoken-word opera, Salomé: Woman of Valor, which features London’s klezmer-bhangra fusion and combines diverse poetic traditions, jazz, and new and ancient improvisation techniques.