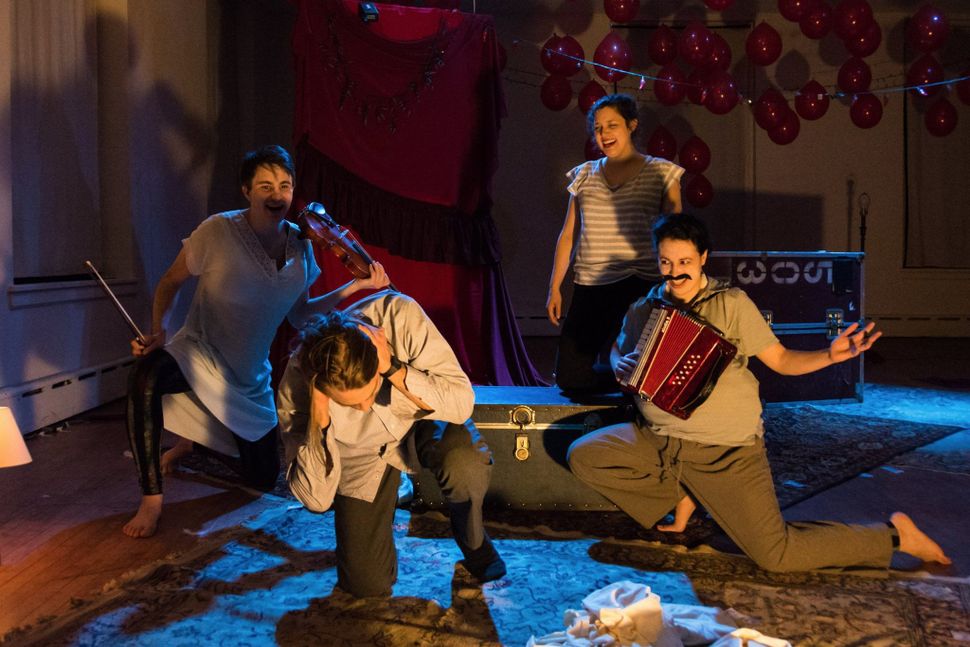 Will Steinberger, part of the founding trio of InVersion Theatre, has close-cropped dark hair, rectangular tortoiseshell glasses, and flighty, energetic hands. He’s an eager young artist whose ideas seem to constantly threaten to stampede inside his mind, talking with an engaging – and sometimes terrifying – rapidity. That mindset makes a InVersion’s current production of “Gregor,” a devised Vaudevillian take on Franz Kafka’s “The Metamorphosis,” the ideal vehicle for Steinberger as a director. It’s hectic, adaptable, ripe for intellectual debate, and invitingly weird.

I met Steinberger at Manhattan’s Access Theater, where “Gregor” played through May 8th, to get some background on the show. It was the play’s tech week, and as we spoke, crew members hung strands of lights that would be at home in a tiki bar over the stage. The look was ragged, haphazard, and surprisingly colorful, which was just what Steinberger was looking for.

Could you tell me about the genesis of this project?

We started with a general sense of the tone I wanted, which is a vaudevillian vibe. We got really excited over the idea of making something new. There’s something really interesting about Kafka’s pure level of self-hatred of his artwork. He’s such a great artist who also has all these erasures, which for me are ways into the play. That was a big thing: this is interesting for adaptation.

In going back and reading “The Metamorphosis” around 18 months ago I identified Gregor as a proto-Millenial. His relationship and alienation to labor and secondarily to the state, as reflected through the metaphorical deep alienation to his family, is kind of appropriate to what people my age feel today.

This is a play that’s been created through workshop on workshop. What are some of the ideas that came out of those workshops that most surprised you?

There’s a dialogue between generations, intellectually. I think there’s a good deal in the piece about how we negotiate the transactions of love, [and] affective labor. That’s something I was not expecting. I thought it would feel a little bit more central to the Gregor [and] Grete characters and to me that’s still the emotional access point. It’s a story about how families negotiate the material of their love and how they’ll live as a family in their given economy. The economy that we’re talking about in the play is some sort of absurdist mash-up between 2016 and 1915. But of course this is actually a real question that people ask.

The first time I read “The Metamorphosis” I remember feeling physically ill at it, and throughout “Gregor” characters react to him with disgust. In devising the play, did you want to address the gross factor?

The prevailing notion in Western literary interpretation has been that Gregor Samsa’s metamorphosis is a metaphor for his existential alienation from the family and the state. I thought the best way to show that was no funny business, no secretion, no bug apparatus on him. So it becomes, what are they really seeing in the grossness? And we think what they’re really seeing in the grossness is his lack of labor, his inability to provide for his family.

What do you think Kafka would think of this adaptation?

You mentioned you’re interested in creating other Kafka-oriented plays. Can you tell me more about that project?

In my grandest grand scheme this is part of a trilogy or four-play series inspired by Kafka. This would be one. The second one would be called “Gregor Maaaaan,” and it’s like the Gregor Samsa story meets Spiderman. This kid has turned into this bug [in] the weeks leading up to his Bar Mitzvah, and he’s trying to figure out how to make it happen. Right now I don’t have a way to make the family dynamic sufficiently different from this, but we’ll work on it. It’s comic book in tone. And then I’m really interested in a piece that would explore the family dynamics more and lead into questions of Jewish family identity and dynamics now. And I would love – don’t steal this idea – to see this play of Kafka going crazy at the travelling Yiddish-affiliated troupe in Prague.