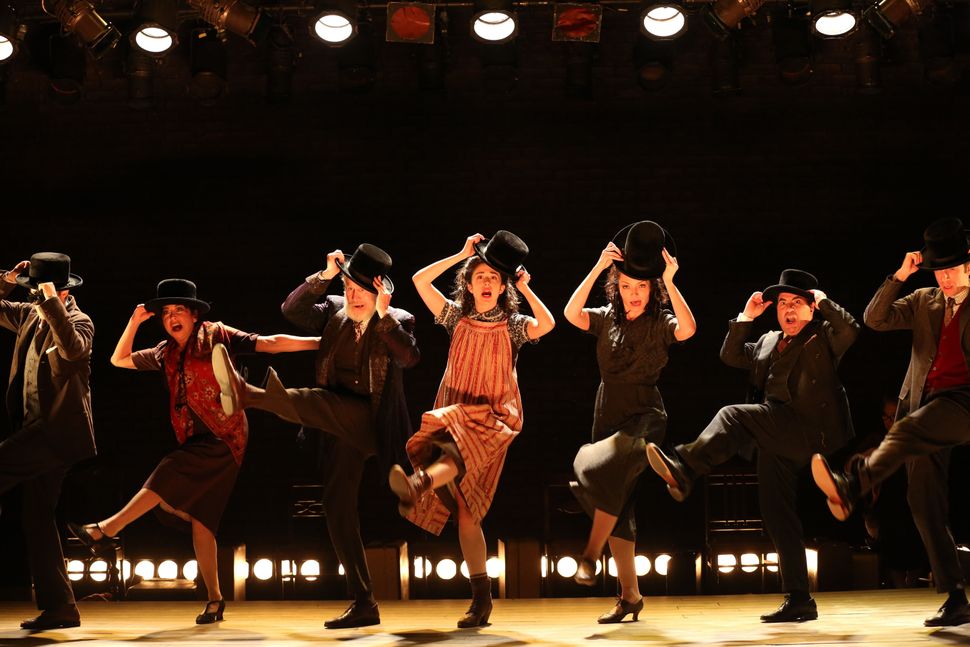 “Indecent” at the Vineyard Theatre Image by Carol Rosegg

From the moment of its inception in 1906, Yiddish writer Sholem Asch’s play “God of Vengeance” was an object of controversy. Set in a Jewish brothel, the plot revolves around a love affair between a prostitute and the virgin daughter of the brothel’s owner. In its final moments, the play depicts the brothel owner, having discovered his daughter’s forbidden love, banishing her to the whorehouse, and in a fit of rage, dramatically desecrating the Torah. This combination of lesbianism and what some claimed was Jewish heresy and others claimed was an indictment of Jewish hypocrisy, all wrapped up in a well-formed, heartstring-plucking melodramatic mode, was enough to turn the play into a succes de scandale and make Sholem Asch internationally famous.

In 1923, after having been performed successfully for years, first in Europe and then New York, “God of Vengeance,” transferred in a newly translated English version from the Provincetown Playhouse in Greenwich Village to the Apollo Theater on Broadway where, in what was at once the greatest achievement and the greatest failure in the history of the Yiddish theater, its producer and actors were arrested on obscenity charges and the show was closed down.

And who was it complaining to the authorities about the moral turpitude of “God of Vengeance?” Why, the leaders of the Jewish community, of course, specifically Rabbi Joseph Silverman of the influential Temple Emanu-El, who believed that entertaining Broadway’s gentile clientele with the airing of Jewish dirty laundry was recklessly, dangerously bad for the Jews.

However rich the themes of “God of Vengeance” may be, the cultural and political fault lines that were exposed by its transition from the Yiddish theater to the broader, more secular landscape of Broadway have come to overshadow the play itself in the popular imagination. When we think of it now, what springs to mind isn’t its daring evocation of lesbian love or its exposure of the gulf between the lives of Jewish people and their holy imagination of themselves. Instead, we think of the controversy surrounding the play, the turf war played out on this side of the Atlantic over who would control the Jewish imagination. The play itself lives in the shadow of its success.

Paula Vogel and Rebecca Taichman, have set out in their new play “Indecent” (conceived by them both, written by Vogel and directed by Taichman), which recently opened at the Vineyard Theater, to celebrate the spirit of “God of Vengeance” and interrogate its place in history.

With a crackerjack ensemble of actors (here called the Troupe) playing multiple parts, they map the life of “God of Vengeance,” from the day a young Asch hovers over his wife’s shoulder as she reads the just completed manuscript, through its first table read in Warsaw, its opening in Berlin, then Petersburg, Rome, across Europe and on to America where the events described above are paraded across the stage, and then to further productions back in Europe.

With the help of Lemml (an eager Richard Topol), the “stage manager for the evening,” we are introduced to the various people who contributed to the play’s success: Asch (when young, an earnest Max Gordon Moore, then later, a loose-limbed Tom Nelis); Rodolph Schildcraut (Nelis again), the celebrated German Jewish actor who leads the troupe; a series of actresses who play the prostitute, Manke, and the virginal Rifkele (Katrina Lenk and Adina Verson, respectively, consistantly) through the majority of the productions of the show and who, it is implied or made explicit, carry on backstage love affairs with each other; a slew of other characters who contribute to helping the play along on its journey toward Broadway or rail against it and all it stands for.

Despite this, for much of the evening, the central action treads lightly on human conflict. With a few exceptions, the characters are there to illustrate notable moments in the life of the play. As the evening goes on they, with the exception of Asch and Lemml, begin to blur into a collection of every-Jews, the personalities of the individual characters in the story subsumed in the personality of the “actor” playing multiple roles.

Which may be the point.

Vogel and Taichman want us to remain focused on the big ideas being explored on the stage: the eruption of Jewish art in Europe before the war and the schism this amplified between the secular and religious Jewish traditions, the difference between art for us and art for them, the difficulties of translation between languages and cultures, the simplicity with which a celebration of homosexual love can be manipulated into a condemnation, the responsibility of the artist to those he or she inspires.

They’ve pulled out an arsenal of Brechtian tools to ensure that we don’t stray: an intentional artificiality to the staging; tableaus; pointed songs (good ones, by Aaron Halva and Lisa Gutkin of the Klezmatics!) reinforcing the themes we’ve just seen dramatized and cleverly performed by the Troupe and a ragtag onstage band; supertitles that sometimes inform us what to pay attention to, sometimes guide us through the action of a scene, sometimes provide us with ancillary information, sometimes — most effectively — do the work of telling us when a character has switched between English and Yiddish as he or she continues speaking the same language.

For much of the evening, the effect of all this is to give the feeling that we’re watching a pageant more than a human drama. We’re led toward the same well-worn insights we’ve come to expect from work that looks back at the bigotry of the past. There’s much discussion of forbidden love, much righteous rhetoric about truth and beauty. For the Jews in the audience, an extended quasi-talmudic debate about the necessity and risk of reaching out to the stranger and a cameo by Abraham Cahan, the legendary editor of this very paper. There’s also one spectacularly good joke: “Do you know what a minyan is? It’s ten Jews in a circle accusing each other of anti-semitism.”

As far as it goes, this would all be fine and good, if a bit sterile and unsurprising, speaking in a language that liberal-minded, Jewish-ish New York theater audiences understand and flattering our pre-existing biases.

Fortunately, Vogel and Taichman have a few more tricks up their sleeves and in the final third of the play, a more nuanced, more profound story emerges. As the narrative moves beyond the obscenity trial toward the darker, graver conflicts of World War II, the more didactic elements of the play turn dreamy and the alienation techniques are used against themselves and something beautiful and sad transpires on the stage, building, finally to a scene from the original “God of Vengeance.” It’s a scene that’s been discussed continually throughout the evening. It’s called The Rain Scene. We’ve witnessed portions of it a number of times already. Now, at the very end of the play, we watch it again, not once, but twice. And with each retelling, it takes up more space on the stage until it bursts off the stage, finally, pushing through the artificiality we’ve been subject to all evening. Asserting its reality. What the scene depicts is two Jewish women, filled with a pure an joyful love for each other, dancing in each other’s arms as a cleansing rain falls over them.