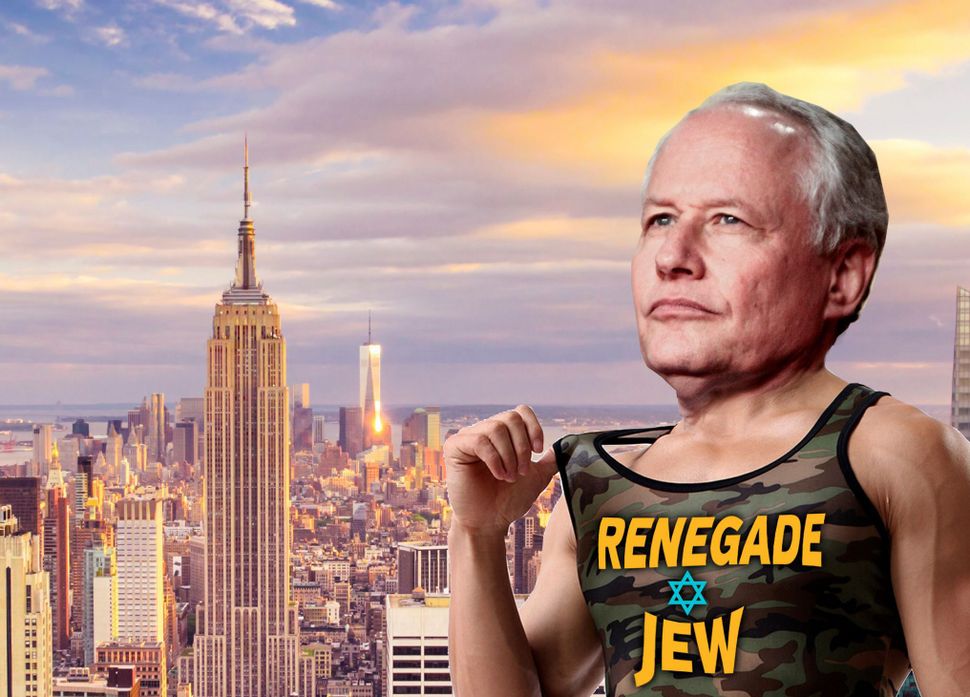 I’m a Renegade Jew. It didn’t start out that way. I was just an ordinary Jew, putting in my Jewish time, observing the Jewish calendar, mostly blowing off my Jewish responsibilities except for lip service to the faith on Yom Kippur and Passover.

But I still did what I thought was right, for Judaism and for my country, by helping George W. Bush become president, because he was “good for Israel.” I wrote influential op-eds, I went on TV, I obfuscated and I apologized for war crimes.

It’s what I’d been raised to do, as a conservative Jewish intellectual. But then one Sunday morning, I went out for bagels. I shouldn’t have gone to Zabar’s; it wasn’t safe. Then I came home to a nightmare. They’d gotten to my family, the monsters. Everyone — my father Irving, my uncle Schlomo, my second cousin Leon Epstein, my daughter Shoshanna — had been viciously slandered on the Internet. Like dogs, our opinions meant nothing anymore.

After all I’d done for Judaism, for the cause, for America, my Republican colleagues had betrayed me by supporting Donald Trump.

I had no choice.

I had to go renegade.

These Republicans are dirty. They are animals. They are treyf. I don’t recognize them anymore. This party is a sewer. Do you think you can clean it up, with your snarky Internet comments, with your memes, with your viral videos? Those are half-measures. They’re not stopping anyone, or anything. Only a Renegade Jew can do the job. A Renegade Jew with a presidential search committee.

As I sit here on my rooftop on Manhattan’s Upper West Side, sewing up my interparty wounds with the sinew of my intellect, I wonder where it’s all gone. Where’s the Republican Party I once knew, the party of great minds and great men — of Reagan, of Dole, of Dennis Hastert? Gone, all gone. William F. Buckley won’t be riding in on his yacht to save us. But I could be.

The other day, I went to David Horowitz’s office. I kicked the door and broke my toe. Fortunately I have a vast family fortune and good private health insurance.

I knocked. “Come in,” a traitorous voice said. I went in. There sat Horowitz, behind his desk, typing his apostate words. He looked up, fear in his eyes.

I leaned in toward him so that he could smell my breath mint and see my two-hour-old stubble.

“WHO DO YOU WORK FOR?” I wrote firmly on a Post-it, which I slapped on his desk, hard. Horowitz recoiled at my all-caps.

“We all work for Trump,” he said, gasping.

As I stormed out of the office, shooting dirty looks at seven or eight people, Horowitz shouted: “You’ll never stop Trump! He’s too powerful. Trump owns all of them, all the conservative men of letters!”

That’s a load of recycled issues of Commentary. Just because opponents are strong doesn’t mean you shouldn’t fight them. The collected wisdom of my family has taken down empires, dictators and assistant professors of women’s studies at Wesleyan. Giving up isn’t in my vocabulary. I will never surrender my byline, my magazine, my seats on various boards of directors, or my commitment to intellectually advocating the invasion of various countries without provocation. The anti-intellectual likes of Donald Trump won’t knock me down. We will have a new president, and that person will be my choice.

I am the hero America deserves, but not the one it needs right now. So they’ll hunt me, because I can take it. I am a noisy guardian. An omnipresent talk-show guest.

Neal Pollack’s latest book is “Not Coming to a Theater Near You.” Twitter, @nealpollack