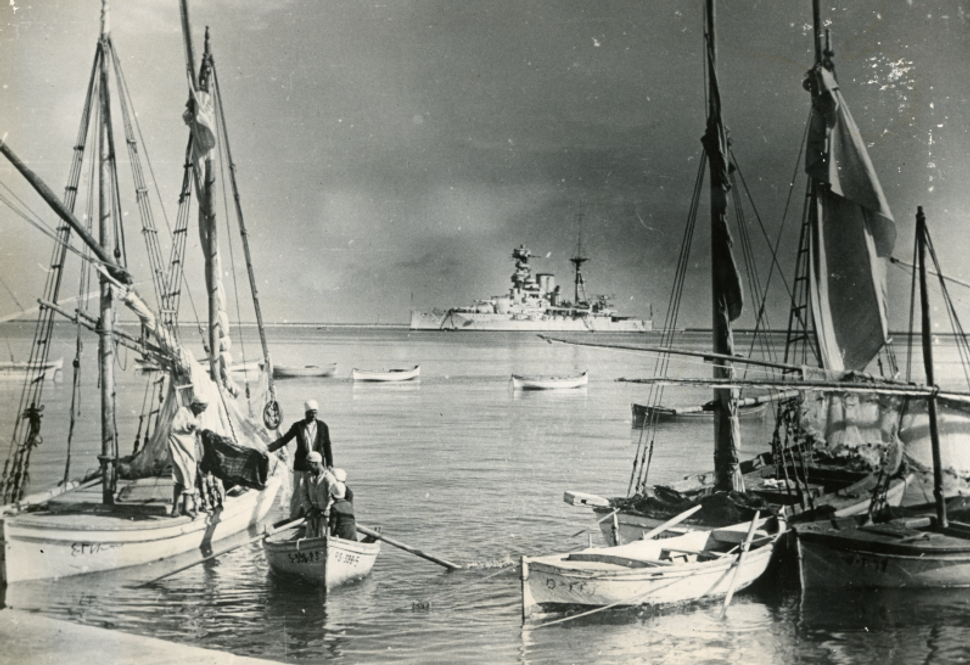 British Protectorate: A photograph of the Suez Canal in Egypt during World War II with the British warship Barham standing guard and a number of fishing crafts getting ready to put to sea. Image by Forward Association

Defense lawyers for Manhattan Lower East Side resident Abraham Rotman called for a retrial after the jury found the defendant guilty of murdering Saul Jacobs by stabbing him on the corner of Eldridge and Stanton streets. Rotman, who was walking with a woman on Stanton Street when the murder took place, was arrested on the spot. The woman, known only as “Annie,” disappeared during the arrest and never resurfaced to testify. Among those who did surface to testify against Rotman were the gangsters “Little Hymie” and “N——- Benny,” the latter of whom is known to have murdered “Pinchy,” another gangster. For his part, Rotman has argued that he is innocent and that the gangsters framed him. He claims that the real killer is actually “Little Hymie,” though he has not proved it.

Since the Soviet Union occupied Lithuania in 1939, the Jewish population there has begun to undergo the process of Sovietization in cultural, economic and social matters that the Jews in Belarus and Ukraine underwent 25 years ago. Steps have been taken to ban kosher slaughter in Lithuania. Kosher meat is still available, but only from those Jewish butchers who have not yet been forced to join the cooperatives with Christian butchers. Most Jewish butchers, it is said, have joined a cooperative. It seems that kosher meat is becoming difficult to find in both Vilna and Kovno. In any case, chicken has become very expensive, and cows are entirely unavailable. Jews in Lithuania, it appears, are not eating much meat at all. Finally, although the paragraph from the Soviet constitution outlawing racism and anti-Semitism has been printed repeatedly in Lithuanian newspapers, anti-Semitism is apparently still a problem.

The West German government has resumed its investigation into the Nazi past of Erwin Schille, who held the post of lead researcher into the issues of Nazi crimes. Despite the fact that Schille found evidence incriminating himself, this new investigation is actually the result of the Soviet Union announcing that it has witnesses. There are several witnesses who claim that Schille engaged in terrible crimes during the Nazi invasion of the USSR. The Soviet government also announced that it was prepared to allow German investigators into the Soviet Union in order to interview these witnesses, according to whom Schille personally shot two Russians and attempted to execute a third. Additionally, Schille is said to have been involved in the mass murder of 241 Russian civilians.