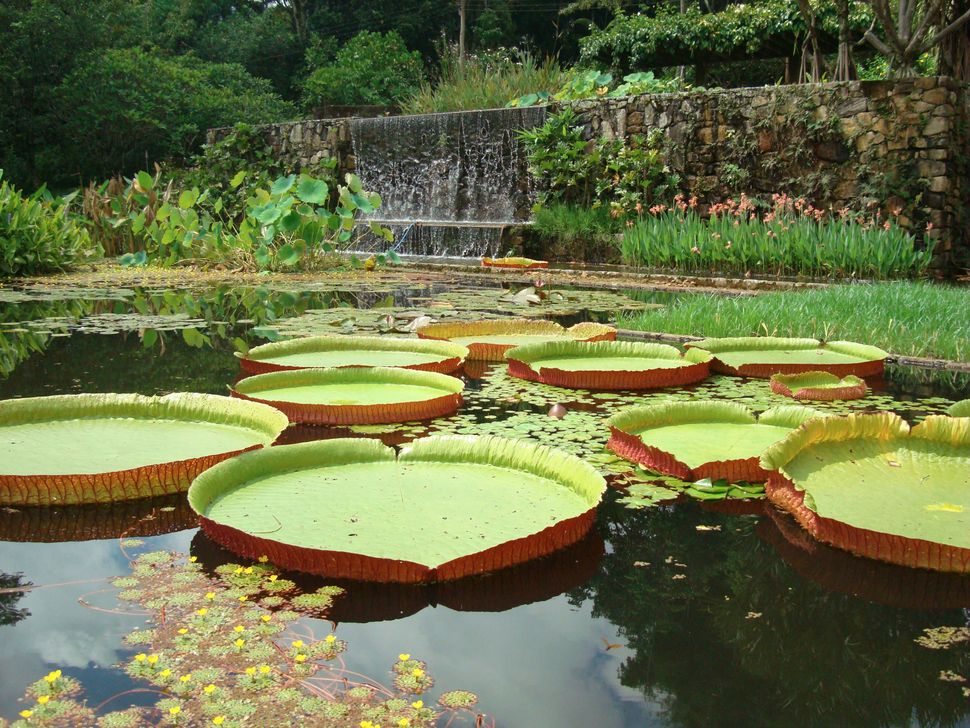 Walking into the Jewish Museum’s new exhibit on Roberto Burle Marx, the Brazilian landscape architect best known for his strikingly patterned seaside pavements on Rio de Janeiro’s Copacabana Beach, the first thing you’ll notice is the tapestry. At 87 feet long, it occupies the back wall of the main exhibition. It’s long, lean, abstract — banish any idea of medieval wall hangings — a gray background occupied by eccentric, blocky shapes in blue, beige and a soft, greenish yellow.

The fabric dominates the space. It’s a brilliant choice for an exhibit on Burle Marx, an artist who worked in many mediums – paint, jewelry, sculpture, textile. Yet Burle Marx’s most stunning work is impossible to exhibit, since it is in and of the earth: intricate gardens framed by walls adorned with vibrant ceramic murals, sumptuous public boulevards and plazas, the iconic beachfront promenade at Copacabana.

That design is mean to evoke one of Burle Marx’s landscapes, from that tapestry, a fitting visual quote of his bright ceramic walls, to the central display, which breaks off in segments reminiscent of the geometrically innovative islands of plants he favored in his garden design.

Coming across photos of those gardens, which are verdant, mysterious, almost ecstatic, it’s difficult not to feel a twinge of regret that you’re not in Rio, strolling through one. Still, the Jewish Museum does an admirable job of mimicry, transforming the gallery into a surprising, invigorating space that, despite its open plan, feels as though it’s full of secrets to be discovered.

Looking at the central display, it’s a shock – a pleasant one – to find yourself caught in an unexpected, understated current of sound, revealed to be a Burle Marx-inspired soundscape by the producer and musician Arto Lindsay broadcast at intervals throughout the gallery. Dominique Gonzalez-Foerster’s video of Copacabana’s beachfront on New Year’s Eve plays in a loop on a recessed wall, its meandering narration and cinematography creating a dreamlike effect that beautifully accentuates the whimsical denseness of Burle Marx’s work. Both artists are included as part of a showcase of contemporary artists inspired by Burle Marx, their contributions spanning most mediums and curated so tastefully as to almost blend in to the parade of Burle Marx in which they’re situated. (The “almost” is important; Burle Marx’s work was engineered to surprise, and the work of Lindsay, Gonzalez-Foerster and their peers is just different enough from his to highlight that spirit.)

Burle Marx was born to a German-Jewish father and Brazilian-Catholic mother in São Paulo in 1904. Before embarking on a career in landscape architecture, he was a painter and studied in Germany, where he saw an exhibition that celebrated Brazil’s native plants as prized specimens – a contrast to his home country’s neglect of its natural wonders. Returning to Brazil, Burle Marx rejected the dominant Brazilian ethos of landscape architecture. (As Hoffmann and co-curator Claudia Nahson write in the exhibit’s catalogue, since the late 19th-century, Brazilian gardens had “primarily followed French models, featuring a symmetrical layout and imported flora.”) Burle Marx made a career-long crusade to increase the use of native plants, and he exulted in asymmetrical, wild design.

The exhibit pays thematic homage to the eccentric energy that makes its subject so fascinating. Burle Marx was known for his ecological enthusiasm – throughout his botanical career he discovered close to 50 species of plants – and just as in one of his gardens it was impossible to predict what new species might be planted, in this retrospective, there’s no way to predict what new manifestation of his art will appear around the corner. Will it be a meticulously sketched study of the Pithecollobium tortum tree, executed in such meticulously creative detail that it appears to be a plant the artist imagined rather than one he observed? An astonishingly lovely oil portrait of a woman in a partially undone pink slip, her expression sad and still? A blocky gold necklace that looks as though it could easily serve as an accessory for someone walking a red carpet?

“I want people to walk away thinking about him as a multitalented polymath,” Hoffmann said, echoing Burle Marx’s own words, as quoted in the introductory essay to the exhibit’s catalogue: “all expressive media are important to me – gardening, tapestry, jewelry design, drawing, painting, plant collecting – because they can all be used like a poet searching for words to juxtapose.”

Burle Marx was not purely an aesthete; his work was frequently political, although rarely overtly so. “He was really interested in social justice,” Hoffmann said. “He was interested in Brazil’s past as a country that had suffered from colonialism. One of his first projects was to introduce sugarcane, which was a symbol of resistance against the colonial Portuguese forces.”

Although Burle Marx wasn’t religious, he possessed a spiritual bent. He collected Brazilian religious objects, found inspiration in the model of St. Francis of Assisi and, later in life, turned his artistic eye to a number of Jewish projects. He did the landscape design for several Brazilian synagogues, including one in which he planned an unexecuted set of startlingly vibrant stained glass windows. The design for those windows, mounted on one of the museum’s walls, speaks of a rare spiritual exuberance, an infusion of joy in the serious business of faith.

One of Burle Marx’s last projects, a collaboration with Brazilian Jewish artist Sulamita Mareines and her architect son, Ivo, was a design for a garden for the Hebrew University in Jerusalem. The garden was never executed, but Burle Marx’s surviving plans for it provide a compelling vision. Visitors would have entered the garden, located on a hill above the city, through rows of cypress, emerging on the highest of three circular tiers. That tier would have had a striking simplicity: a central lit flame flanked by semicircular reflecting pools. The next tier, slightly larger, would have centered on four large glass sculptures by Mareines, one for each element; the last tier, opening onto a view of Jerusalem’s Old City, would have had the kabbalistic diagram of the Tree of Life inlaid in its center. The plan, sparse and precise, exudes an almost holy grace.

It’s the exhibit’s best evidence that Burle Marx, best known for his kaleidoscopic energy, had the poet’s eye he imagined. It’s easy to imagine him there in Jerusalem, pacing the site he’d been given to work with, looking out at the city, looking in at the land, and waiting, patiently, for it to speak.