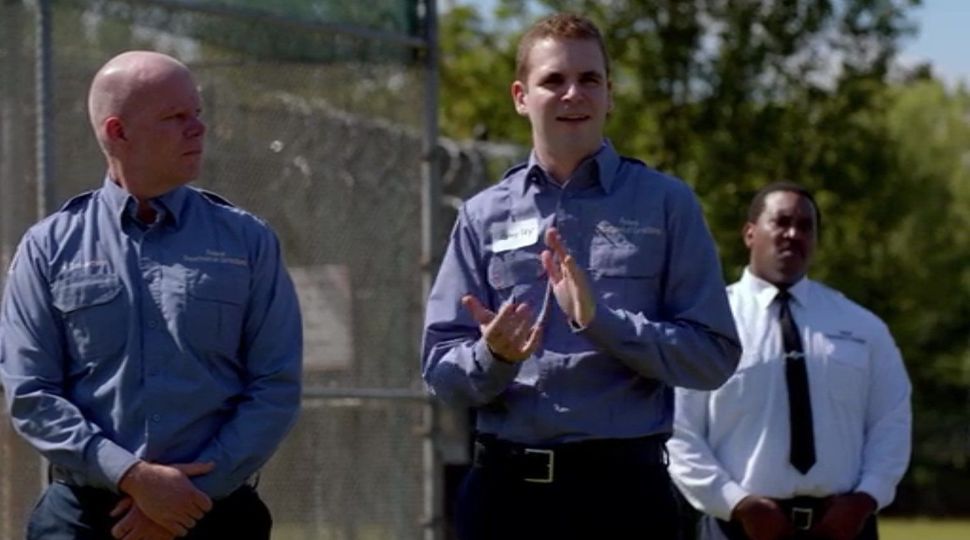 Alan Aisenberg in a scene from “Orange is the New Black.” Image by Netflix

Alan Aisenberg won’t really say what’s going to happen to his character, Officer Bayley, on the upcoming season of “Orange is the New Black,” but from the way he winkingly edges around the topic — it’s going to be good.

“Shit gets very real for Bayley,” he said, followed by a cryptic “This is a very dark season. It hits every emotion.”

Fans of the hit Netflix series may remember Aisenberg as Litchfield Prison’s youngest, and easily most endearing, guard who gets roped into helping the show’s star Piper (Taylor Schilling) with an illicit underwear smuggling operation.

I met up with Aisenberg last month on a sunny day along Manhattan’s West Side Highway, where we landed a bench looking out onto the Hudson River. He propped himself comfortably back on his seat, long legs stretched onto the iron bar in front of us.

After some tiptoeing around the topic of the new season — which, much to the delight of binge watchers everywhere, will be released on Netflix June 17 — we circled around to the very first scene he shot for the show, a flirty eye-batting exchange between himself and Laura Prepon.

“There was a little bit of a freak-out because I had just finished watching ‘That 70’s Show’ and [Prepon] is so good in it,” he recalled. “I had gotten the job 72 hours before. Even when I watch that scene now, I’m just like, ‘Ok, I was terrified.’”

He tried really hard not to show it, though. “My base level was like, you can be freaking out, but keep it cool. Act like you’ve been here.” 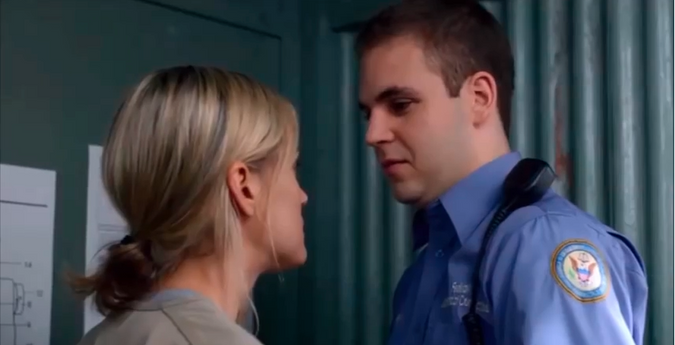 Alan Aisenberg in a scene with Taylor Schilling on “Orange is the New Black.” Image by YouTube

The 23-year-old’s career path can be traced back to a children’s acting class at the Jewish Community Center in Tenafly, NJ. “I got hooked very quickly. There’s a feeling, something in the brain, where you’re like, ‘I want more of that.’ Especially when you’re performing on a stage and you hear the audience laugh.”

By age eight, he was signed by an agent and landed a role in a regional production of “Oliver!” Film roles followed, including the horror flick “Unholy” and the dramedy “It’s Kind of a Funny Story.”

#tbt I like to think we spent 3 months in Louisiana as honorary members of N.W.A. Go see Straight Outta Compton this weekend and stay after the credits for a sneak peek scene from The Longshots 2: Feather’s Boogaloo!

Aisenberg went on to study film at New York University and at 19-years-old co-created Deverge, the production company currently behind the Seeso series “New York’s Funniest” and “Improv Everywhere,” an uber successful prank show based in New York City (if you’ve ever seen a group of people in their underwear on the subway, you know “Improv Everywhere.”)

“It was kind of like, fake it ’til you make it,” he said. “I refused to tell anyone my age. I tried to act like I had been there before. I just listened and went with it until I became confident enough where I could actually do it.”

He paused. “There was a very steep learning curve.”

The same could be said for performing. Although Aisenberg comes across as pleasantly self-confident, he conceded that he appreciates a little reassurance.

“I still need someone saying, ‘That was good.’” he said. “That’s probably the neurotic Jew in me.” 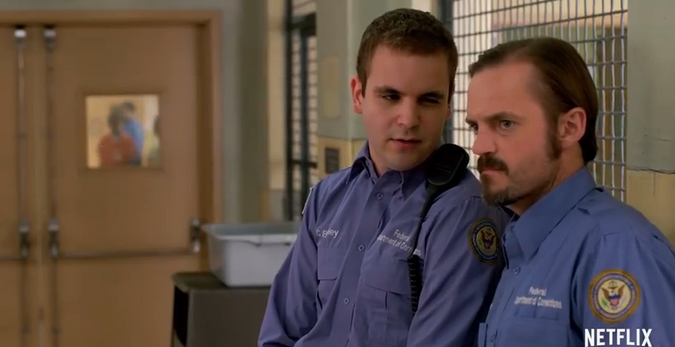 Alan Aisenberg on “Orange is the New Black.” Image by YouTube

When it comes to method, he credited his “Orange is the New Black” cast members for teaching him some basic, valuable lessons. “Know your character, know them.” he said. “Try to understand them and everything else will fall into place.”

He also noted that some of his co-stars pointedly come onto set with only a loose understanding of their lines, to make the scene feel “fresh”— a tactic he has chosen to opt out of.

“I had a friend of mine who was staying with me and he was my abusive line reader. We would wake up in the morning, I would toss the script at him and be like, ‘Hey, we’re going to work on these couple of scenes today.’”

While the Netflix hit is his biggest acting credit to date, Aisenberg said a brief turn playing a football player on an “Inside Amy Schumer”’ sketch earned him the most text messages from friends. 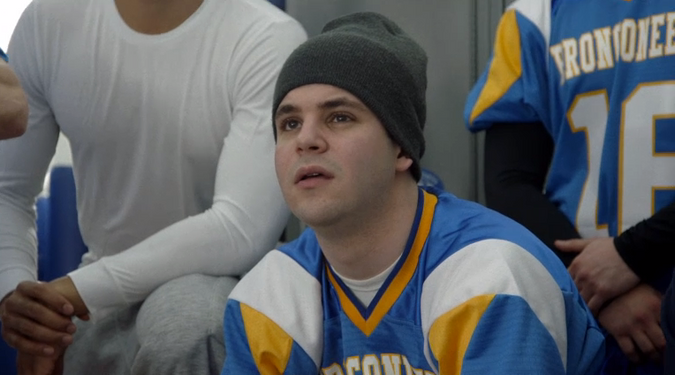 Alan Aisenberg on “Inside Amy Schumer.” Image by YouTube

He called Schumer the “fastest, smartest person in the room.”

“Just to see her give notes, she gets it.” he said. “It is no surprise that she is where she is just by spending two days with her.”

There’s an almost intense enthusiasm in the way that Aisenberg talks about his peers, and he doles out compliments thoughtfully.

“Uzo Aduba is a powerhouse,” he said of his co-star who plays one of the show’s central characters, Suzanne “Crazy Eyes” Warren. “She knows that character and she knows exactly how she’ll relate to anything. She’s not acting, she’s not thinking about the lines, she’s just there with you, reacting.”

He added that the show’s star, Taylor Schilling, is “totally in it, she’s there and gets the character” and that Yael Stone, who plays Lorna, is a master improviser.

“It’s like a big, incestous family over there,” he said, likening the set to a playground.

“We shot a scene this season in the cafeteria that was 50 plus of us and they turned the dorms from the show into our green room. It was absolutely insane, with the entire cast hanging out there on the bunk beds like a big sleepover.”

Less fun, he noted, are the scenes shot at Rockland Children’s Psychiatric Center, an abandoned asylum in Orangeburg, NY. “Rockland is a scary, scary place. There’s certain rooms that are completely untouched and there are locks on the outside, there are paintings on the walls.” Aisenberg said. “It’s very creepy but also magical.”

When I asked him if his parents came to set, he immediately lit up. “They came this year. I’ll show you a picture.” he said, scrolling through his phone until he landed on a snap of himself in his character’s uniform, sandwiched between his mom and dad. He pointed to his own face. “I was grinning, I was so happy to have them there. I love this picture so much.” 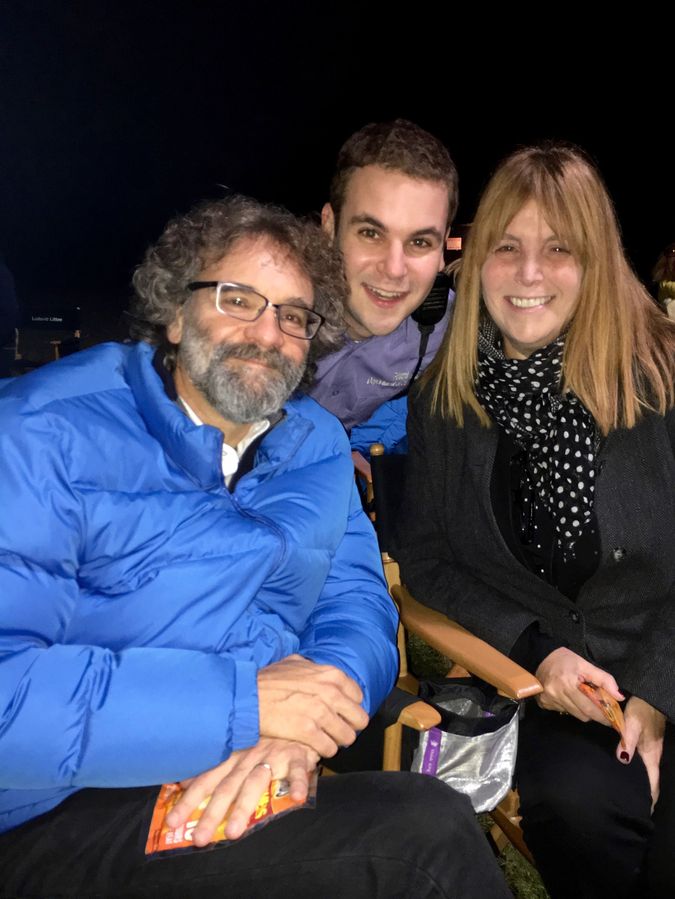 Alan Aisenberg with his parents on the set of “Orange is the New Black.”

Last season of “Orange is the New Black,” Aisenberg was hired for one episode and stayed for seven. This season, though he only hints at it, I suspect he’s around for much more.

“This show has opened me up in ways I didn’t know were possible,” he said. “This season felt a little bit like learning how to play baseball while on the Yankees. It was a huge learning experience.”

There’s a script, of an episode he said will remain nameless, that he got one night while he was at a bar with some friends. He went to a park by himself, read it in its entirety, and cried. “The last three episodes made me think of things I’ve never thought about before, about how everything can change in one second.”

Later, as we walked back along the river, ready to say goodbye, I told him that I planned to take my time with the upcoming season this week. I wasn’t going to binge watch this time around.

He turned to look at me. “That’s not going to happen.”

I decided he was probably right and mentally flushed all my weekend plans down the toilet.