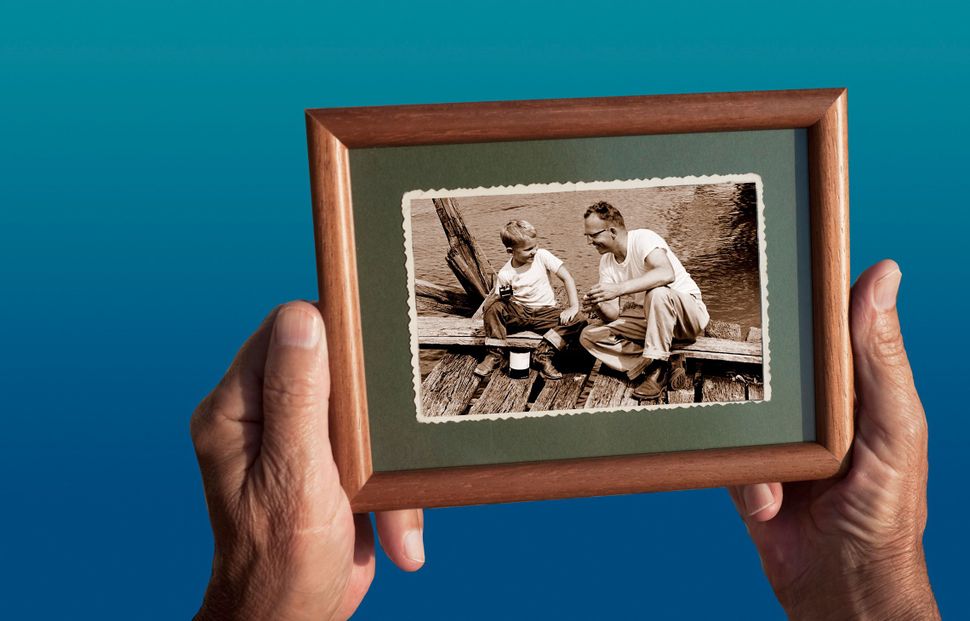 The fellow who came up with the idea of Father’s Day was probably some poor haberdasher hoping to prompt children to buy ties and shirts, if you want to be cynical about it, but also, one hopes, wanting to allow those children to express their appreciation for their Dads. For many of us, however, particularly those of us whose fathers are gone, as mine is, it has become a day of regret for the lack of appreciation we showed when our fathers were alive. I don’t want to get all sentimental or overly guilt-stricken about it, but I was a pretty lousy son, and my father didn’t deserve it. I know I am not alone. I have talked to a lot of men who have made the same confession.

Jewish fathers haven’t had the status of Jewish mothers, those wonderful hens clucking over their brood, poking their beaks into their chicks’ business, and providing overbearing warmth and affection, or is it smothering warmth and affection? We have that stereotype, and we have one of the gentile father: laconic, unemotional, tough, dictatorial. What we don’t have is a comparable stereotype of the Jewish father. When The Forward several years back asked readers to describe their fathers in six words, there seemed to be very little commonality among the submissions, save for “pantsless,” the image of those fathers wandering the house after dinner in their underwear. Still, pantsless does not a stereotype make.

By the same token, it is easy to make affectionate fun of our mothers. Fathers less so. I suppose that is a variation on Tolstoy’s observation that happy families are happy in the same way while each unhappy family is unhappy in its own way. Our Jewish mothers seemed happy. Our fathers in the post-war period didn’t. They were complex, agonized, driven. In the Talmud, the father is the teacher, the guide, the person entrusted to make sure his son is circumcised, marries, and has a trade. In modern America, though, these injunctions are largely anachronistic. For my generation, at least, our fathers, far from guiding us, were barely present. Mine left for his accounting practice at the crack of dawn and didn’t return until dinner and often after, and even then would continue working at a desk in our dank basement until the wee hours. (The sound I always associate with him, our Muzak, is the rhythmic grind of his adding machine as he punched in numbers and rang up the total.) He was something of a ghost. He even worked weekends because that is what kids who grew up in the Depression, as my Dad had, did. I can count the ballgames he took me to on one hand, and the outings we had on the other.

Money was always important to him, as I imagine it was to a lot of men of that generation, especially Jewish men for whom wealth had replaced learning as the measure of status, and who had, to some extent, been emasculated as a result. I remember my father arguing with an old high school friend over whether my Dad’s more expensive Pontiac or the friend’s Chevrolet was the better car. And I remember my Dad announcing one day, when I couldn’t have been more than ten and had absolutely no sense of finances, about how much money he had made that year. I see now that it wasn’t so much boastfulness as pride – pride that he had made it against the odds. And the odds were stacked against him: childhood poverty, only a high school education because he couldn’t afford college, and a disability. My father had been born with a severe hearing deficit – an inheritance from his mother. What little hearing he had, he lost when he was a teenager and a doctor decided to radiate a small benign tumor just above his ear. The radiation shrunk the tumor, but it also killed the nerves.

With his drive for success, it is hard not to think of him as a kind of affable Willy Loman, Arthur Miller’s quintessential universalized American Jewish father rather than a Tevye. Like Loman, my father also desperately sought approval, which was, like the deafness, probably another bequest from my grandmother, a wizened woman with pop bottle glasses and hearing aids whose seeming frailty belied a mean streak. She always favored my father’s brother, Julius, a cantor, over my father, and there was nothing my father could do to appease her. So he sought vindication everywhere else, beaming when someone seemed to like him.

Neither the money lust nor the desperation to be liked particularly endeared him to a teenager growing up in the anti-materialistic, staunchly independence-inducing Sixties, as I did. I am pretty sure that my aversion to money – and my absolute ignorance of finances – as well as my aversion to seeking approval were reactions against my father, which might have been true of the entire countercultural movement. We saw our fathers grovel, and we vowed not to grovel ourselves.

It took me a long time to see how unfair this judgment was to him. Unfortunately, it took me until just before he died. Yes, my father and many Jewish fathers may have been Willy Lomans, trudging through life, trying to do the best they could for their families. But unlike Loman, my Dad didn’t trudge so much as he skipped. Nothing seemed to faze him, and I never saw him beaten down like Miller’s protagonist. My Dad was an enthusiast. He never said an unkind word about anyone. (My mother said all sorts of unkind words about everyone.) He never saw a meal he wouldn’t eat voraciously. Though he wasn’t especially well-read, he never finished a book he didn’t like, or a movie he didn’t enjoy, even though he fell asleep as soon as the lights went down. When the family took our annual one-week vacation driving around the Midwest, the most time we spent with him, he always sought some out-of-the-way landmark or museum or historic site and would kvel over it, while my brother and I remained unimpressed and sullen.

In fact, his enthusiasms, which never diminished throughout his life, were an embarrassment precisely because they were so indiscriminate. He liked everything and everyone. When my friends would come by, he would ask them question after question, not out of any sense of courtesy, but because he really, sincerely cared about what they had to say, and then, of course, would pronounce them “nice” as in “He’s a really nice boy,” his verdict for everyone. I took these sessions to be interrogations, and they were an embarrassment too, though not as embarrassing as when we would go to restaurants, and he would exhibit the same interest in the waiter or waitress while my brother and I sat there squirming, trying to disassociate ourselves from him. Where did they come from?, he asked. Where did they go to school? What were their plans?

My father was oblivious to our embarrassment, as he was oblivious to so much else that might undermine his positivity. (When he would go shopping in Bermuda shorts, I thought I would die if I ran in to anyone I knew.) He was a happy warrior whose happiness often triggered in me, like an emotional Newton’s Law, an equal and opposite reaction that blinded me at the time to just how miraculous it was for him to be so upbeat no matter what. And with the happiness came a blissful determination toward self-improvement. Despite his disability, he eventually became a VP at Sears. Not being able to go to college because he was financially strapped, he finally got his undergraduate degree in his sixties by going to school at night. A miserable athlete, he took golf lessons. An attenuated Jew, he re-learned Hebrew.

None of these achievements impressed me at the time, though all of them should have. They didn’t because I felt that his unrelentingly cheerful obliviousness never seemed to meet any resistance or arise from any soul-searching or required any effort. I just assumed that he plowed ahead by instinct, or, put another way, that he was a man without a tragic dimension. But I will never forget one of those rare days, when I was in my twenties, and my father and I were chatting idly in the car driving somewhere. I think we were talking about writing and how much satisfaction I got from it and how I was hoping I could make it a career as, I said, he was able to make a career out of his passion: accounting. And then, for the only time I can ever recall, my seemingly oblivious father became reflective. “I don’t really like accounting,” he said softly. “I do it because I have to do it to earn a living. I always wanted to be a teacher. I regret I wasn’t able to do that.”

Though it astonished me to hear him say it, I imagine that he was like a lot of fathers, Jewish and otherwise, who did what they had to do, only in his case he compensated for the surrender and hid it by managing to find some thrill in almost everything else. As I said, I never fully appreciated that willful optimism until he suffered a massive stroke and still never let his spirits flag, even though he was confined to a wheelchair. He lived his last years that way, working strenuously at physical therapy and insisting that he would be able to get out of the chair someday and resume golf. He never would. But of course, he knew every detail of his therapists’ lives because, impaired as he was, he subjected them to those same interrogations I had abhorred.

When he died, there was no memorial for him since nearly all his friends were gone. So this will have to suffice, as insufficient as it is. A year or so after his death, I was invited to speak at a synagogue outside Chicago where he had spent virtually his entire life. A woman who had known my parents approached me after my lecture and said simply, “We miss your father. Everyone liked him. He was such a good person.” A good person. He was. And I miss him too, mostly that puppyish joy of his that was so unjudgmental, so tolerant, and, yes, so indiscriminate. So let that be his memorial on this Father’s Day: He was a good person – a person without a single enemy. And let this be a memorial too: As I grow older, I find myself feeling enthusiasms for little, silly things that shouldn’t necessarily elicit them, engaging people I wouldn’t necessarily have engaged, and, despite the challenges and hardships, of life, doing my best to be a happy warrior, like someone I knew and loved.

Get Dad the ultimate Father’s Day gift by donating in his honor to support excellent independent Jewish journalism.