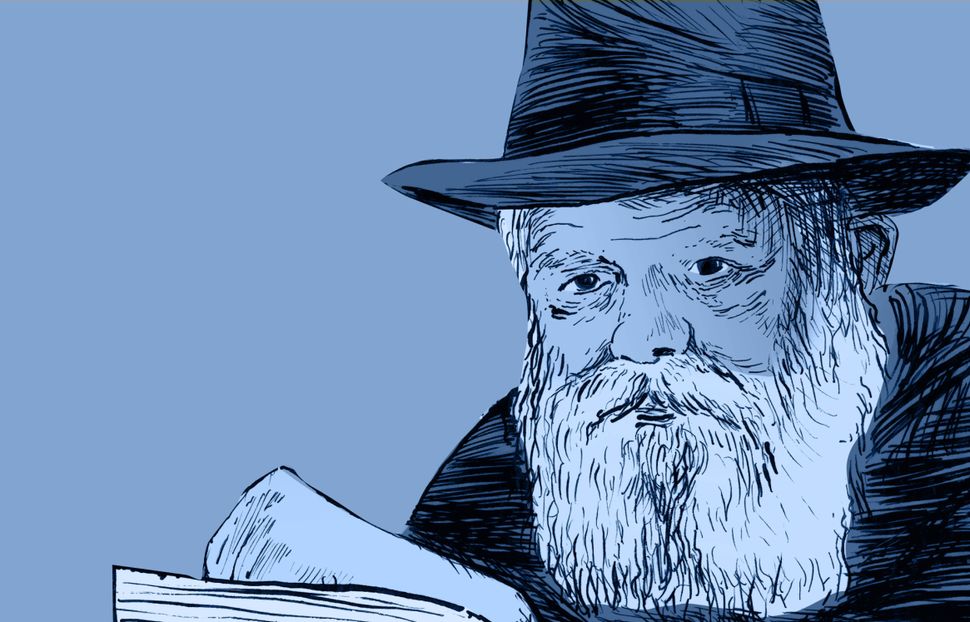 I’m at the New York Public Library on a Monday afternoon for an event honoring the seventh and last Lubavitcher Rebbe, Menachem Mendel Schneerson. I was invited by a friend who works for Chabad, and I’m writing a book about the Rebbe, so naturally I’m curious. News of the gathering has been floating around for weeks, though I haven’t received much information about it. I don’t really know what to expect.

What I wasn’t anticipating is that the event is going to be 12 hours long; that it will feature 75 speakers; that it will be called the “One-to-One Global Forum” and bill itself as “the first in a series of global gatherings.” This sounds a little over-the-top to me. But many of the presenters are serious people (some have even written books that I’ve read), and I hope that it’ll be interesting. Maybe, if I’m lucky, it will even be useful. 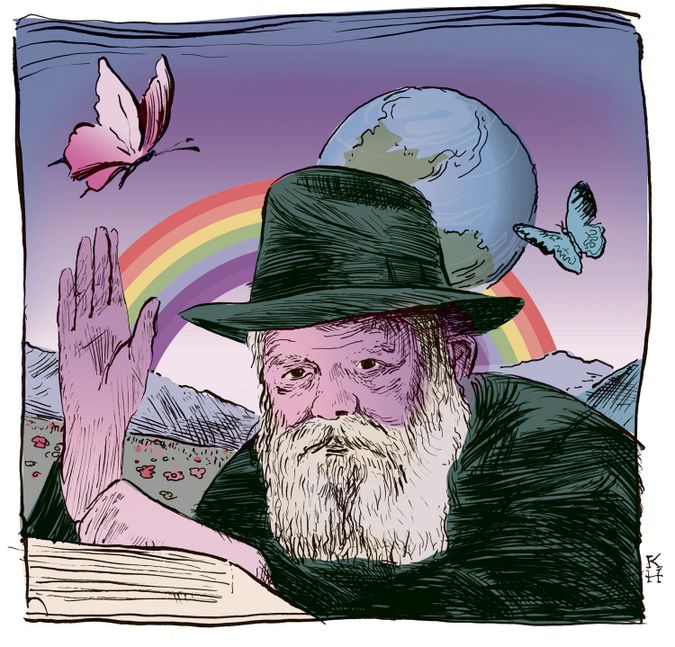 I arrive at the library shortly before 1 p.m., check in, and get myself a badge. The venue is off the library’s 42nd Street Entrance, inside a medium-sized room lit by blue and red spotlights. It feels like there should be a DJ onstage, but instead Mozart tinkles in the background while young Chabadniks in slim-fitting suits and neatly combed beards shuffle around like waiters. The seats are white and cushiony, and make the room look like it’s set up for a wedding. A camera swings overhead, capturing the proceedings for posterity and the live feed.

There are still a few minutes left until things get going, so I settle in and take a look at the text scrolling across a screen behind the stage.

I don’t know what the goal is, and I have my doubts about the impact, but I’m willing to be persuaded. On the right side of the screen stock-images run on a loop: A hand cupping a seedling. Black children reading. The New York City skyline. A woman drinking from a waterfall.

I look back to the text.

“One-to-One is an initiative designed to educate and inspire individuals to act for the betterment of themselves, their communities and the world.”

“The One-to-One Global Forum brings together leading changemakers — from breakthrough scientists and educators to philanthropists and social entrepreneurs.”

“One-to-One believes every individual has the ability and responsibility to make the world a better place.”

Somehow, I feel like I’ve heard those lines before.

The room is less than half full, but the event gets started anyway. The MC is a young actress named Monique Coleman, who stumbles a bit over “Menachem Mendel Schneerson” (who can blame her?) though in a few hours the name will be rolling off her tongue like she went to Beth Rivkah High School. It seems awfully progressive to have a black, non-Jewish woman leading a conversation about the Rebbe, though somehow I doubt she’d be equally welcome to give speeches at a shul in Crown Heights.

An hour later — with 11 hours to go — I decide that I need a break. So far I’ve heard about the thousands of people who are supposedly watching from more than 70 countries; about how small acts can make a big difference, and about how one plus one really equals three.

We’ve heard from Rabbi Joseph Telushkin, the first speaker of the day, whose book, “Rebbe: The Life and Teachings of Menachem M. Schneerson” seems to be at least a partial impetus for the event. “The Rebbe had a universal vision, but he never lost sight of the individual,” Telushkin tells us.

A few chairs down from me a man with an unkempt gray beard rustles through a collection of shopping bags. Did he pay full price to be here, I wonder? I was invited to attend for free, but regular tickets are $250. For that money there are no refreshments, and with the low lighting, comfy chair and lack of coffee, I’m starting to fall asleep.

When I come back I find that I’ve missed hearing David Dinkins, the former mayor of New York City, in conversation with Ester Fuchs, a professor of political science at Columbia University. I’m sorry about that, although later I’m able to watch the recording and hear him tell his story about meeting the Rebbe, among other reminiscences. Instead of Dinkins I find a Slava Rubin, a founder of Indiegogo, talking about the crowdfunding revolution.

As Rubin talks about how, thanks to crowdfunding, we now have chewable ice in our refrigerators and gluten-free frozen desserts at Whole Foods, I try to figure out why I find this event so off-putting.

Maybe it’s because, despite the talk of creating a “groundswell of social change,” all I see is a rapid succession of speakers with little in common among them.

Maybe it’s because of the platitudes and clichés.

Maybe it’s because I think that vague talk about “making the world a better place” is just a way to avoid talking about oppression and inequality.

Maybe it’s because several hours in I’ve heard a lot about the Rebbe, but not a word about wealth inequality, women’s reproductive rights, or the murder of 49 LGBT people at a club in Orlando.

The organizers seem to have gone to great lengths to make it the forum inclusive, but what kind of social change are we talking about?

But as the day wears on, my skepticism becomes tempered. To give credit where it’s due: In spite of its terrible marketing copy, the One-to-One Global Forum has attracted many impressive speakers.

I hear professors William Parsons and Jonathan Garb talk about the culture of the therapeutic and the relationship between twentieth century religion and psychology.

I hear MIT neuroscientist Ed Boyden talks about his quest to cure blindness and, eventually, all human disease.

I hear Ruth Messinger, president of American Jewish World Service, talk about the plight of refugees and the disenfranchisement and deportation of thousands of Dominicans of Haitian descent.

But I am still wondering: What is the purpose of this event?

One of the speakers I came to hear is Shaul Magid, a professor of Jewish Studies at Indiana University. And it is Magid who, perhaps unwittingly, manages to explain what seems to be going on.

In the 1980s the Lubavitcher Rebbe began a campaign to promote the observance of the seven Noahide laws — those biblical commandments believed to be universally applicable — among the population at large. It was a virtually unprecedented effort; Jews have traditionally eschewed proselytizing to the gentile world. As Magid puts it, the campaign was a bold attempt to get “the non-Jewish world to assimilate into the Jewish one.” That is, to take a Jewish — and in this case, Lubavitch — value structure and make it universally accepted.

For those of us in the Jewish community, that sounds pretty familiar. We’re used to Chabad’s efforts to assimilate the rest of the Jewish world into itself — to accept Chabad’s version of Judaism, and the leadership of their deceased Rebbe, as a universal standard. And while they are far from totally successful, their massive outreach efforts have produced many successes. The fact that their Rebbe is usually known simply as “The Rebbe” is one of them. That so many thinkers, Jews and non-Jews, will pay homage to him is another. The “One-to-One Global Forum,” it comes to feel, is mostly about turning the Lubavitcher Rebbe into a universal figure.

But even universality has its limits. As the evening wears on, I become less and less interested in hearing speakers talk about a leader whose religious and political views were a lot more controversial than anyone will let on. I don’t hear too many people talk about his opposition to the Israeli-Arab peace process, or his support for prayer in public schools, or the messianism that still grips large portions of the Lubavitch world. Worse yet, in identifying Schneerson with the simple cliché of “making the world a better place,” his own followers are robbing him of everything that makes him interesting. Would it make any difference if we were talking about the Dalai Lama or the Maharishi or the Pope?

Maybe I’m just overly sensitive, or overly cynical. But when I leave the One-to-One Global Forum, well short of the 12-hour mark, I am still waiting for inspiration.

Ezra Glinter is the critic-at-large for the Forward, and the editor of “Have I Got a Story For You: More Than a Century of Fiction From the Forward.” He is currently writing a biography of the Lubavitcher Rebbe for Yale University Press.