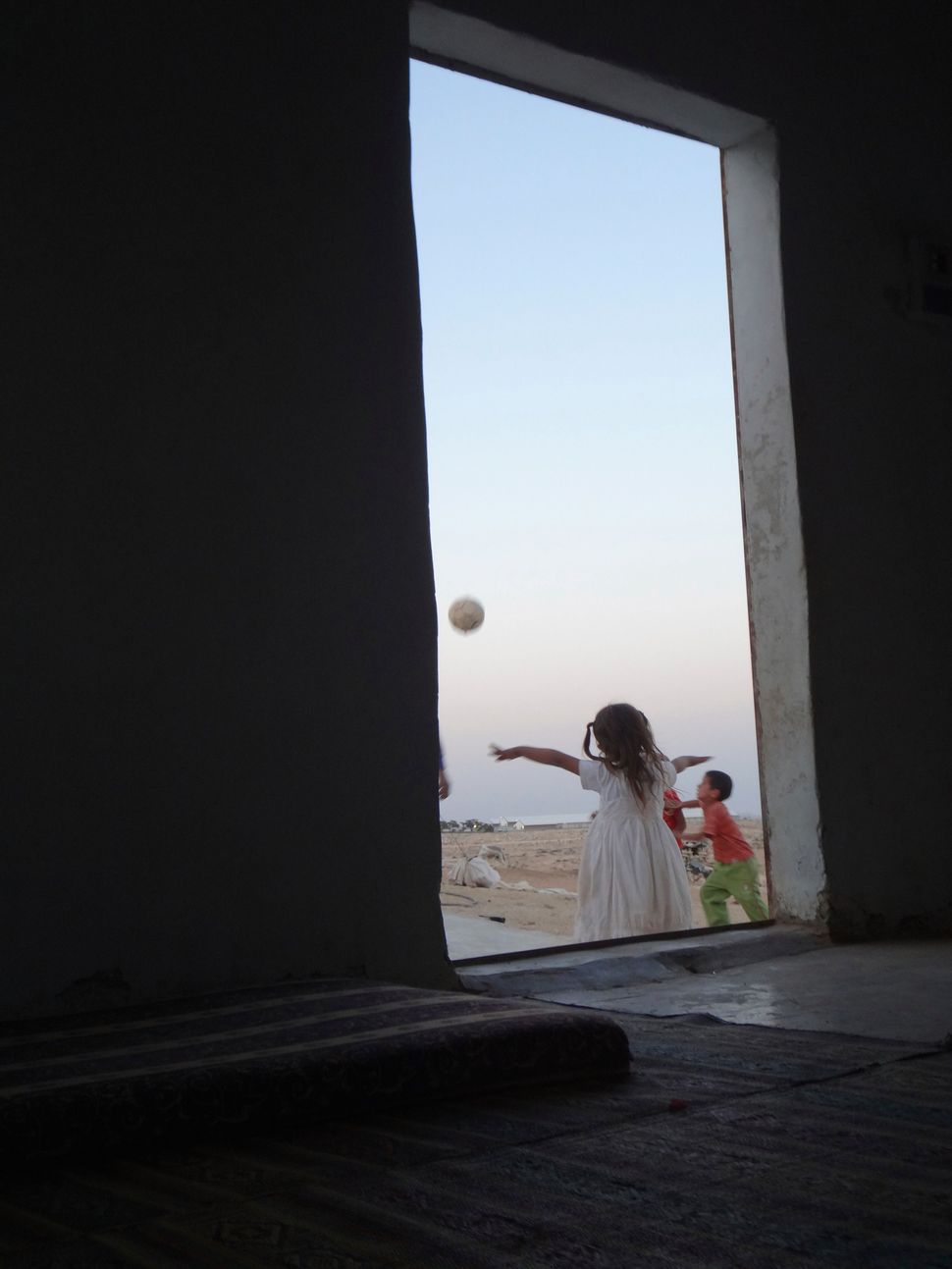 Simple Pleasures: The daughter of artist Eid Suleiman al-Hathalin playing ball on her birthday. Image by Courtesy of Ben Ehrenreich 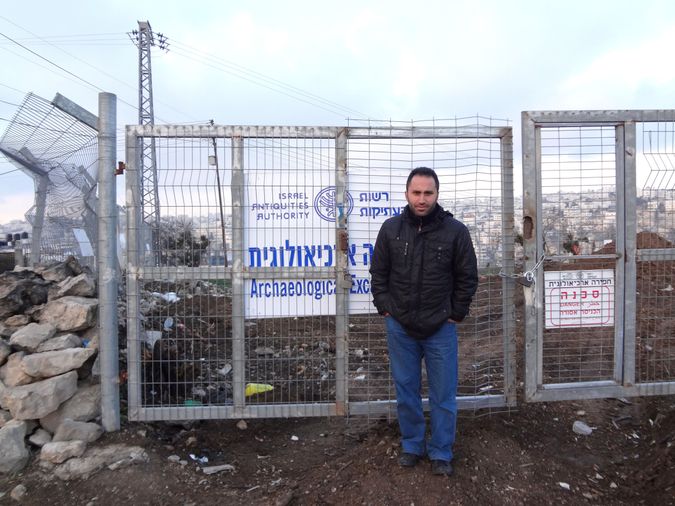 Image by Courtesy of Ben Ehrenreich

In the classic American film noir “Out of the Past,” the wayward mob mistress and the private eye hired to drag her back home are, inevitably, flirting in a casino in Mexico. “Is there a way to win,” she asks, sultry and musical, pretending that she’s talking about the gambling tables. “No,” the doomed chump answers, “but there is a way to lose more slowly.” It’s hard not to read “The Way to the Spring,” journalist Ben Ehrenreich’s deeply reported new chronicle of Palestinian life and resistance in the West Bank and Hebron, with those dark words in mind. The men and women he grows close to lose almost every battle they fight — beaten down by Israel’s infinitely superior military force and the expansion of Jewish settlers operating with apparent government approval. And despite or, he might argue, because of his Jewish heritage, Ehrenreich makes no bones about siding with the losers.

The book has already been both lauded for its impassioned writing and criticized for the author’s explicit sympathy for his subjects (sometimes within the same review). Sheerly Avni spoke with Ehrenreich by phone from his home in Los Angeles, just as he was packing for a trip to the Palestinian Festival of Literature.

Sheerly Avni: You lived in the West Bank and spent some time there on and off, for about three years. How much did the amount of time you spent there impact your understanding of events?

Ben Ehrenreich: I know a lot of Americans and Europeans who visit the West Bank either as reporters or with delegations and return home filled with optimism and hope because they’ve met all these great and inspiring people who are engaged in inspiring acts of resistance. But actually living in the West Bank gives you a very different sense of the duration of things, and specifically of these awful cycles of hope and despair — usually heavy on the despair.

You mention in the book a particularly surreal moment, seeing graffiti on a wall in Hebron.

That was the first time I went to Hebron, in 2011. It was something I couldn’t forget. I was given a very quick and impromptu tour — a local kid grabbed me in the market and insisted on taking me around and showing me the sights. As we were walking on a path I’d later come to know very well — it was across the street from the Israeli settlement of Beit Hadassah — I saw the words “Gas the Arabs” spray-painted in English on a wall. I don’t think I need to explain why that was so upsetting.

Because you are Jewish? Or rather, do you consider yourself Jewish?

My father is Jewish, my mother is not. To an anti-Semite I am a Jew, to the Orthodox I’m not. I’m not particularly interested in settling that question for them, except to say that I did grow up with a deep sense of what it meant to be Jewish, and of the responsibilities that heritage carries with it. My father’s family was entirely secular — his parents were communists — but they had a strong and painful sense of themselves as part of a people who had been hunted and persecuted for centuries. What that gave us, I was taught, was not any special rights or entitlements but an obligation that extended to all persecuted peoples and to all human beings, and a powerful sense of the importance of pursuing justice, not only on behalf of Jews but on behalf of all people everywhere. The State of Israel increasingly claims to be acting in the name of all Jews all over the world. This allows people to argue that any criticism of Israel counts as anti-Semitism, which I find both cynical and extremely dangerous. 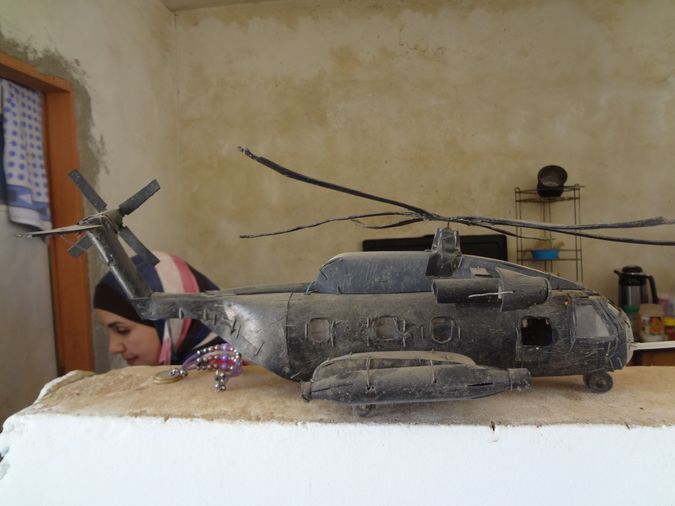 The Way to the Spring: A sculpture by artist Eid Suleiman al-Hathalin taken in his home in Umm al-Kheir, in the South Hebron Hills. Image by Courtesy of Ben Ehrenreich

The question of whether stone throwing counts as violence becomes much less impressive if you spend any time at these protests. The difference between 16-year-old boys throwing stones and soldiers in body armor shooting tear gas canisters, shooting rubber-coated steel bullets, shooting live ammunition is so radical that the question really just disappears when you’re there on the ground.

Nonetheless, it is a stumbling block, especially for Americans.

I do know, and it’s certainly been pointed out to me, that people have been killed by stonethrowing and people have been injured by stones. Of course stones hurt if you’re hit by them. But I did contact the [Israel Defense Forces], and they were able to confirm they have no records at all of any soldiers ever being killed in a stone-throwing incident. I don’t think it’s an exaggeration to say that there have been millions of stones thrown at Israeli soldiers since the first intifada. Yet not a single Israeli soldier has been killed by one. Many hundreds of Palestinians have been killed at demonstrations by Israeli bullets, but it never occurs to us to ask if the Israeli cause wouldn’t be better served if Israel disowned all forms of violence.

You also point to groups — like Youth Against Settlements, in Hebron, which forbids stone-throwing.

They have a strict policy of not throwing stones. And it’s not on moral grounds. Their belief is that it just doesn’t work. In Hebron, people have been throwing stones for decades and it hasn’t made the slightest bit of difference. So Youth Against Settlements resists in a different way, with actions like trying to restore abandoned houses so that Palestinians can live in them without settlers taking over. Yet even simple acts like this are met with military violence, and people are dragged out, beaten and arrested, simply for attempting to rebuild their own homes.

So even clearly nonviolent resistance meets with violent oppression?

Yes, consistently. The last time I was in Nabi Saleh, soldiers began firing high-velocity tear gas canisters at villagers who were simply sitting on a hillside. No one was surprised. This wasn’t strange or exceptional. It was completely routine. There is a point in the book where I ask, “Is there no form of Palestinian resistance so innocuous that it wouldn’t be condemned?” 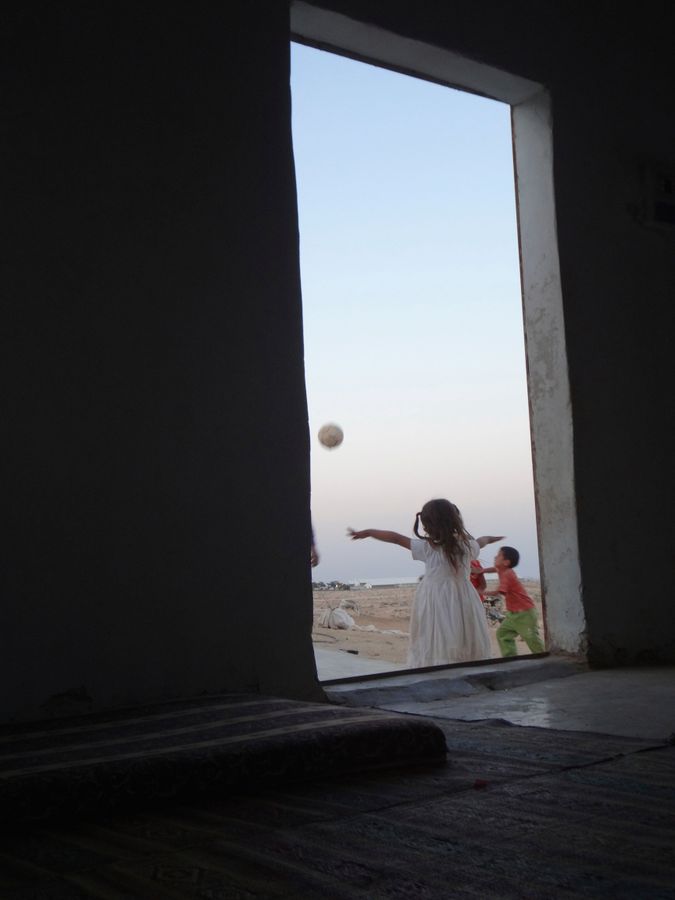 Simple Pleasures: The daughter of artist Eid Suleiman al-Hathalin playing ball on her birthday. Image by Courtesy of Ben Ehrenreich

It was very painful to see all of the hatred spilling out in the streets, and to understand retroactively that it had been there all along.

You analyze the strategies and structures of the occupation, from several different angles, including financing of construction projects, the relationship between the government and the military and, finally, an often irrational hatred of Palestinians both in Israel and in the territories. But you also speak of a deep hatred of Palestinians among Israelis, one that is harder to pin down.

I spent a lot of time while I was there and afterwards trying to understand the mechanics of the occupation. I began to think of it more and more as what in the book I call the “humiliation machine,” a giant mechanism with a dizzying array of different gears which all work together for a single purpose. It isn’t just about taking land, and certainly not about anything that it would make sense to call “security,” but about inducing despair in an entire population in order to render them docile.

What I saw in that summer of 2014 wasn’t rational. I don’t just mean the bombing of Gaza. There were mobs of Israeli youth walking through Jerusalem night after night, shouting “Death to Arabs” and looking for Palestinians to beat up. It rarely made the news, but they often found them. I don’t think human beings are ultimately rational creatures, and the things that push us hardest are not the things that we’re conscious of. It was very painful to see that, to see all of the hatred spilling out in the streets that summer, and to understand retroactively that it had been there all along.

In the book, you often refer to writers and thinkers who have nothing to do with the conflict: Frantz Fanon, Aime Cesaire, many science fiction writers.

I was shocked by how accurately writers like Cesaire and Fanon, working within entirely different contexts, diagnosed mass psychology in ways that apply to the State of Israel. They may have been writing from the Caribbean or North Africa, but they understood colonialism and understood the ways in which oppression distorts and deforms the soul and the conscience of the oppressor as well as the oppressed. And I think it was that deformation that was on display in such an ugly fashion in the summer of 2014. And it’s still on display quite regularly as Israel moves farther and farther to the right. You can’t exert oppressive violence against another population for decades without it coming back at you.

Where do we, as U.S. Jews, fit into this schema?

As Americans, both Jewish and non-Jewish, we tend to shake our heads and say, “Oh, what can we do? They’re just going to keep killing each other there.” But the killing mainly occurs in one direction, and it’s mainly sponsored by the United States. The U.S. gives more than $3 billion a year in military aid to Israel, which is more than we give to any other country. In total we have given more in military aid to Israel than to any other nation in our history. So there is a very direct sense in which Americans are not at all powerless to affect what happens there.

Imagine for a minute that you were given power to actually change things. What kinds of policies would you suggest?

I don’t see my role in the world as being to formulate policy or even suggest solutions. What I can do is describe the realities I observe and try to do so accurately and with empathy. I think one of the biggest problems of American political psychology, and perhaps American psychology in general, is that we always want to immediately fix stuff. We don’t want to take the trouble to listen. One of the reasons I wrote this book is that very few Americans have had an opportunity to understand or even hear any Palestinian perspectives on the situation, which means we understand less than half of it. Until that changes, it’s certainly premature for us to try to solve anything. That said, we don’t need to do something new. We simply need to stop doing what we’re already doing. In other words, we don’t need new initiatives, but we do need to stop funding this occupation, and the massive amounts of violence and oppression that go with it.