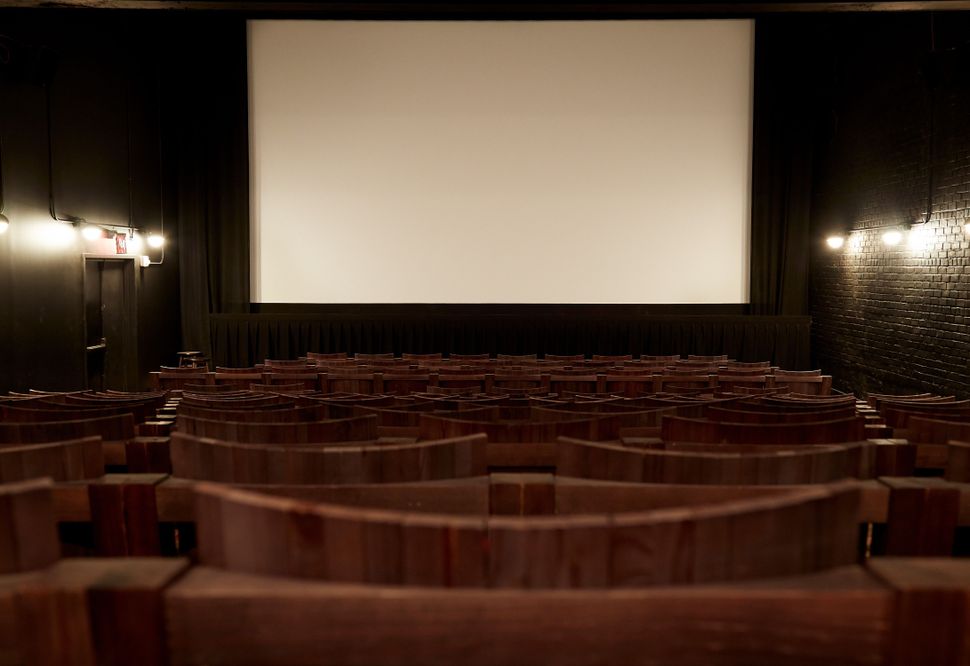 I’ve always loved going to the movies. I often go when I feel lonely or inspired. I love the bustle and the camaraderie, the unspoken connections that form when you sit next to complete strangers and experience the same emotions. I like picking the perfect seat. I like the trailers. I like eavesdropping on people as I exit the theater, and discussing the film over dinner or drinks. Often, especially in New York, I scout out the neighborhood theaters because they feel personal.

On a recent Thursday night I ventured to the deserted, tail end of Ludlow Street on Manhattan’s Lower East Side to visit Metrograph, a movie theater that opened in February. Metrograph occupies a former food storage warehouse, in a rectangular brick building squeezed beside a Chinese funeral home. The street is quiet at night and, though only a few blocks from the packed bars on Orchard Street, feels isolated. That is, until you enter.

The night I visited, to see a new film called “The Fits,” the audience consisted of women in straw hats and lace-up boots. Men wore patterned button-downs and gelled their hair. Couples laughed and drank cocktails in the softly lit lounge.

“Guys, this is crazy,” one man said to his friends, gazing up at the goodies.

If the lobby gives off a downtown hipster vibe with its minimalistic design and echoing concrete floors, the upstairs commissary feels like 1950s Hollywood, where palm trees shade leather and velvet couches. The whitewashed walls and newly installed skylight create an airy space. A mirror above the hostess station is stained auburn to look antique, and a gold-gilded bar cart displays yellowed Hollywood magazines. The restaurant serves upscale food that ritzy stars might once have ordered: steak frites and Waldorf salad. 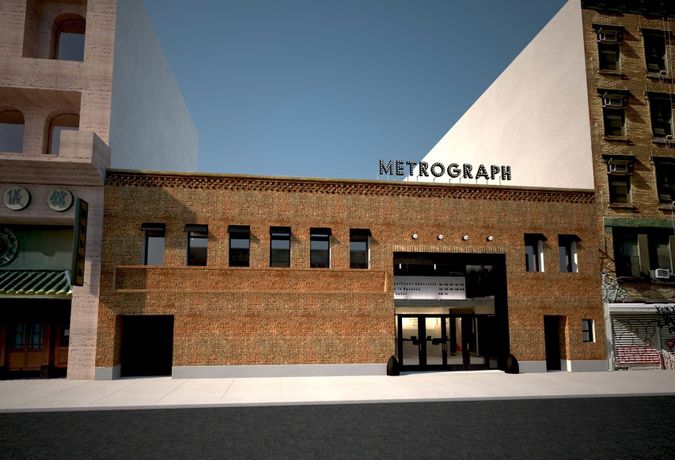 **New Theater, Old Style:” The Metrograph is located on Ludlow Street on the Lower East Side of Manhattan. Image by Flickr

“There are elements that are playing on the past, but it’s very much in the present,” Alexander Olch said one slow afternoon in the commissary, when the stools were still stacked on the bar and the theater was dark. Olch founded and designed Metrograph, overseeing everything from the velvet-crushed theater seats to construction of the ties for the female staff’s uniforms. He owns a tie shop around the corner.

Olch continued, saying that, though Metrograph radiates a Los Angeles feel, we “are very much in a warehouse on the Lower East Side.” He sat beside Jacob Perlin, Metrograph’s artistic director, who was momentarily exasperated that he had forgotten the black-and-white cookies he’d planned to bring.

As youngsters, both Perlin and Olch sought out and relished the now long-forgotten movie theaters hidden around New York City. Perlin saw Martin Scorsese’s “The Last Temptation of Christ” at Cinema 3, a theater beneath the Plaza hotel that shuttered in 1997. Olch, too, remembers the dark den and plush seats well. They speak fondly of the Paris Theatre on 58th Street, which at almost 70 still triumphs as an intimate art house.

Manhattan movie houses once thrived, but when television lured families to the couch, starting in the 1980s, the theaters suffered.

A Gothamist story from 2013 sketched the fall of the city’s cinemas over the past eight decades. A Google map showing New York cinemas circa 1940 is overwhelmed with red pins; too many to count, as if one Googled today “nail salons in Manhattan.” By 2010, only 19 red pins dot the island. This year, The Ziegfeld Theater closed after showing “Star Wars: The Force Awakens.”

“My dad snuck me into the ‘Lawrence of Arabia’ revival at the Ziegfeld Theatre when I was 12. Crowds around the block, the massive room, the movie — all the magic I felt that afternoon awakened a passion in me,” Olch told Indiewire. He also directed a film called “The Windmill Movie,” which debuted at the Ziegfeld in 2008.

“It wasn’t the biggest room in town, that was the Astor Plaza. But it was always the place that whatever you saw felt special by virtue of it being there,” Perlin wrote in the article. 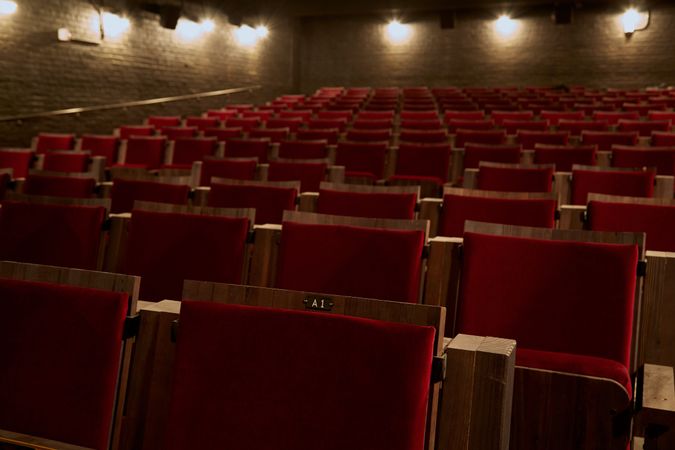 Cinema City: Alexander Olch and Jacob Perlin aim to revive the glamour and romance that was once a routine element of moviegoing. Image by Flickr

After seeing Metrograph, it’s no surprise that Perlin and Olch speak dearly of Manhattan’s bygone theaters. Their new project aims to revive the glamour and romance that was once a routine element of movie-going.

The two men met back in 2008, when Olch released “The Windmill Movie” through The Film Desk, a distribution company that Perlin runs. Olch turned 200 hours of footage that his teacher and filmmaker, Richard P. Rogers, left behind when he died in 2001 into an autobiography with the help of Rogers’s wife and playwright and actor Wallace Shawn.

Olch and Perlin began a friendship. They set off across America to find small-town movie theaters for viewing Olch’s documentary. Neither can say exactly how many films they have seen together, but Perlin boasts he has probably seen over 2,000 features just in any given Manhattan theater.

By the time they hit Omaha, Nebraska, though, they had grown tired of Olch’s film and instead popped into the next room at the indie Film Streams cinema, run by Rachel Jacobson. It’s a clean brick building that sits on a corner. Naked bulbs, much like the ones used to line dressing room mirrors, rim its marquee. Metrograph’s lobby is also decorated with such lights.

The experience at Film Streams overwhelmed Perlin and Olch. They felt at ease and realized they wanted to bring a comfortable, luxurious movie-going experience to the city. The cinemas from the Golden Age of Hollywood, specifically the 1920s to the ’50s, inspired both the design and function of Metrograph. From a practical standpoint, these expansive spaces catered to anyone utilizing them: the clientele, the movie stars and the workers. Inside were mailrooms and barbershops. Ethan Oberman, the CEO of Metrograph and Olch’s college friend, likened them to Google’s campus, a one-stop-shop that even includes day care so employees can maximize their time at work. I can’t decide whether that’s something to brag about.

Pinning down the theater’s location, though, in a corner of New York that now blurs immigrant enclaves, happened out of sheer coincidence. For four years they looked at buildings around Manhattan, but the spaces were too small. Metrograph is 5,400-square feet. Both Perlin and Olch feel at home with the Jewish history of their neighborhood.Perlin’s grandmother spoke Yiddish; Olch lives up the block; both Perlin’s and Olchin’s families are longtime Forward subscribers

“We’re across the street from the old Loew’s Canal, the behemoth temple of cinema that’s been closed for so long,” Perlin said.

When that theater opened in 1926, it was the largest in the city, at 2,000 seats, and was a mecca for filmgoers, particularly immigrants and fanatics.

Actor Jerry Stiller told the New York Post in 2012, “We used to go on Saturday morning at the Loew’s Canal. At 9 in the morning, they’d show things like the “Fitzpatrick Traveltalks,” cartoons and serials like ‘Flash Gordon.’ By the time you got to 10:30, they’d get to the double-header, two pictures in a row. What happened was, your mother or father would drop you off at 9, and they didn’t have to pick you up until 3. That’s where we got our education.”

It closed in the ’50s and remains a sunken cave beneath the electronic shops.

Efforts to revitalize the dinner and a movie concept already exist. In fact, many of them typically play indie films, like Metrograph does, though Metrograph, which changes its box office offerings weekly. The theater also features older films like “Magic Mike” on 33 mm and Brian De Palma marathons, in addition to ones fresh from the festivals.

In Brooklyn there is Nitehawk, in Williamsburg, which serves food. Cinemas 1, 2 and 3 by Bloomingdale’s on Manhattan’s East Side recently upgraded to include reclining chairs. The Angelika — a personal favorite — sells Melt ice cream sandwiches and other unique treats.

Ticket prices are $15 ($12 for matinees), and there is something to be said for the deluxe experience. When I visit my home in Portland, Oregon, I like to see movies at Living Room Theaters, which serves Oregon pinot noir and local truffles. I like the cushioned chairs that can fit two of me, and the wide-planked armrests that hold a tray of food. It has become such a popular nightspot that when we saw “The Big Short” over the holidays, we had to book our seats several days in advance. My parents’ newest complaint, though, is that fellow moviegoers treat it exactly like their living room, as the name suggests. Someone once crunched too loudly, and ever since, they claim the place has since gone downhill.

Metrograph is more sophisticated and chic than these other theaters. On the night I visited, a woman sat on a barstool next to me in the lobby. She took a salad out of her bag and ate it while I scooped up fried rice takeout. We were both seeing “The Fits” at 9:30 and had never been to Metrograph before.

“It’s uh… very sassy,” she said, rolling her eyes up toward the restaurant.

After I ate, I killed the next 20 minutes browsing the bookshop, located in a nook upstairs. I flipped through “Grey Gardens” and “John Huston” by Lillian Ross. Then I saw a title pertaining to Hitchcock and grabbed it. David Thomson’s first paragraph in “The Moment of Psycho” is an ode to cinemas.

“Come in and forget your sorrows and the world’s hard times,” he writes. I became acutely aware of the clank of silverware behind me, of the chatting hostesses.

Someone in the bookstore interrupted my thoughts. I looked at my phone and read 9:28. It was the first time I had ever been a half-hour early to a cinema and still almost missed the film, which at Metrograph starts right on time.

When I left the theater at around 11 p.m., the restaurant crowd was still going strong. I could hear their revelry down the block.

On the walk home, I pondered the film, and realized the commissary would have been the perfect place to grab a drink and indulge my post-movie reflections. That is, after all, my favorite reason for going to the theater. It wasn’t until later that I understood this to mean I had subconsciously designated Metrograph as the one-stop-shop cinema it strives to be. Though if Perlin had his way, it would also house a post office.

Britta Lokting is the Forward’s culture fellow Contact her at lokting@forward.com