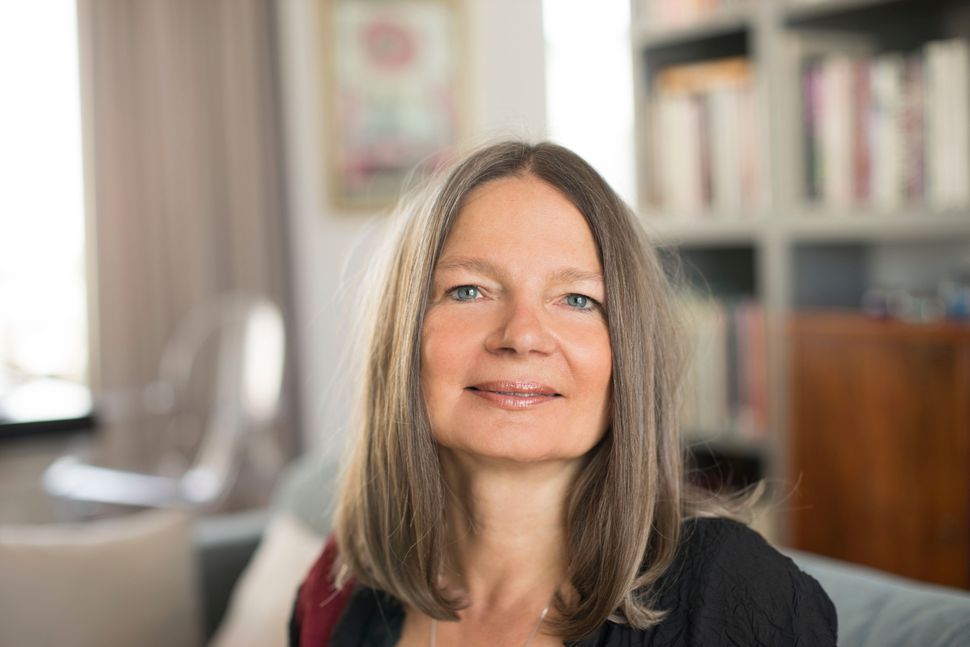 Image by Courtesy of Knopf

‘Truth is safer, always.” The Polish poet, biographer, and memoirist Agata Tuszyńska sat across from me in the living room of an expensively furnished apartment on Manhattan’s Upper East Side, drinking black tea. It was a warm Monday morning, and Tuszyńska, in town to promote “A Family History of Fear” — a new English translation of her 2004 Polish memoir — wore a loose wine-colored silk top, a chunky silver necklace and square, thick-framed tortoiseshell glasses.

When Tuszyńska says that truth is safer, she knows from experience. “A Family History of Fear” might just as easily be titled “A Family History of Selective Truth.” The memoir was inspired by the author’s effort to come to terms with her Jewish identity — one that she, born with light hair and blue eyes to a Jewish mother and non-Jewish father, didn’t know about until she was 19. The most significant of the omissions Tuszyńska considers is, of course, the way her mother hid her Jewish background; others include relatives who choose to hide or reject their Jewishness, a father who regularly unleashed anti-Semitic sentiments without considering their impact on his Jewish daughter and ex-wife, and the careful cultural forgetfulness, in Poland, of the country’s contentious history with Jews, Holocaust included.

“When my mother told me that she’s Jewish,” Tuszyńska told me, “I decided to conceal this information. She was afraid, and I was kind of afraid as well. I inherited her fear.”

Tuszyńska kept the truth hidden for years, motivated in part by her mother’s sense of secrecy and in part by her father’s anti-Semitism. Lacking an outlet through which to explore this new, taboo part of her background, she turned to Polish Jewish literature. She became fascinated with Isaac Bashevis Singer, and published an impressionistic biography of the writer in 1994.

The process of writing that book took her to Israel for the first time, in 1992. That trip was the start of a deep connection to the country but also a stark reminder for Tuszyńska of her confusion over her own identity.

“I knew already that I am Jewish, but I couldn’t talk about it,” she said. “Of course the first question they ask you in Israel [is] are you Jewish? So I said no. They started telling me horrible things about Poles during the war. And I couldn’t stand it because it was against my Polish side, but on the other hand I knew all about it.”

Most of the tension in “A Family History of Fear” stems from the competing allures of its author’s disparate identities. Tuszyńska feels the tension between her father and mother’s respectively working-class and upper-class backgrounds. She describes her horror at the treatment Jews received from their Polish neighbors during the Holocaust; a consistent theme is the author’s persistent desire to know more about her own history, despite her initial revulsion, and her need to incorporate it into her identity.

“The whole book I wrote on this side of the ocean,” she said, “either in New York or Canada, because [in Poland] I felt like my mother and my father were sitting on my shoulders and watching me.”

It was not only their gaze that bestowed pressure; it was that the gaze, for Tuszyńska, represented her entire country. Writing “A Family History of Fear” meant publicly exposing the defining secret of not only her existence, but also that of much of her family.

“I didn’t want to hurt my family,” said Tuszyńska. My mother wasn’t very happy about it, because for her and for the family of survivors — not [many] survived, but they survived — it was like betrayal, it was like giving them out. They were in hiding in Poland after the war, and I publish a book which can be bought in every single bookstore in Poland.”

Any intimate family investigation of this nature runs the risk, on paper, of becoming overly self-involved. Tuszyńska’s writing is cyclical; she introduces key events and ideas early on, passing over them again with increasing depth and intensity. That technique, dreamlike in effect, is often successful. It is at its best in Tuszyńska’s exploration of the Warsaw ghetto, which she circles, half-shy and half-fascinated, exploring what it meant to the members of her family who lived on both sides of the ghetto wall.

“I know where the ghetto wall was,” Tuszyńska said. “I was trying to write a book which I never finished about the wall of the Warsaw ghetto. I was gathering these stories from both sides of the wall. Maybe [this] is the sign that I am Jewish.” She paused. “Or maybe it’s a sign that I’m obsessed with the past and history and memory.”

At other points, Tuszyńska’s ruminations are less compelling. This is true in the often muddled language that heralds Tuszyńska’s frequent returns to the mystery and anguish surrounding her parents’ divorce. The event was a cataclysmic disruption of her childhood, and in many ways her parents’ separation prevented her from reconciling the parts of her identity each bestowed. Rather than accentuating the complex effects of that event, the hushed drama with which Tuszyńska and her translator Charles Ruas approach it dulls its impact.

Luckily, “A Family History of Fear” is a book in which missteps are rare. The murkiness of Tuszyńska’s writing at the points when she seems least sure of how to tell her story is a plaintive evocation of the difficulty of making sense of a background like her own, shared by so many. It’s a book, at least in English, that’s far from perfect. In its own confusion, though, it’s perfectly suited to its impetus: the need to speak after decades of silence.

In writing “A Family History of Fear,” Tuszyńska told me, she felt driven by an urgency she found almost inexplicable.

“I was sure that I have to write about it, because I couldn’t live otherwise,” she said. “If you have a secret it will open finally one day or another, and you don’t have control over it if you don’t reveal it yourself. And then the damage is horrible.”