Ron Suskind’s Family Story of Autism Will Make You Weep 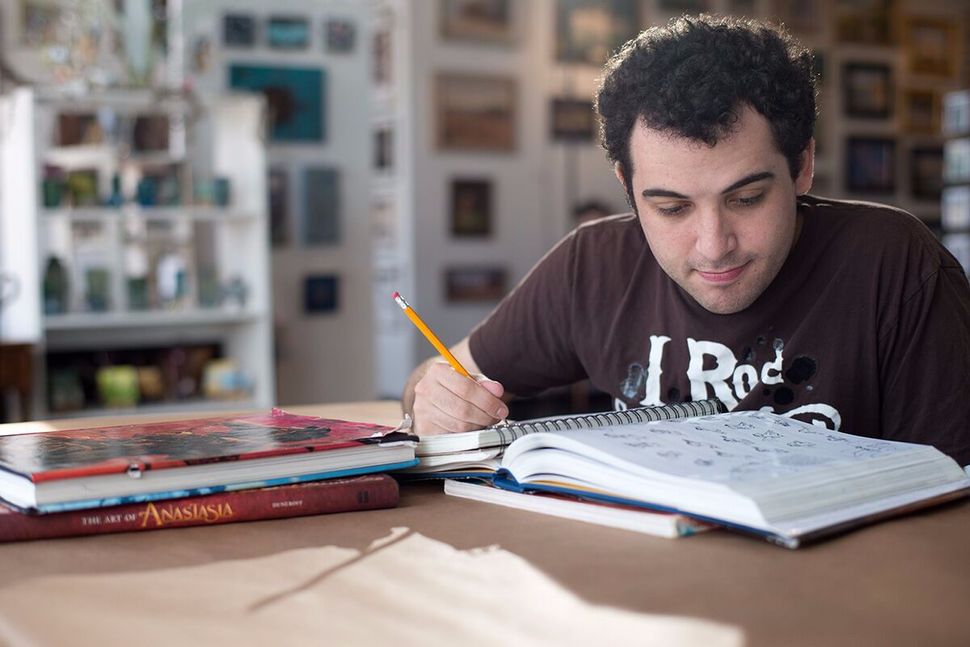 A little over twenty years ago, Ron Suskind seemed to be in a very good place. He looked forward to going to work every day. A reporter on the rise for the Wall Street Journal, he’d just been promoted to senior national affairs writer. Reporting wasn’t “just what I did, but it was an expression of who I am,” he said in a telephone interview with The Forward.

And he enjoyed coming home, too. Happily married with two sons, he was living pretty much the perfect life.

Then his younger son, Owen, disappeared. Not kidnapped disappeared or runaway disappeared, but disappeared inside himself. When he was almost three, this once seemingly normal, joyous child, stopped speaking, stopped sleeping and lost motor skills.

What happened to Owen and how the family responded became the subject of a Suskind book, “Life Animated,” and a documentary of the same name, which opened in New York July 1 and will expand elsewhere. The film is both heart wrenching and heart warming, and — spoiler alert — there is a happy ending. Or at least a denouement as happy as these things can get.

“We were in a daze really,” Suskind said. “We wondered what happened to him. We” — Ron and his wife Cornelia and older brother Walter — “just looked at each other. Could he have banged his head when we weren’t looking? Could he have ingested something toxic? It didn’t make any sense. You don’t grow backwards.”

Ultimately, Owen was diagnosed with regressive autism. The Suskinds were told it was likely that Owen would never speak again and that their lives would never be the same again. 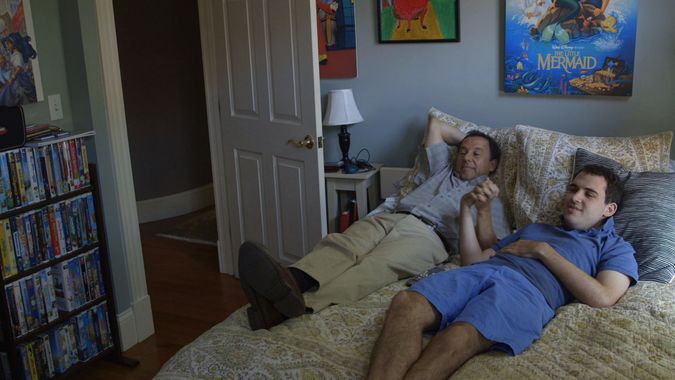 At Home With the Suskinds: Ron Suskind and his son Owen. Image by Courtesy of the Orchard

“One of the doctors asked me what I did and when I told him I was a reporter he said, ‘I’m sorry. This costs $120 a visit. You’re going to have to see me three times a week and this is not covered [by your insurance].’ My wife said, ‘My job is going to be Owen. Your job is going to be to make more money than anyone in the history of journalism.’”

Suskind came pretty close to that. He went on to become a best selling author of nonfiction works about politics and the presidencies of George W. Bush and Barack Obama. That part of his life, though, was as much a function of his father’s dying declaration as his son’s illness.

“My father died when I was a young man, a teenager. He was a terrific guy who read a letter to me and my brother from his deathbed urging us to seek a worthwhile life each day, and that set me on a path where I was not just reaching for demonstrative achievement.”

Living in Washington, D.C., his youngest son apparently lost to him, “I sort of took stock of my working life. I basically started reporting about inner city African American kids also in the discard pile of American society and got left behind like the person I knew living in my home.”

That series of articles won Suskind the 1995 Pulitzer Prize for feature writing and became the subject of his first best seller. But it — and all his subsequent books — did not diminish the financial burden he faced. “Narrative non-fiction books are not in the Jeffrey Archer-Stephen King category of books. Even when they do well, you can aspire to an upper middle class life, [but not great wealth]. We had to spend everything we had and even borrow money” to care for Owen.

Suskind found needed emotional nourishment in his faith. Both his parents were raised orthodox, but he and his brother were brought up reform, with “very much a strong expression of Jewish sensibilities, living, as my father asked, a life of purpose and worth.”

Ron’s wife, Cornelia, was raised Catholic, but they had a Jewish wedding and agreed to raise their children as Jews. Though Cornelia did not convert, “she was a forceful presence in their Jewish education.”

When Ron attended services to commemorate a Yahrzeit, “I found myself praying for strength. I drew sustenance through that particular avenue of faith, the Kaddish.”

The first glimmer of hope that his prayers might be answered occurred about a year and a half in. Owen had become obsessed with Disney animated films. He’d watch them over and over again, though he continued to speak what his parents considered gibberish.

One evening, they join him by the TV as he watched The Little Mermaid, repeating “juicervose, juicervose.” Owen keeps using the remote to replay Ursula, the sea witch, singing “Poor Unfortunate Souls.” It takes a while, but eventually Cornelia recognizes that what Owen is saying isn’t gibberish at all. He’s quoting the witch telling Ariel, “Go ahead. Make your choice…It won’t cost you much. Just your voice!” 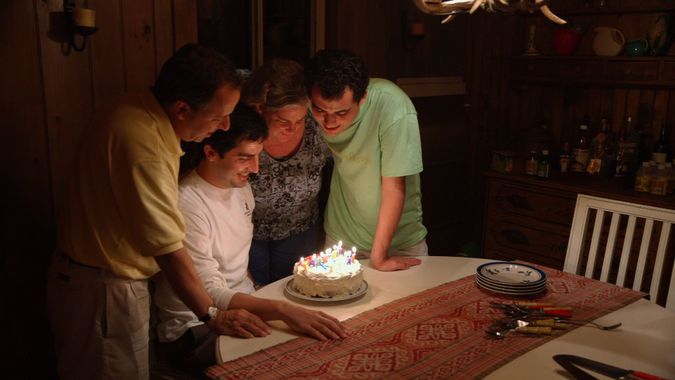 Birthday Celebration at the Suskinds: From left, Ron, Walter, Cornelia and Owen Suskind. Image by Courtesy of The Orchard

Their early enthusiasm was soon tamped down by doctors, who said it was something called echolalia, repeating sounds without understanding, the way an infant might. But the doctors were wrong as the Suskinds would find about two years later.

Older brother Walt had just celebrated his ninth birthday. His friends had left and he was a bit down in the dumps. Owen saw this, went to his parents and said: “Walter doesn’t want to grow up. Like Mowgli [from ‘The Jungle Book’] and ‘Peter Pan.’”

The Suskinds were stunned. Not only had Owen uttered a compete sentences, he made an astute observation. But no sooner had he come out with that statement when he disappeared inside himself again.

Ron followed him to his room and saw an Iago puppet on the floor. Iago is the parrot in “Aladdin” and a favorite of Owen’s. Ron grabbed the toy, sneaked under the covers and in an imitation of Gilbert Gotrfried, who voiced the character in the movie, asked Owen how he was doing. Owen responded:

“I’m not happy. I don’t have friends. I can’t understand what people say.” Father and son had a brief conversation, much of it dialogue from he film, and then Owen laughed. He laughed.

In the film, much of this is recreated in animation, but it is still difficult not to well up just a bit. Though it’s more than a decade later, both Ron and Cornelia have difficulty holding back tears.

But this was not the end. There were numerous ups and downs. Owen was forced to leave a special school where he made friends because he was unable to keep up academically. He regressed and then moved forward a bit.

The Suskinds discovered that Owen taught himself to read by studying the closing credits of the movies. Moreover, this supposedly speechless boy memorized and could recite the dialogue from dozens of motion pictures. He also could draw or at least copy. Suskind discovered an entire sketchbook full of expertly illustrated Disney characters, interestingly never the heroes, just the sidekicks. In the sketchbook, Owen gave himself the title of “Protekter of Sidekicks.”

Later, Cornelia asked him what a sidekick was: “A sidekick helps the hero fulfill his destiny.” And, yes, he responded when asked, “I am one. I am a sidekick.”

Suskind sees a kind Tikkun Olam sense in Owen’s belief that “we’re all really sidekicks and at our best when we help others fulfill their destiny.”

In a very real way, the Suskinds’ experience is helping other families with autistic children fulfill their destinies. Two decades ago, Owen’s connection to the world of Disney and similar behavior by others was considered “obsessive and non-productive. The idea was to break the kids out of that, try to limit it or cut it off. Or use it as a behavioral tool, a reward. If you do these 10 things you can watch the movie. I think since [‘Life Animated’] came out the therapeutic landscape has changed.”

For the Suskinds, the worst may well be over. Early on, they worried constantly, even when Owen was in theory well supervised while away at school. “Owen was walking through the world unprotected in a way, without some of the context that gives us safety. He could stray from the group and get hurt. We lived with that hair trigger.”

Owen is now able to think and communicate well enough to live on his own in a special community. “Over the last few years, his capacity has really grown. We stopped feeling that constant worry.”

The film ends with Owen traveling to Paris to address an international autism conference. He’s introduced and there is a momentary delay as he stands at the lectern, staring at the crowd. Not speaking. There is a nervousness in the room that slowly becomes palpable, as everyone worries if the trip and the speech are too much for the young man. At last he begins what proves to be a stirring talk that earns him a standing ovation and illustrates one of the key marketing mistakes associated with the film.

Kleenex should have signed on as the official tissue sponsor. There wasn’t a dry eye in the house.

Ron Suskind’s Family Story of Autism Will Make You Weep