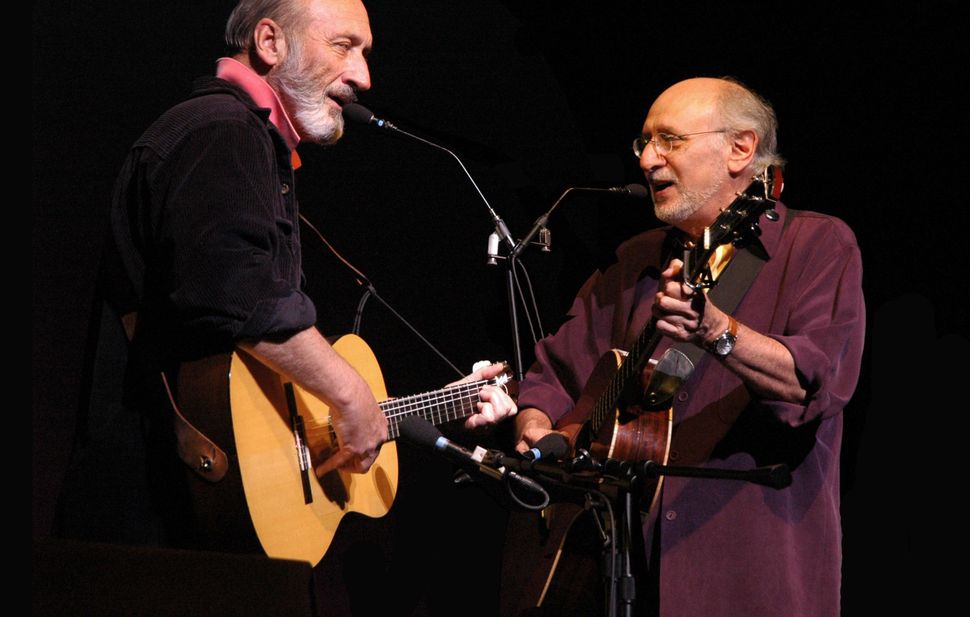 Image by Courtesy of Peter Yarrow

Peter Yarrow and Noel Paul Stookey have performed together about a half-dozen times a year since their partner, Mary Travers, passed away in 2009. Yes, Yarrow says, long-time fans of the influential folk group, Peter, Paul and Mary may at first think they sound a little “peculiar” without her. But that’s just at first, he says.

In a phone conversation with the Forward, he quickly adds, “People have actually come up to me [after a concert] and said, ‘I heard Mary’s voice.’ They don’t of course, but they sense it, because of the spirit of the music.”

It’s that spirit, that sense of mission that kept them together — except for a break in the 1970s — for so long. “Every normal relationship has problems and challenges,” Yarrow, 76, says. “But we felt an overriding sense of purpose and we felt it was really important to continue, unlike other groups that broke up because of individual foibles. We felt there was so much meaning in our being together.”

It is that same spirit that drives Peter and Paul to continue, to celebrate rather than mourn. “It’s always joyous. Yes, Mary’s gone, but the music continues. When I pass, I want people to think of me when they’re celebrating and having a good time, when they’re singing songs and their hearts are full of passion about working towards a more loving future.

“I think Mary would be honored to know the spirit continues. The concerts are not about Mary’s passing. It’s about the continued vitality of something we created together that still has enormous resonance, perhaps more so in these times when there is a desperate need for unity.”

Unbidden, Yarrow goes on to talk about why we need unifying — a presidential race that’s tearing the country apart, “a reflection that much of the country [feels] disenfranchised, racism, a criminal justice system that needs repair, and global climate change.

That the conversation so effortlessly switches from music to politics isn’t a surprise. The socially active trio was at the forefront of many liberal causes, marching with Dr. Martin Luther King in the south and appearing with him in Washington. They diligently protested the Vietnam War, as well. The songs they sang and popularized — “Blowin’ In The Wind,” “If I Had a Hammer,” “The Times They are a Changin’”” — became anthems for a generation. Yarrow’s song, “Light One Candle,” became a rallying cry for those working to free Jews locked behind the Iron Curtain.

And like Peter, Paul and Mary music, that spirit of activism, continues, too. In 2000, Yarrow founded a non-profit, Operation Respect, which teaches tolerance and respect for our differences. In fact, just a few weeks before this conversation, Yarrow was in Israel, where almost two-thirds of the schools, both Jewish and Arab, offer an Operation Respect anti-bullying program.

Yarrow believes his activism is at least in part fueled by his Jewishness and sense of Tikkun Olam. “I am more like the Israel population, Jewish but not observant. That doesn’t mean I don’t observe from time to time. It’s that I’m not deeply involved in religious observance. When I do I’m very moved by it. I’m very proud of ‘Light One Candle.’”

In fact, he sang “Day Is Done” — an optimistic song about the future a parent sings for a child — at Theodore Bikel’s funeral, and “sometimes I do wonder isn’t remarkable how certain songs are so Jewish.”

Curt Schleier writes about pop culture for the Forward.