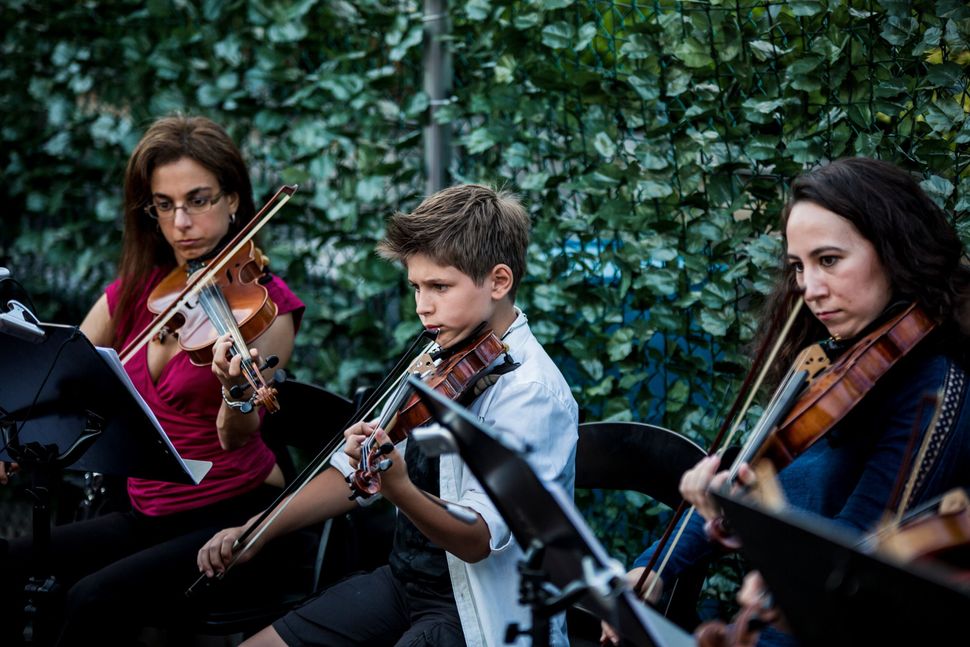 True musical genius can transform even the most imperfect instruments into a conduit for perfect music. So this old story illustrates, and so Alicia Svigals proved anew on a recent summer night on the roof of the Manhattan JCC. 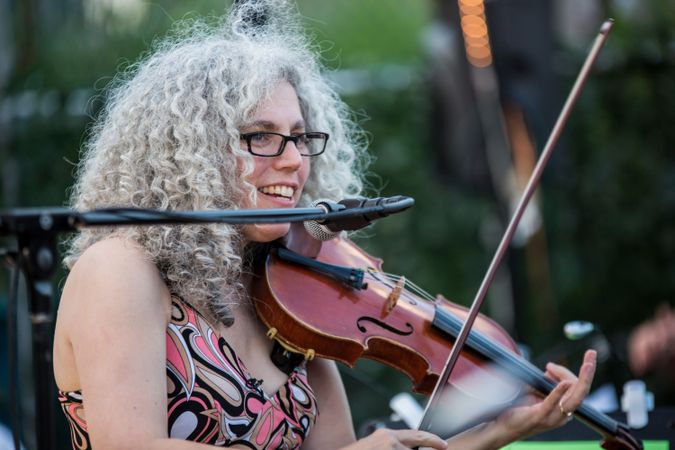 Alicia Svigals, the mother of modern klezmer, has taught hundreds of students across the globe, including master violinist Itzhak Perlman. Her style combines the harsh rhythms and dissonant melodies of Yiddish music with an airy modern lightness.

My decision to spend an evening learning from her was an impulsive one. For $15, a JCC advertisement had proclaimed, I too, a classically trained violist who hadn’t performed in front of a formal audience (outside of giving into inevitable annual requests from Jewish groups to “please play this or that sad Schindler’s List song for our Yom HaShoah commemoration”) in years, could “participate in a master class with Alicia Svigals and her band, then perform in the concert!”

Perhaps it was the advertisement’s additional promise that “whiskey and rugelach will be served” that hooked me. But more likely, it was the hope of overcoming my lingering fear of fully embracing the less easily justified aspects of Jewish life.

I grew up in megachurch-riddled Southwest Missouri. Country and American Top 40 (or if you were really a hippie, whatever was on NPR) were about the only musical genres my friends listened to. This made my personal klezmer music obsession both sacred to me and the mockery of all of my friends. I was a quirky kid, an orchestra nerd, and my Pandora stations filled with Hanukkah music and chasidic niggunim certainly didn’t help my social standing.

Since moving to New York and embracing a more observant Jewish lifestyle, my friends from back home have learned to accept my religious practice. But my passion for “funny Jewish music” is not as easily explained away as “I don’t eat X or do Y because God says so.”

I’ve come to believe that Jewish doctrine is far more easily accepted than our culture. Religion is a convenient catch-all for behaviors which are hard to reckon with; after all, who are you to argue with someone else’s god? It is far easier to tolerate a particular behavior if it is couched in religious rather than cultural terms. The same people who find our celebration of Rosh HaShanah or Hanukkah admirable roll their eyes and openly mock Jewish music celebrating either holiday. My best friend will happily comply with my requests for kosher food and is patient through my 25-hour delays in responding to any messages sent Friday night, but every time I put on a song in Yiddish or Hebrew, she immediately switches the music to something else.

On that night at the JCC, surrounded by Jews of all ages and inspired by Alicia’s unapologetic style, I began to feel confident openly celebrating the secular aspects of Judaism just as fully as the religious ones.

I had never previously set foot in the Manhattan JCC, but it seemed to be the usual JCC mix of sweaty old people and children covered in glitter glue. It did feel a bit odd dodging in between the gym-goers to go to a concert, but once the overworked elevator transported me up to the roof, I saw that with little more than some string lights and folding chairs, the space had been transformed; no longer was I nestled in the safe and familiar world of Upper West Side Manhattan, with our trusty bagel shops and designer stores, rather, here gathered a group of humble fiddlers who had decided to take this night and set it aside to celebrate Jewish music.

At the front of the makeshift stage stood Alicia, in a simple sheath dress, featuring a pattern that looked like the wings of an exotic butterfly. Her hair was unfussy, and perfectly frizzy. Her face was makeup-free, and she wore simple black glasses, like the kind your mother might wear while reading late at night.

Once the rehearsal started, she proved to be a goddess of both inclusivity and excellence. I had my doubts during the breakneck master class (which mostly consisted of trying to keep our music from flying away on the back of the dervishing breeze) as to whether the ragtag community gang could keep up during the actual performance. But the true brilliance of the evening was precisely Alicia’s decision to surround herself, in authentic klezmer style, with all who chose to come. Rather than sticking to her trusty standard band, she brought in everyone who wanted to join and it still sounded excellent, as if out of the squeaking and squawking of amateurs she had conjured something magical. She made klezmer seem approachable and fun, and embraced the presence of each musician equally, encouraging everyone to play loudly and confidently, regardless of skill.

Alicia began with an introduction of basic klezmer technique, a tangle of trills and stops and other ornamentation, and then ran us through the dozen songs we’d be performing that evening. A vital part of klezmer style is the steady rhythmic offbeat, which happens to also be really easy to play by simply repeating a note in the cord. She encouraged us to do this rather than fighting through the technically difficult passages. She was a gentle teacher, kind and confident. Though some professional musicians were scattered here and there, most of the players were amateur through and through. The woman to the left of me said she hadn’t played since middle school, and from the sounds emanating from her violin, I certainly could believe her. To my right sat a six-year-old boy who spoke exclusively French.

The audience, nibbling on their homemade rugelach and tossing back small plastic cups of honey colored whiskey, was all smiles and nostalgia. The large crowd, in their plastic folding chairs, belted out Chiribim Chiribom, Oy Tate, and other songs beloved by those over 50 and vaguely familiar to my fellow millennial Jews.

The music was undeniably good. But the night for me was less about musical excellence than about infusing with living color those passions so long confined to the private sphere.

After the performance, I felt as if I glided home on the gentle weathered wings of seldom-woken shtetl angels. The summer air was warm and humid, but not heavy; I practically flew down the 14 flights of stairs at the JCC, skipped the subway, and floated the 20 blocks home, humming along to klezmer tunes. For a night, I felt like a real musician again. The night was infinite, and at once I was certain that my ability to experience the full range of Jewish life, at once ancient and wonderful, has only just begun.