Never-Before-Seen Diane Arbus Photos on View at the Met 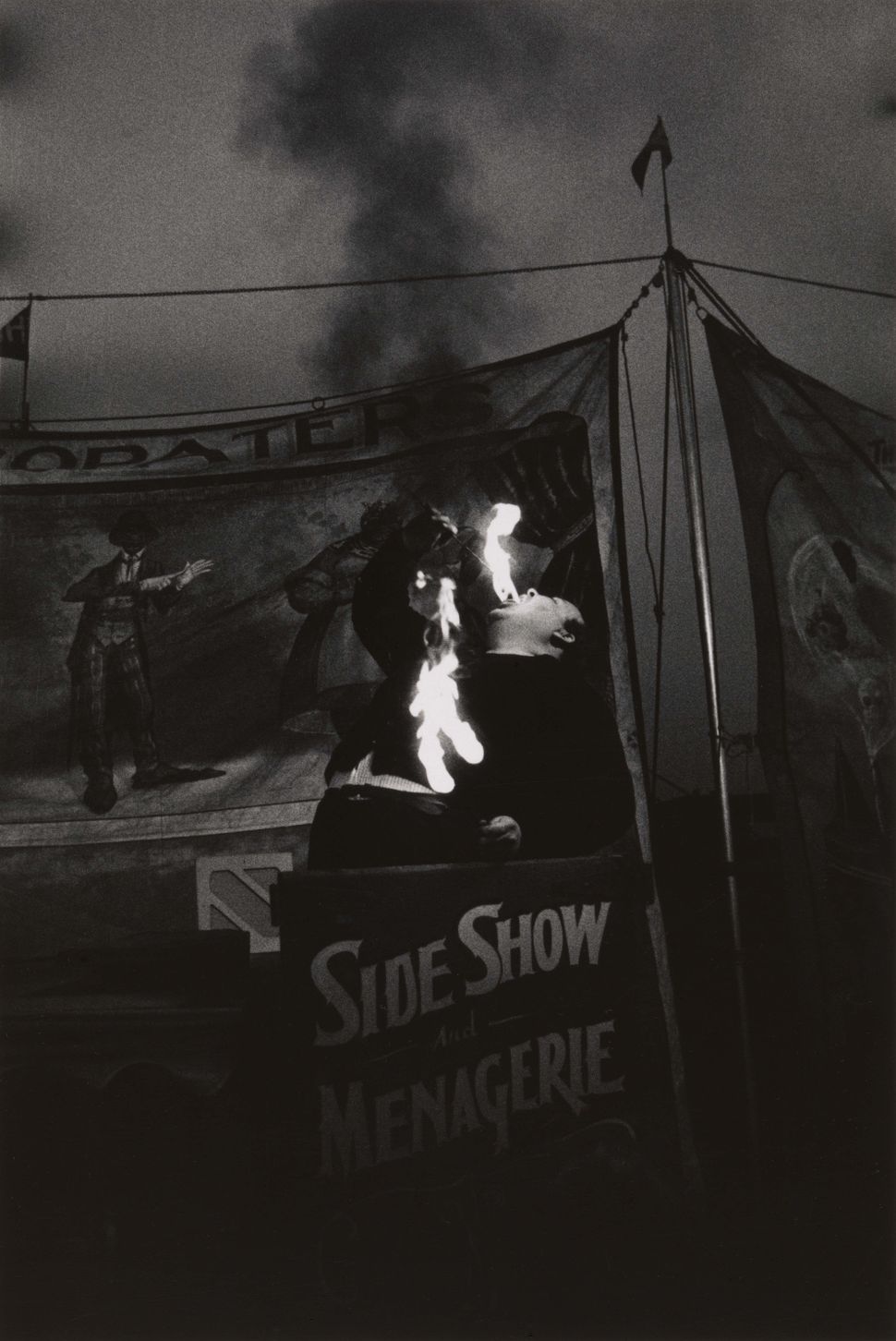 The new Diane Arbus show, which opened on July 12 at the Met Breuer, feels disorienting, even dizzying, at first, but not because of the content of the photographs or the overwhelming number of them (over 100). The second floor has been set up with rows of skinny, floor-to-ceiling panels in a diagonal arrangement, which mimics funhouse mirrors. Viewers wander through the exhibit as if they can’t find a straight path through. I tried to find a structure by following a zigzag pattern as if hiking a switchback trail. Others seemed fine bumping into each another and saying, “Excuse me.” At one point, I spotted a woman with owl-like glasses gazing at one photograph across the room. Seconds later, when I turned back around, I jumped to see her directly behind me.

That startling, eerie feeling you get while viewing the Arbus show is of course, heightened by the photographs themselves: portraits of circus performers, a fire-eater, the backwards man, female “impersonators,” a contortionist, a clown. Arbus haunted Coney Island, especially when producing these early works, to find “freaks,” outcasts and fringe characters, and formed lasting relationships with many.

“diane arbus: in the beginning” chronicles seven years of Arbus’ career from 1956 to 1962, the date when she named a roll of film in her 35mm camera “#1,” as if 1956 was her first plunge into photography, though she was given her first camera at 18 in 1941 by her husband Allan Arbus. Over two thirds of the photographs have not been seen publicly before; they come from the Diane Arbus Archive and some private collections.

Arbus was born in New York City in 1923 to Jewish parents, and throughout her career, she photographed the city’s inhabitants. She was known for her strange, kind of creepy, portraits and several famous ones make it into the exhibit, like “Child with a toy hand grenade in Central Park” which depicts a skinny blonde boy giving a contorted, lunatic-like expression. The years chronicled in the exhibit are her most transformative and well known. Her and Allan divorced in 1969 and Arbus struggled with depression. She committed suicide in 1971, in New York.

The pictures in this particular set are lonely but intimate. Arbus often used a single light source — a dangling bulb in a hotel room; the flames a man gulps down his throat — making her subjects glow amid the blackness around them. In photographs where she snapped performers on stage, she assumed the vantage point of someone sitting behind the audience, so the people before her seem fixated and in awe of the “freak” before their eyes, though we can’t see their faces.

Interspersed between the photographs of circus performers are portraits of “regular” people: “Girl with a pointy hood and white schoolbag at the curb”; “Boy above a crowd.” The long, generic titles would theoretically feel less personal than the ones in which we know who the subject is, for example, a midget named Miss Makrina who mops her floor, but somehow they make the photograph all the more sincere. We imagine these people could be any Joe-shmo that Arbus happened to stumble upon while they were going about their daily routines. From the subjects’ direct interaction with the camera though, we know that isn’t exactly true, and Arbus was also criticized for tempting the most grotesque or extreme expressions out of her subjects.

In a sense, we are an extension of Arbus, and she of her camera. She draws us into the subjects’ personal spaces, where we often find them alone – sitting in a dressing room, on a hotel bed, behind the reception desk. Arbus was criticized for this voyeurism, the most famous censure being from Susan Sontag who accused Arbus in a 1973 essay titled “Freak Show” for “fraternizing with freaks.”

“Arbus’s interest in freaks expresses a desire to violate her own innocence, her sense of being privileged,” she wrote in the New York Review of Books piece. “Arbus reflects a cut-rate pessimism, naïve and, above all, reductive.”

The claims sparked controversy though and some have since defended Arbus.

“Imputations of “voyeurism” are absurd; voyeurs must feel safe, and Arbus’s pictures are like the gaping barrels of loaded guns,” wrote Peter Schjeldahl in a 2005 New Yorker article.

By the time I had reached the “end” of the exhibit, my thoughts still felt warped. I pondered returning at some point to sort them out, but wondered, would that make me a victim of Arbus’s voyeurism? I had been in awe of the photographs, like she herself once claimed to be, too. The other press viewers around me snapped photos, chuckled, pointed out details to friends, and I’m sure felt the same fascination that both I and Arbus had.

To me, Arbus’s reaction to her subjects was a human one, and why should she be exempt from humanity when we argue that her subjects certainly shouldn’t? The decision to photograph and intermix portraits of both “regular” people and “weirdos” seemed clear commentary that we are all in a sense freaks, and all freaks are human.

Never-Before-Seen Diane Arbus Photos on View at the Met