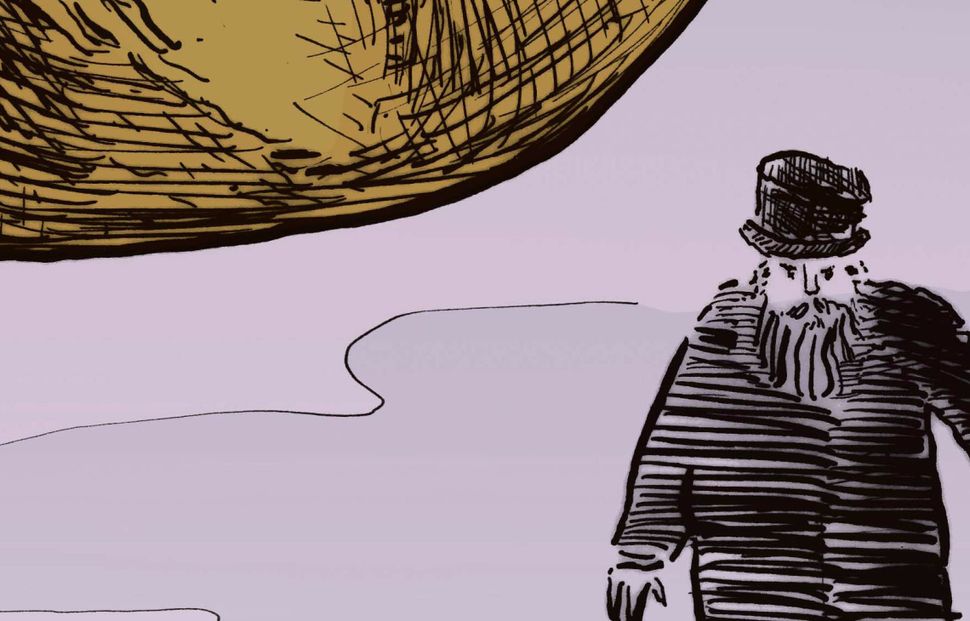 Did the Enlightenment come to the Jewish world like a thunderclap? Like a mist drifting in? Like an alarm clock penetrating a deep sleep? It doesn’t matter. It came, and with it a writer who could stand outside and inside at the same time. “Bontche Schweig” by Isaac Loeb Peretz is one of those tales that deepens and provokes more as history bears down on it. revealing the not so simple bones of what might appear to be a sweet ode to the crushed and the victimized, but is not.

“Bontche lived quietly and died quietly,” Peretz writes. “He passed through our world like a shadow.” His mother died when he was 3. His stepmother hated him and barely fed him. He had no schooling. “He lived like a little dun colored grain of sand on the seashore among millions of his kind.” No one showed him any tenderness. No one protected him from harm. “He had no kith and kin.” He lived and died alone.

He had a drunkard for a father. He had no teachers, no friends, but he kept silent and did not complain.

That is when the story begins. His headstone is a wooden board that topples over, leaving no marker for mourners who never come. But the angels in heaven are awed by his arrival; they greet him with compliments and dance around him. There is a court that will approve his entry into heaven, although in his case this is a mere formality. The angel speaking for him tells the terrible, sad story of his uncomplaining life, and the prosecuting angel, who should argue against him, has nothing to say, and he is granted entry and greeted with love and told that all of heaven, with its diamonds and golden chairs, belongs to him, “Take what you want,” the Judge says. After hesitation, Bontche smiles and says, “I would like to have every day for breakfast, a hot roll with fresh butter.” 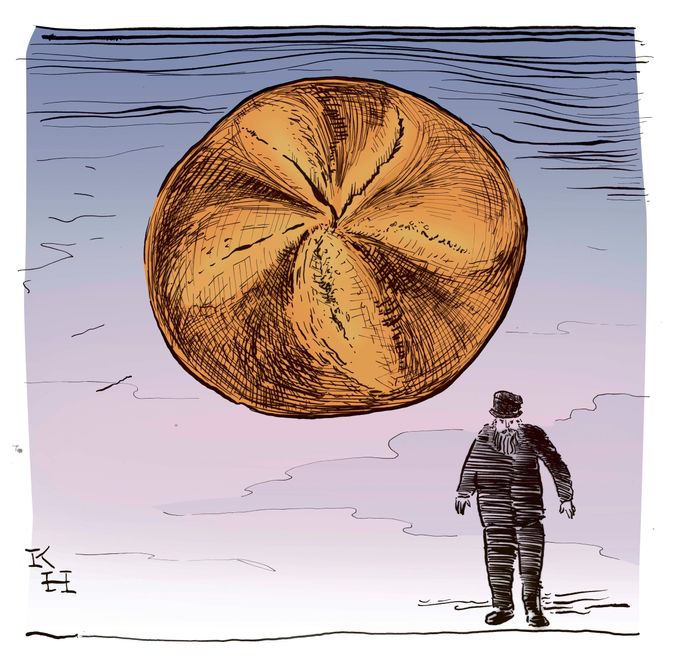 This story could be read as a tale of extreme virtue, and acceptance of one’s fate, a fate that would be rewarded in heaven. But when one thinks of Jewish history at the end of the 19th century, and the pogroms and the exiles and the poverty and the threats everywhere, and the laws that prevented Jews from owning land, and the falseness of Messiahs, and the brutality, major and minor, of Jewish life in those places in those days, it is hard to read this story as anything but a bitter comment on passivity, on acceptance of the unacceptable.

Despite the bravado of “Next year in Jerusalem,” the years followed without redemption.

And that leads us to the Shoah that Peretz could not have envisioned. What sane man could? But the question of Jewish passivity in the face of oppression is still with us. And it even affects Israeli politics as we all feel a communal “Never again,” and a communal need to raise our voices loudly and defend and protest and erase the misery of Bontche with a new proud Israeli, Uzi, at the ready, willing to push, unafraid, certainly not silent. Certainly not passive in the face of danger. In this sense, Benjamin Netanyahu is the anti-Bontche.

There is the famous story Freud repeats. His father was walking in Galicia when a gentile man came by, called him “Jew” and knocked his hat into the muddy gutter. His father told his son that he simply picked up his hat and said not a word. Freud was humiliated. Physical harm to his father was avoided, but the harm done to the child who heard the way his father accepted this treatment remained. Years later, when Freud was forced to sign a paper saying the Nazis in Vienna had treated him well, he added a note saying that he would recommend the Nazis to anyone. This additional sentence he himself might have called passive-aggressive, but it was also a tip of his hat to Bontche, a fellow Jew.

This very short story could be read as a reproach to the Jews of the Diaspora, who did not attack their neighbors who burned their stores, who stole their goods, who slandered them over and over again, claiming poisoned wells, murdered children, from pulpits of power sending out false accusations. The outnumbered Jews rarely confronted force with force.

A human being without aggression is not a person at all. He or she is a bone tossed to a dog. He or she is a worm gone with the arrival of the sparrows of spring. But a person whose aggression erupts and boils over and burns those in its path regardless of justice or truth or empathy, a nation of people like that might just harm itself as it punches and kicks without restraint or reason or ethical reflection.

During the Third Reich, the angels may have been as delighted to see us as they were to see Bontche Schweig, but too many souls arrived in heaven long before age itself would have pulled them into the grave. In those places, in those times, Jews died without justice, without fairness, without reason, silent or not.

Peretz had evidence enough for his story without the Shoah that waited for his people just at the next turn of history. But after 1945 we did debate the issue and we settled it. No, the Jews were not passive. They were not armed, they were not expecting this assault, they had no means of understanding something so brutal as the industrial murder of millions. We have dismissed the idea that Jewish passivity contributed to the catastrophe, but we can’t quite remove a certain flinching, Freud’s flinching at his father’s avoidance of a conflict, a compensatory focus on uprisings like the Warsaw ghetto or the Sobibor revolt. We cling tightly to each tale of resistance. See, we were not like Bontche Schweig.

When I see Israeli bulldozers knocking down Palestinian houses, I accept that this is necessary. I am happy we have a strong army that will insist on our right to a home of our own. Israel is asking for an entire nation, not a hot roll with fresh butter, and that is worth a loud “Hallelujah,” but sometimes I wonder, when we insist on building settlements and blocking roads and elect or appoint people who cannot compromise because of religious or ideological stands, could we use a little less Golem and a little more Bontche Schweig — just a little.

Isaac Loeb Peretz saw the danger and ridiculous peril of the piety and protective silence of the good folk who lived under the rooftops on which fiddlers and cows were dancing by the light of the moon. Lilith was snatching babies from their cradles, and Cossacks, with their guns and their intentions to rape and pillage, were approaching through the woods. The story of “Bontche Schweig” is not a lullaby to let us sleep better at night. Come on, Bontche, Peretz was saying, kick someone in the shins or at least speak up, demand, complain, insist, resist.

But when Bontche becomes himself the bully, the bully who cannot imagine the pain of others, then we lose ourselves and forfeit even the hot roll with a little fresh butter.

Peretz was satirizing the Hasidic visions of thrones and angels and God as king in a paradise envisioned something like a Trump casino. In the story, the floor of the heavenly courthouse is all alabaster set with diamonds. There is a gold throne and a gold crown. Peretz captured the appeal and the charm of these fairy tales even as he mocked those sugary fables.

But of course it was also a cruel illusion that the world of science and reason would bring us safety and comfort. The trains did not run in that direction.

It was much braver of Peretz to make fun of that primitive imagery than it is for me now. And this story gains him entrance to any version of heaven the human mind can create.

An anthology of Jewish stories may be as close to Paradise as we can get.