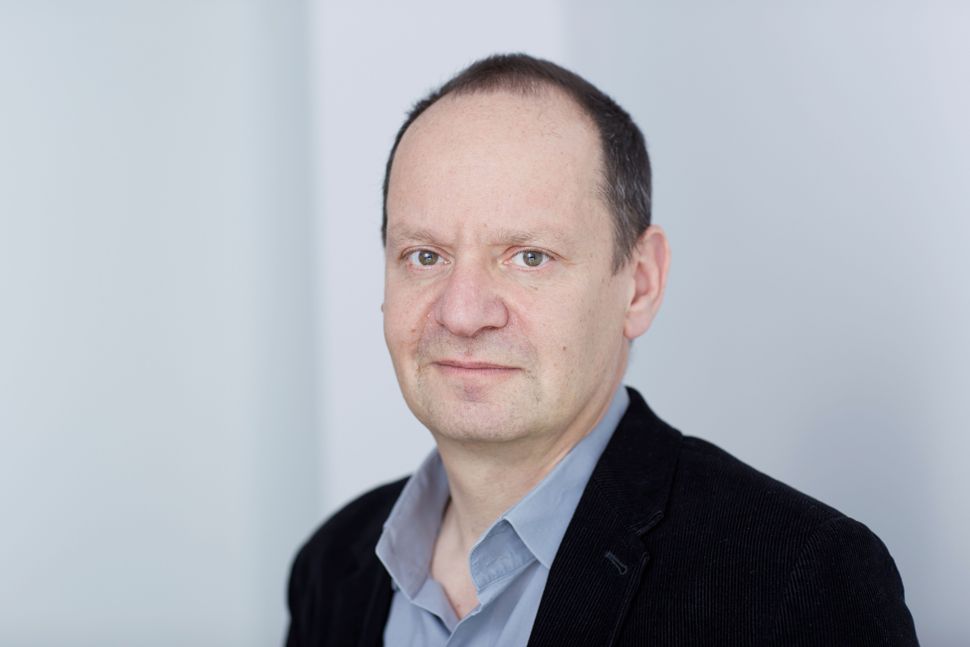 East-West Street: On the Origins of “Genocide” and “Crimes Against Humanity”
By Philippe Sands
Knopf, $32.50 448 pages

At the beginning of Philippe Sands’s tour de force “East West Street: On the Origins of ‘Genocide’ and ‘Crimes Against Humanity,’” Sands offers a quote from the French psychoanalyst Nicolas Abraham. “What haunts are not the dead, but the gaps left within us by the secrets of others.” Abraham’s work looked at the relationship of grandchild to grandparent, not parent to child; it is here, in the third generation, that he finds fresh reverberations of the trauma.

“Abraham’s quote is the key to understanding the book for me,” Sands told me over breakfast in the middle of his brief, whirlwind book tour.

Sands is an international human rights lawyer, a barrister and a professor of law. For the past 30-odd years he has prosecuted crimes against humanity, and genocide. He worked on the legal team that took on former Chilean dictator Augusto Pinochet. His last book, “Torture Team,” illustrated the crimes of the second Bush administration. He told The New Yorker’s Jane Mayer, upon its publication, that those implicated in torture were “at risk of arrest,” for violations of international law.

Sands has pursued this particular theater of law for so long because of an invitation to work alongside his teacher and mentor, Elihu Lauterpacht, whose father, Hersch Lauterpacht, developed the concept of crimes against humanity in international law. There are more points of commonality, but the rest did not surface until the writing of this book.

For Sands, grandson of a Holocaust survivor, the search for understanding the global legacy of the war and its modern impact begins within, and always circles back to, the silences, secrets and half-narratives that dominated his relationship not only to his beloved nuclear family, but also to his mother’s family, and to her parents before her. The urge to understand these “haunting gaps,” as Sands puts it, propels “East West Street,” a penetrating, hard-to-categorize work that will come to stand alongside Daniel Mendelsohn’s “The Lost” as a pillar of the emerging genre of third-generation investigation into the legacy of the European Jewish apocalypse. Like the tenets of international law under investigation here — the invention of the terms genocide, which concerns the persecution of groups, and crimes against humanity, which addresses atrocities against individuals — this is a history that is both personal and universal, individual and yet impossible to understand without the collective.

What Sands has done so remarkably in this book — equal parts legal scholarship, memoir and multitude of mysteries, told with admirable suspense and elocution — is to ably demonstrate the relationship of the law within his own family narrative, and thus, by extension, all those family narratives rerouted and upended by the Shoah. Interwoven are the personal narrative histories of Hersch Lauterpacht (and the history behind the concept of crimes against humanity) and Raphael Lemkin (who coined the term genocide). These were the men whose legal thinking brought to the world the ideas that never again could countries destroy individuals and communities with impunity. Their connection is not just the law, but also heritage (both men were Jews), and, peculiarly, geography. Both men studied at the University of Lemberg — now Lviv — law school, albeit at different times, and both men fled Poland: Lauterpacht for Cambridge, in the United Kingdom, and Lemkin, ultimately, for Duke University School of Law. And though they both influenced the trials at Nuremberg, and international law forever after, and though they (at times vigorously) disagreed, they never met face to face.

That Lemkin and Lauterpacht’s stories literally began in the same place, Sands learned only in 2010 when, after three decades of toiling in the ideas of these men, he was invited to speak in Lviv. He went, he tells me, because it was also where his own grandfather was born.

“I didn’t set out to tell a story,” he said. “I got an invitation.” Upon arrival he realized that the city, and the law school, had effectively erased all memory of these two pillars of legal thought. No one at the law school knew these men were alumni.

Sands’s book stands out because, in addition to ably explaining the complexity of the development of these laws, and their applicability, he is uniquely obsessed with detail. He walks the streets these men once walked, finds the homes they were born in, sits in the law school classes where they debated their earliest ideas, and visits the mass graves where parts of their families were, ultimately, interred. So here we find both the detail of concepts and the detail of personal lives and geographies. To wit: The sole surviving member of Lauterpacht’s extended family, a girl named Inka, describes for Sands watching her mother torn away, down to the heels she is wearing. And Sands narrates how Lemkin, on the run, carried with him valises filled with the news of Poland and other occupied zones, which he then combs for the destructive restrictions announced, day by day, week by week, month by month, that excise Jewish communities from the greater populations in which they were once nestled. Sands acts as archivist and archaeologist, traveler and historian — but also as horrified observer.

The slow disentanglement of normalcy, that nefarious, meticulous setting of one group outside society, leads Lemkin to realize that the concept of group disenfranchisement and persecution required a neologism. In the archives at Columbia University, Sands comes across the actual doodled upon page where Lemkin played with the idea of melding geno (race from the Greek) and cide (killing from the Latin). He then spent much time lobbying the lawyers of Nuremberg to apply this new idea to law.

Lest it seem this is merely a book of the men of history, Sands’s book is shot through, as well, with the stories of women — perhaps no woman more remarkable than Elsie Tilney. A tiny scrap of notepaper is found amid the morass of his grandfather’s papers, scribbled with the words “Miss Tilney” and a half address, in Norwich. It was this woman who carried Sands’s infant mother — alone — to Paris from Vienna. The stories of why Sands’s mother traveled alone, why his grandparents were apart for three years of the war, and why Miss Tilney made that journey are so improbably cinematic that they are, themselves, almost a mini-novella within this greater story. That Sands’s uncovered not only the identity of Miss Tilney, lost, he’d believed, to history, but also her unbelievable (and multiple) acts of heroism is one of this book’s greatest joys.

“What I’m interested in is the connection between the personal and major structural changes,” Sands told me the other morning, “and the Lauterpacht-Lemkin story is a major structural change — it is actually a revolution in thinking about the power of the state over its people. It is the first time in human history that said the power of the sovereign is not unlimited. That there is an external power that is greater, and that power is international law and it is more specifically crimes against humanity and genocide.”

He finds himself, he said, “intellectually closer to ideas of Lauterpacht, but I cannot shake off Lemkin.”

He turned, as we signal for the check, to this moment, in this country, and Europe. “I think there is an unfortunate reality because of where the world is, and where Europe is, and I have to say that, for me, there is a real anxiety about where we are heading and the issues that have largely been forgotten by the grand public about what happened in the 1930s and the system of rules put in place to address that, including those by Lauterpacht and Lemkin. The book is sort of a salutary reminder of where we have come from. When Trump talks about judges with Mexican heritage, the first thing I thought of was Hitler saying ‘I’m not appearing before any judge who is a Jew.’” He hastened to say there is a difference between the presumptive Republican nominee and Hitler, but “he is using a method that is horribly familiar.”

Later that night, Sands mentioned the Abraham quote about grandparents and grandchildren in a program presented by the U.S. Holocaust Memorial Museum. He was joined onstage, halfway through his talk, by Niklas Frank, whose father, Hans Frank, served as Adolf Hitler’s personal lawyer before governing the slice of Polish territory that would destroy the Lauterpacht and Lemkin families — as well as that of Sands’s grandfather. Hans Frank was hung after Nuremberg.

Niklas Frank and Sands have, in the past few years, become close. Together they worked on a documentary film — “What Our Fathers Did” — that premiered last year at the Tribeca Film Festival, where I saw it at Sands’s invitation. Sands had reached out, via Twitter, and recommended it, having read my book. At the talk, Frank revealed from stage that he was donating the surreal, color films of the Krakow ghetto to the museum. They were among the items of his family, macabre souvenirs. In one frame, in the middle of a group of children, there is a girl in a vibrant red dress, smiling, incongruously, into the camera. Frank has spoken out again and again against his father. In the book, he and Sands return to the courtroom at Nuremberg where his father was sentenced.

“We are genuinely friends,” Sands said. After the talk, after all the books were signed, the two men were joined by Nazi hunter Eli Rosenbaum. As if to underscore the level of research, the depth of his search, Sands and Rosenbaum explained how their work intersected and they met for the first time. In searching for a copy of Lemkin’s work, “Axis Rule in Occupied Europe,” Sands asked an eBay seller to pass along a note to the buyer, who had scooped up the purchase just ahead of Sands. Sands explained he just wanted to read the dedication. The buyer was Rosenbaum.

Sarah Wildman is the author of “Paper Love: Searching for the Girl My Grandfather Left Behind” and is a contributing editor to the Forward.