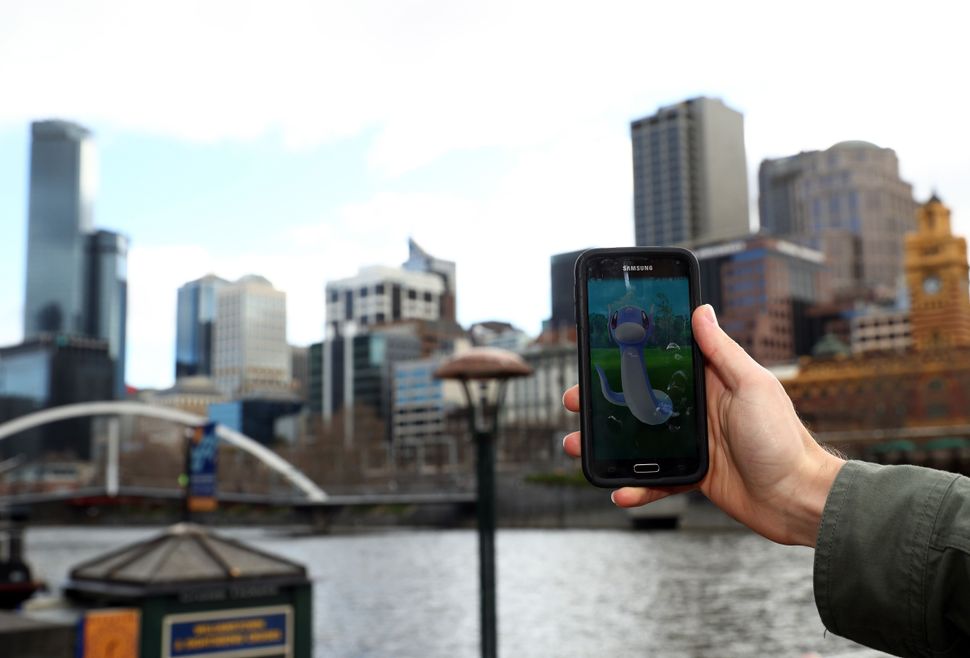 Rav Ashi, the first editor of the Babylonian Talmud, once dreamed that he was having a conversation with Manasseh, a King of Judah who had died about a thousand years earlier.

Ashi asked: “Since thou art so wise, why didst thou worship idols?”

Manasseh replied, “Wert thou there, thou wouldst have caught up the skirt of thy garment and sped after me.”

“It’s not like we came here to play,” Angie, a 37-year-old who was seen chasing virtual Pokemon Go creatures inside the Holocaust Museum, told the Washington Post. “But gotta catch ‘em all.”

Modern people in the west tend to think of idol worship as being basically the same as icon worship. That is, the worship of symbols. The golden calf is now a metaphor in itself, a go-to symbol of superficiality. We imagine Aaron’s misguided followers worshipping money and glamour (though they probably had neither), not the actual calf.

But if the story is true, then the people were probably worshipping the actual calf. In ancient times, a village might have had a temple containing the statue of a god, but for all practical purposes, the statue was the god itself. If an enemy tribe captured or destroyed the idol/god, then the remedy wasn’t as simple as just building another idol. Another idol would be a different god. In a world of relatively few man-made objects, those objects that were crafted to represent the divine were considered to have power in themselves.

In fact, from the point of view of a pagan during Abraham’s time, the Hebrews were the ones out of touch with reality. Idols, at least, were tangible things. To worship an idol and to pay respect to a great work of art weren’t so different.

The Hebrew experience with God was (or seemed) considerably more abstract. God became a force that could manifest suddenly, at any place and time, in an unexpected form. Burning bushes. Parting rivers. Rocks that turn into water spouts if the right person hit them with the right stick.

In fact, the Exodus experience of wandering back and forth through a desert, always on the verge of death, hoping to encounter magic in unexpected places, and waiting for divine permission to begin the next phase of the journey — that’s closer to a modern video game experience than most religious stories you’re likely to find.

While the Hebrews received mannah from heaven, manna is a term known to all 21st century gamers. It’s a magic, life-giving resource that keeps games balanced. The latter term is Polynesian in origin, and has no relation to the nutrients that may have fallen on the followers of Moses from the sky.

Unless the world is actually a magical place, designed and controlled by a single omniscient being. In which case, how could there not be a connection?

Or maybe that being isn’t God, but a game designer. Tesla creator Elon Musk recently speculated that we are all living inside a simulation. If he’s right, is that good for the Jews, or bad for the Jews?

One thing that sharply differentiates Judaism from the more popular versions of Christianity and Islam is the focus on the here and now. You can be a bad Jew, but you’ll still be a Jew for the rest of your days, and whether or not you’ll face an eternal reward is not up to you.

I grew up in Kansas, surrounded by Evangelicals. When friends of that ilk would ask me whether Jews believe in an afterlife, they were often baffled when I referenced those lucky biblical forefathers who “walked with God,” explaining that it’s not really clear. The experience is a bit like explaining a strange and abstract game (like Pokemon), only to be interrupted with “Yes, yes, but how do you win?”

How indeed? Pokemon, like life, cannot really be won. Like Judaism, it’s possible to keep score (are you more righteous than your neighbor?), but that’s mostly just a way to keep yourself motivated to play.

Is the pursuit of Pokemon akin to idol worship? Put more broadly, is it wrong to understand the world in which we live as a game created by someone else?

Even if every word of the Torah is true, Musk’s statement leads to a profound question. We are well beyond the age of miracles. If Moses really did see that bush burn, he must have been amazed. But would he have been less amazed to see a giggling Japanese cartoon rabbit hop across his path? If you see water spring from a rock tomorrow, will you assume it’s a message from above, or a cheap trick? We enjoy our apps and our movies, but we have passed the point of being truly impressed by spectacle. I’m part of the first generation to grow up immersed in simulacra, and there is no experience that could possibly lead me to say “Now that was no special effect! I’m sure that came from God!”

We have to look within to discover what’s real and what isn’t. How would the ancients have guided us?

Here are two worlds I know about. I look out my window in Brooklyn, and I see them layered on top of each other. I can’t prove that either is more real or urgent. But here they are.

In the first world, small animals in primary colors dance across our vision. They appear in random places. We can collect them for points. It’s fun for people who are playing it. For everyone else, it’s a bit annoying. But maybe those people are just laggards.

In the second world (which you can see inside the first, if you look carefully), there are refugees held in American detention centers, private prisons sucking poor people out of their homes, commuters shot for moving violations, a looming war in Syria, the most powerful country on Earth on the brink of upheaval, and the global ecosystem already permanently damaged. It’s a world in which people have been, with increasing frequency, throwing up their hands, saying “What should I do?” What’s the object of the game?

For me, the point of life is not to stay in the desert, wandering around, seeking random spectacle, hoping to be transported to the next level. Israel — the place beyond that desert — literally means “struggle with God.” It doesn’t matter whether we’re living in a simulation. We are permitted to argue with the designer. Indeed, that argument is the game itself. Let’s play the hard version.

Michael Bennett Cohn is a digital media consultant based in Brooklyn.