9 Jewish Facts About the Planet Jupiter 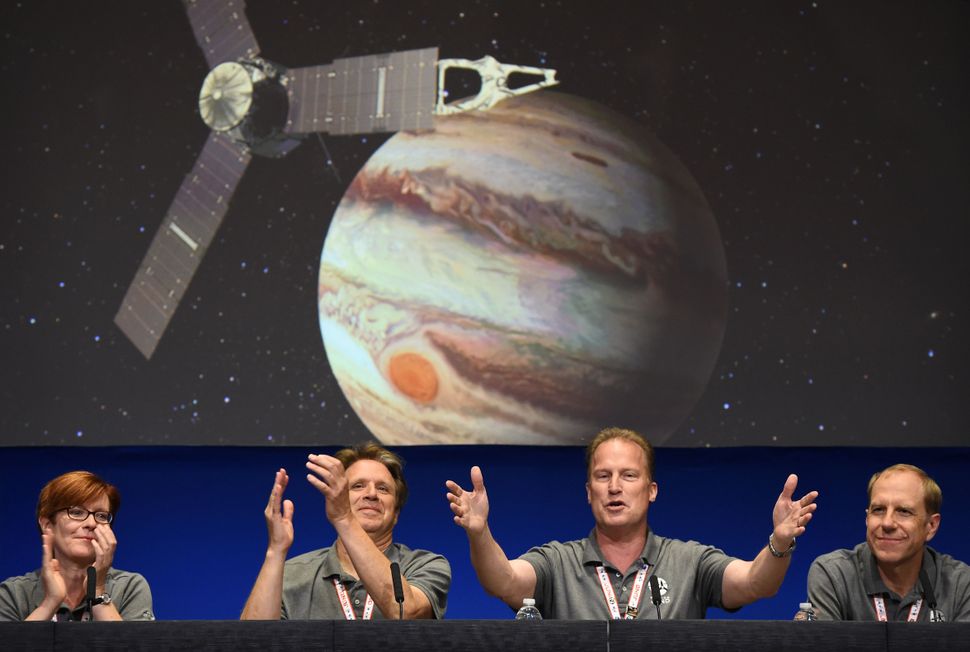 To the delight of space geeks worldwide, NASA’s spacecraft Juno has sent back its first images from Jupiter. While there’s a vaguely amusing linguistic case to be made that the planet’s name makes it the most Jewish of the spheres, here are some slightly less nebulous – space pun unavoidable – reasons to celebrate “Jew”-piter.

In a celestial name check, in “Changing of the Guards” Dylan sings of a “beloved maid:” “They shaved her head/She was torn between Jupiter and Apollo.” Today, just this once, we think her choice should be clear.

Rogers and Hart wrote a musical called “By Jupiter”

It’s set in the land of the Amazons. It features a war correspondent named Homer, fresh off the success of the “Iliad.” And no, it might not be politically correct enough to survive a modern production. But the first two songs are called “For Jupiter and Greece” – strange, as Jupiter was the name of a Roman god, not a Greek one – and “Jupiter Forbid,” and, well, that’s good enough for us.

Kubrick’s masterpiece, “2001: A Space Odyssey” is set, in part, on Jupiter. We wait eagerly for Juno to confirm that the planet looks just as the auteur imagined.

The actress was Mila Kunis, and the film was a spectacular misfire. Not every Jupiter-centric film can be Kubrick caliber, but at least Kunis’s character’s name, “Jupiter Jones,” was kick ass.

There’s a synagogue in Jupiter, Florida

I know synagogues aren’t big on decorating, but I’m loving the idea of a Juno-themed bimah. Maybe someday.

Philip Roth is a fan of the planet

In the unromantically titled “I Married a Communist,” Roth’s narrator waxes poetic on the planet. “If the weather isn’t bad and it’s a clear night,” Roth writes, “I spend fifteen or twenty minutes before bedtime out on the deck looking skyward, or, using a flashlight, I pick my way along the dirt road to the open pasture at the peak of my hill, from where I can see, from above the treeline, the whole heavenly inventory, stars unfurled in every direction, and, just this week, the planets Jupiter in the east and Mars in the west. It is beyond belief and also a fact, a plain and indisputable face: that we are born, that this is here. I can think of worse ways to end my day.”

So is Neil Gaiman

King of the fanciful description, Gaiman used the planet as colorful context for a “Neverwhere” character’s fear of heights. “To say that Richard Mayhew was not very good at heights would be perfectly accurate,” he wrote, “but would fail to give the full picture; it would be like describing the planet Jupiter as bigger than a duck.”

In his 1983 play “4 A.M.” Mamet features an interaction between a late-night radio host and a caller, the latter of whom delves into the tangled web of theoretical connections between the Toynbee tiles, which allude to the idea that the dead could be resurrected on Jupiter, and “2001: A Space Odyssey.” We don’t really understand, but hey, the mysteries of Jupiter are only starting to be revealed. As Rogers and Hart might say, Jupiter forbid we rule out any possibilities yet.

9 Jewish Facts About the Planet Jupiter