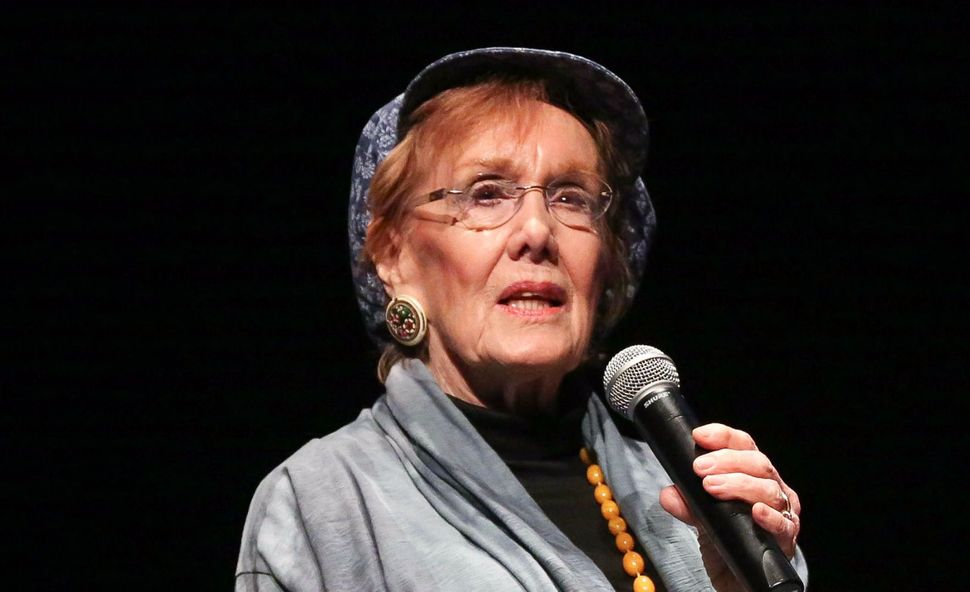 Marni Nixon, who died on July 24 at 86, was more than just the off-screen dubbed singing voice for unmusical actresses in such Hollywood movies as “The King and I,” “West Side Story,” and “My Fair Lady.” A marriage with the screen composer Ernest Gold (born Ernst Goldner), who wrote the soundtrack music to “Exodus,” among other hit films, produced a son, Andrew Gold, a singer/songwriter who created the theme song for the sitcom “The Golden Girls,” “Thank You for Being a Friend.”

Nixon had career-long ties to Yiddishkeit, from even before her days as a child violinist in California’s Peter Meremblum Junior Symphony Orchestra, starting at age seven. Meremblum was a daunting taskmaster, as another pupil, the Guarneri String Quartet leader Arnold Steinhardt recalled in “Violin Dreams” and “The Art of Quartet Playing.” Steinhardt describes Meremblum as a “fiery” martinet and pupil of the eminent Hungarian Jewish violinist Leopold Auer at the Saint Petersburg Conservatory. Meremblum would become “rather tempestuous” if a child dared play out of tune, but Marni Nixon was blessed with absolute pitch, the ability to produce a musical note without referring to a previous note, thereby avoiding chastisement. Famed musicians such as Jascha Heifetz, Arthur Rubinstein, and Gregor Piatigorsky performed with Meremblum’s Junior Symphony Orchestra, but Nixon was especially struck when at nine she performed with a piano soloist, André Previn, only a year older than she. There she was also first asked to sing arias with orchestral accompaniment, as she recounted in her autobiography.

Nixon began serious voice lessons in her teens with Vera Schwarz, an Austrian soprano with Jewish family roots, noted for her singing partnership with the Austrian Jewish tenor Richard Tauber. Nixon recalled: “Sixty years later, I drew on the theatricality and opulence of Vera Schwarz to play the role of the former operetta star, Heidi Schiller, in the Broadway revival (2002) of Stephen Sondheim and James Goldman’s ‘Follies.’”

Nixon’s early introduction into the film industry came as a mute extra, but her first soundtrack singing gigs were due to Jewish friends of her family. In 1947, Ida Koverman, Louis B. Mayer’s all-powerful personal secretary at MGM and a pal of Nixon’s mother, landed the youngster a job delivering mail around the studio to pay for her vocal lessons. The Polish Jewish MGM studio composer Bronisław Kaper, who knew Nixon from her work with Meremblum, hired her to dub in a lullaby for the film “The Secret Garden,” to replace the voice of child star Margaret O’Brien.

This soon led to much off-screen work, concertizing, and recording with musical partners, of whom the most theatrical and opulent was doubtless Leonard Bernstein. Nixon’s technical assurance in varied challenging repertoire, light and serious, may have reminded Bernstein of his early mentor, the Russian Jewish mezzo-soprano Jennie Tourel. Nixon’s smarts and poise certainly impressed Bernstein, especially during a live TV broadcast when a teleprompter failed but undaunted, she offered an off-the-cuff translation of the words she was singing in the Auvergnat variety of the Occitan language, set to music by the French composer Joseph Canteloube. In his sometimes-trepidatious presentation of contemporary music, Bernstein gave the U.S. premiere in 1960 of Pierre Boulez’s “Improvisation sur Mallarmé I,” from Boulez’s “Pli selon pli.” Bernstein prefaced the short vocal work with four-and-a-half minutes of a rambling apologetics, after which Nixon, scaling the icy peaks of Boulez’s frigid world, sounded fearless by comparison.

Bernstein was so appreciative of her gifts that he ceded a tiny percentage of his royalties on the recording of the film of “West Side Story” so that she was paid more than the usual flat fee for recording sessions. The status of an invisible musical partner, adept in the worlds of popular and classical music, must have struck a chord of recognition in Bernstein. His own complex personal life of shifting sexuality required gifts of invisibility at times too, and Nixon’s own empathy with this status would later be expressed in a brief role in the gay-themed comedy “I Think I Do” (1997 Nixon’s own personal outing of her career as a ghost singer, previously sworn to secrecy, included a bold publicity tour before the release of the film of “My Fair Lady,” even appearing as on the panel show “To Tell the Truth.”

Her assertiveness outside the performing arena was mirrored by no-nonsense mastery and confidence in music, helpful with the barely reined-in hysteria of Arnold Schoenberg’s ever-jarring, expressionistic “Pierrot Lunaire.” Her fluency and ease could almost be a drawback, as in a 1959 recording of “Bachianas Brasileiras no.5” by Villa-Lobos led by Felix Slatkin, violinist of the Hollywood String Quartet, whose wife Eleanor Aller anchored the cello ensemble. Whereas earlier, less smooth singers drew out the folk-like elements in Villa-Lobos’ work, Nixon sails through, seemingly sight-reading it with a certain triumph. By contrast, her CD recitals of songs by George Gershwin and Jerome Kern are undiluted joys, an expression of her mature personality. This exuberance suited her well during performance tours with the Danish Jewish pianist-comedian Victor Borge (born Børge Rosenbaum). No self-serious diva, she relished Borge’s antics, as recounted to one interviewer: “One night [Borge] stuck a banana in my mouth when I was about to sing. I never knew from one show to the next what we were going to do.”

In songs by the eccentric genius Charles Ives, Nixon’s down-to-earth sanity, command, and aplomb are invaluable. Her dauntless, resolute approach to music-making is perhaps best heard in a recording of Alan Hovhaness’s “Avak the Healer a cantata inspired by the case of Avak Hagopian, an faith healer born in Azerbaijan in 1927, and purported Messiah who made headlines in the 1940s. A eupeptic and curative personality herself, who significantly redeemed a family name often invoked by the media in negative presidential contexts, Nixon will be much missed.