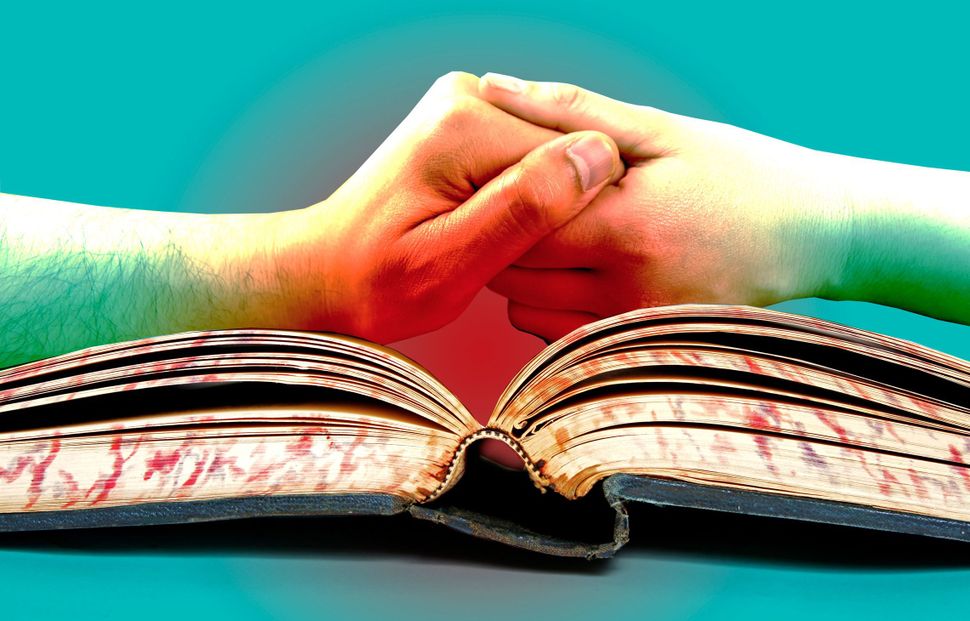 After 36 years of fiercely devoted marriage, my husband and I are broke, anxious and disappointed. We hardly speak to each other, and when we do it is mostly to accuse and complain. Is it desperation, a search for solace or something more elusive that brings us to the most unlikely of places? One autumn afternoon, responding to an invitation by a rabbi friend, we find found ourselves joining a class called “Tales From the Talmud.”

Neither ET, as I call my husband, nor I have any reason to believe that rabbinic literature will be restorative. Our personal histories with Judaism are very different: ET, a hidden child during the war, lived most of his adult life as a secular, Parisian Jew. His attitude toward Talmud study is at best neutral, tinged with curiosity. I am a generation younger, raised in the postwar era by a father whose militant Orthodoxy was a constant impediment to everything I longed for in life.

Despite my misgivings, we find ourselves on the 46th floor of a midtown law firm, seated on opposite sides of a spacious conference table, ready for class to begin.

The first discussion pushes a hot button. How can we recognize true love, the Sages asked. One replies that the real thing is not conditional on anything external such as beauty, wealth or status, for if it were, love would too easily risk its own extinction. Another counters that true love is of course dependent on conditions. The real question is — what conditions. If they arise from solid values — piety, wisdom, trust — they will sustain the bond.

Could my love have been conditional on the good times? It’s uncomfortable seeing myself in that harsh light. What were the underpinnings of our union? Over three decades, we had no shortage of passion, travel, dancing, culture, humor, social life. But lasting values like open communication, deep caring, trust and honesty, devoted parenting and providing one another with rock-solid, safe refuge also figured high. Lately we’ve seen serious erosion on all counts. I try to catch my husband’s eye, but he is looking away.

In the following weeks I recall how the rabbis see the world as multileveled. The physical world is real and present, while it also partakes of higher realms in which ultimate meaning lies. In the Talmud, the faithful often encounter life-threatening drought. The imbalance in the natural world is symptomatic of ills on other planes: They must reckon with their deeds; their relationship with God must be set right.

We read of a rabbi who brings his disciples to a rooftop to pray for rain. His humble wife undertakes her own quiet supplications in another corner. The rain comes to her area of the roof, not the men’s. When resources run dry, as inevitably they do, women are the go-to rainmakers — even, or especially, in a patriarchal society.

When we leave class, ET says, without apology or aggression: “You know, I was able to provide for you for a long time. Now it’s your turn.” Ill at ease with this reversal of assumed gender roles, and even more discomfited by my own inflexibility, I find an excuse to hurry along. But I am unable to ignore the message.

A week later, still seated apart, we read a story about an older rabbi who declares to his wife that he will henceforth be sexually abstinent. The frustrated woman dresses up as the town prostitute and vamps in the garden, where her husband retreats to study. Overcome with desire, he asks her to fetch him a pomegranate. She agrees, and there is a certain ambiguity overlaid with sexual innuendo as to what happens next. He returns to the hearth to find his spouse in her usual wifely drab. He laments that because he has sinned, he must be punished. His wife insists he has committed no such sin because the object of his “illicit” desire was none other than her.

Again, the wife is the more resourceful of the two. I ask ET if, in his view, the husband might have known all along that the object of his desire was really his wife. ET insists that the man’s libido was awakened by only the fancied transgression. We are having our first edgy and totally honest exchange in a long time.

In another class, we read of a father who reminds me of my own. ET and I are now seated side by side. An angry Rabbi Abin tells his daughter, “You are a source of trouble to mankind; return to dust so that men may not sin because of you.” ET knows how I suffered from my own Orthodox father’s refusal to nurture my life force. ET gently presses my thigh with his own under the table.

The class draws to a close with a final story. A certain Rechumi spends all his time off studying in the far-off academy, coming home to his wife only for Yom Kippur. One year, she waits and waits, sure that her husband will come, but he does not. Still at school, Rechumi wanders up to the roof in deep contemplation. In the moment his wife realizes he is not coming, she sheds a single tear. In that same moment, the roof collapses under Rechumi and he is killed.

ET asks, “Do you know why this one tear is so powerful?” I reply, “Because it is her “Aha” moment, the instant everything becomes clear.”

He says, his voice cracking: “This is not simply a unique tear. This is her last tear. After this tear, she will never shed another over this man.”

We sit curled up in each other’s arms, breathing in harmony if not in unison, recalling the old feeling of absolute belonging.

The classes are over, but the rabbinic imagination has put us in touch with our impulses and excesses, our patterns and possibilities. Like the Sages, we do not always agree, but we are again fully engaged. It seems the embrace of shared vulnerability is the unconditional condition of aging love, one that is not likely to expire.

Susan Reimer-Torn is the author of “Maybe Not Such a Good Girl: Reflections on Rupture and Return.”