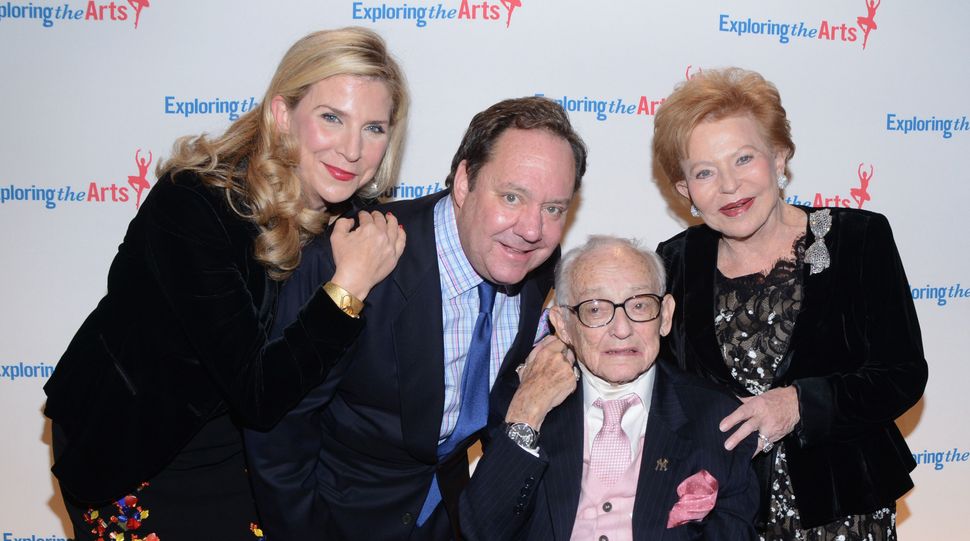 James M. Nederlander, the American Jewish theater impresario who died on July 25 at age 94, was more than just a producer and theater owner in New York and Chicago. Growing up in Detroit, Nederlander, known in the theatrical world as Jimmy, honed his showbiz smarts by studying such star performers as Ed Wynn (born Isaiah Edwin Leopold; 1886–1966) and Al Jolson (born Asa Yoelson; 1886-1950). The Nederlanders were a family of tough theater businessmen according to the producer Emanuel Azenberg, who visited them in Detroit in 1963. He saw Nederlander pleading with his father not to fire an electrician who had made the capital error of submitting accurate information about the amount of electricity used in a theater, instead of altering it to lower expenses. Finally, although the electrician was fired, he was immediately rehired and remained with the organization.

Raised with such high drama in the office as well as onstage, Nederlander eventually headed for New York where he seemed to absorb by osmosis the snappy dialogue of heart-on-sleeve vintage Broadway comedies. He developed a wisecracking persona which inspired affection, especially in his later years. “The Intelligent Conversationalist” attributes to Nederlander the aphorism: “There’s no limit to the number of people who won’t buy tickets for a show they don’t want to see.” Even actors who were the targets of his jibes appreciated them, like the Australian entertainer Peter Allen, who confided to “New York Magazine” in 1988 that he had admitted to Nederlander his anxiety over rehearsing his first acting role on Broadway: “But … Nederlander gave me some good advice last week. He said, ‘Face it, Peter. If they wanted to see great acting, they’d go to a Robert De Niro movie.’” At the same time, Nederlander built up Allen’s ego by likening him to his own boyhood idol, Jolson. Sometimes his maxims could seem over-simplistic, as when Nederlander passed along advice to a gossip columnist, based on having lived through the Great Depression: “I learned one thing. Don’t be poor.”

In his rapport with creative talents, Nederlander had an ambivalence that wound up seeming benevolent, even when he warned other producers: “Stay away from the backstage area or they’ll want you to paint their dressing rooms.” This dismissive yet somehow appreciative attitude toward performers also echoed in his advice about how to treat them: “Send ‘em flowers and tell ‘em to go away.” At the 1981 Tony Awards, when Elizabeth Taylor had difficulty reading a list of producers aloud, she renamed Nederlander as “James Needleheimer.” The result was an affectionate guffaw from the audience, seemingly as much for the newly named Mr. Needleheimer as Taylor, who shared in the laughter before yelping, “Jimmy, I’m sorry!” Firmly believing that no one really knew in advance what shows would succeed, Nederlander followed his own instincts in what he determinedly kept a family business. Eschewing corporate boards and marketing analysts, he would back a show such as Martin Charnin’s “Annie” sight unseen because he admired its director, Mike Nichols. And bid aggressively against the Shubert Organization around 1980 for the right to present another hit, “The Dresser,” by the South African Jewish playwright Ronald Harwood (born Ronald Horwitz in 1934). Nederlander won by offering Harwood not just a large amount of cash but also a generous slice of net profits.

Not all his productions were smashes, and for decades, conflicts with business rivals would sometimes wind up in law courts. On one such occasion, Joseph Tandet the producer, entertainment lawyer, and self-proclaimed former “little yeshiva boy from Brooklyn,” found himself opposing Nederlander in court. Tandet recalled: “I needed a pen during a break in the trial and I asked Jimmy [Nederlander] if he had one. He gave it to me readily without realizing for the moment who I was and when he did he said ‘Give that pen back’ grabbing it out of my hand.”

Fortunately, in his later years, rivalries seemed to mellow with more of a sense of collaboration and mutual goals. Even so, some exacting talents could be exasperated by the Nederlander style of business. The playwright Neil Simon explained in a memoir that on opening night of the musical “Sweet Charity,” for which he wrote the book, the first five rows of orchestra seating were given to Nederlander associates from Detroit, all familiar with the show’s jokes, who did not laugh. Simon complained that the “funny lines were greeted with murmuring, as if people in church were mumbling their prayers in hushed, reverent tones.” At that moment, Simon confessed to a violent impulse against Nederlander, who was not to be found.

When Nederlander’s first instinct was not the right one, he was quick to make amends. According to James Gavin’s biography of the singer and actress Lena Horne, when Horne expressed interest in performing onstage in 1980, Nederlander suggested a double bill with the 1960s Italian-American tenor heartthrob Sergio Franchi. Horne summarily dismissed that notion with the comment: “I can work by myself, you know?” She did so, and “The Lady and Her Music” turned out to be a highlight of Horne’s long career. While still in the preparatory stages, Horne visited the Nederlander Theatre on West 41st street between Seventh and Eighth Avenues, as described by Gavin:

“[The theater] stood on one of the seamiest stretches of Times Square, which was years away from its eventual cleanup and gentrification. At night, prostitutes hovered in doorways; garbage lay in gutters. Horne was incensed, ‘and she let us know’…”

Still, the theater’s interior was cozy and the project fell into place with Nederlander delegating artistic authority with his usual instinctive taste and confidence, only specifying that Horne’s show should have “no messages!”

The long and indeed ongoing list of productions presented by Nederlander, in association with his son James L. Nederlander, likewise bore no innate message, apart from one of entertainment. The occasional dramatic play would be alternated with musical comedies and special concert performances: “Hamilton,” “Wicked,” “La Cage aux Folles,” “Noises Off” and “The Life and Adventures of Nicholas Nickleby” were just a few of over one hundred shows Nederlander produced or coproduced since the 1960s. Yiddishkeit or 20th century Jewish history was not a priority, as Nederlander told “New York Magazine” in 1999: “The name of the game is booking…My niece Amy did Anne Frank, which I didn’t like the idea of. I think we’ve had enough of that Holocaust business. I mean, how many … You can beat a horse to death, you know?” The plays he did present seem to have nothing in common, apart from a shared quest for excellence, regularly achieved.
Benjamin Ivry is a frequent contributor to the Forward.