In Globe’s ‘Merchant of Venice,’ Shylock is The Victim 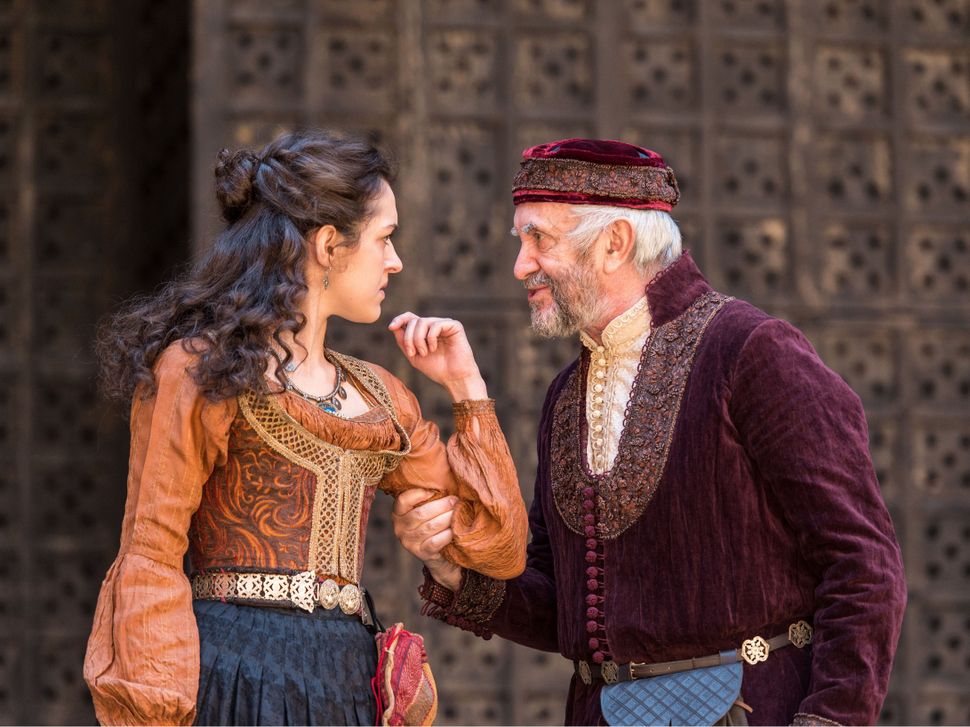 Last Saturday, roughly halfway through the first act of the Globe Theatre’s “The Merchant of Venice” at this year’s Lincoln Center Festival, your correspondent could be found, much to her astonishment, on the stage.

She was there at the behest of Launcelot, played by Stefan Adegbola, Shylock’s comically rebellious servant. Indulging an internal debate over whether or not to stay in Shylock’s service –“Certainly my conscience will serve me to run from/this Jew my master” – Launcelot leapt into the audience to find two viewers to help him settle the matter. (Several wiser members of the audience demurred; this one, journalistic integrity be damned, abandoned her notebook and accepted the challenge.)

A hard conscience, maybe; certainly, although unbeknownst to him, a Jewish one. It was an intimate entry point to a production that took pains to transform its source text, frequently thought of as anti-Semitic, into a play that was instead about anti-Semitism. For those unfamiliar, “Merchant of Venice” centers on the tense relationship between the Christian merchant Antonio and the Jewish moneylender Shylock. The duo have a history of conflict; nevertheless, in order to help his friend Bassanio woo his wealthy beloved, Portia, Antonio seeks a loan from Shylock. The latter sets the loan’s collateral as a pound of Antonio’s flesh. Antonio’s ships go missing, Shylock insists on collecting the collateral, and Antonio is only saved by Portia, who adopts the guise of a lawyer to argue that Shylock may only collect his bounty if he does not spill a single drop of Antonio’s blood in doing so. Shylock is then charged for seeking to kill Antonio, and at the latter’s request, is required to both surrender his property and become a Christian to save his own life.

Director Jonathan Munby’s efforts to employ the play’s anti-Semitic tropes to allow for a searching investigation of prejudice, rather than an easy fulfillment of it, were clear from the play’s first moments. It began with a silent masque at Venice’s Carnival; elaborately-dressed revelers drank, flirted, and gave off an air of vaguely aggressive joviality. That air quickly turned menacing when two Jews, identifiable by their bright red skullcaps and the yellow circles embroidered on their clothes – the actual uniforms Venetian Jews of Shakespeare’s time were compelled to wear outside the ghetto – entered. They were promptly – almost instinctively – set upon and beaten.

That scene transitioned to one in which Antonio, Bassanio, and Gratiano, the latter two of whom were painted as the play’s protagonists, discussed the incomprehensible sadness that had descended on Antonio. Casually, they held their masks from the previous scene in their hands, insinuating that they could have been the Jews’ attackers. Later, when Antonio and Bassanio went to seek Shylock, only to have him reproach Antonio for harassing him for being a Jew, Antonio wrenched Shylock’s prayer book from his hands, threw it to the ground, then dragged its owner around the stage by the beard.

The message was clear: the men who would eventually be painted as victims of Shylock’s villainy were not necessarily those with whom the audience’s sympathies ought to lie. It set the moral tone for a thoughtful, carefully envisioned production that laid forth a radical, masterfully executed reinterpretation of one of Shakespeare’s most problematic plays.

With a cast led by Jonathan Pryce as Shylock, his daughter Phoebe as Shylock’s daughter Jessica, and Dominic Mafham and Dan Fredenburgh as, respectively, Antonio and Bassanio, every gesture of this “Merchant” was designed to evoke an environment of toxic anti-Semitism, and broader intolerance. (In a moment that felt unfortunately forced, after winning his life, Antonio attempted to kiss Bassanio; the latter recoiled in revulsion, leaving his friend looking bereft and adrift.) In such a setting, and through a skilled performance by the elder Pryce, Shylock became a figure of extraordinary pathos. No longer a menacing, alien presence, Pryce’s Shylock was a man whose mind, spirit, and body had been driven to the brink by the blows inflicted by a lifetime of prejudice.

That interpretation, in turn, made Shylock’s determination to claim a pound of Antonio’s flesh, and in doing so, kill him, surprisingly human. Perhaps his fixation is not, as the other characters suggest, a product of cruelty or perversion, but the manifestation of a deep-rooted wish for inclusion. He wants to make Antonio’s flesh – the flesh of a protected, respected, privileged Christian – his own; it’s easy to imagine that wish, expressed so literally, to in fact be one to be accepted as Antonio has been accepted. All the more cruel, then, that Shylock ended the play forced to convert to a Christian, respect and protection not included.

The atmosphere of intense prejudice also made Shylock’s daughter, Jessica, a much more sympathetic figure. After running away from her father early in the play to marry the Christian Lorenzo, converting in the process, the younger Pryce brought a halting discomfort to her character’s new identity, making it clear the transition was not as easy as her husband expected it to be. She and Lorenzo took shelter in Portia’s household; through the insinuations of Rachel Pickup in that part, Jessica was made to understand she was not quite welcome. Cracks in her relationship with Lorenzo began to show.

Shylock and Jessica’s respective responses to prejudice culminated in the production’s most moving moment: Shylock’s conversion, a scene not included in Shakespeare’s script. As he trembled and sputtered under the baptismal waters, his daughter, holding a letter informing her of her father’s fate, collapsed and wailed out a Hebrew prayer. As the scene progressed, her cries became indistinguishable from the Latin chants of the priests escorting Shylock. It was an expression of a deep, almost primal empathy: having chosen to disavow her faith, her grief for her father when he was forced to abandon his flooded forth with a strength greater than that of her love for her husband, her commitment to her new life, and the image of herself she’d created over years of chafing at her father’s wishes.

I left the theater shaken, aching with the need to speak to my own father. I called as I stepped out into the sunlight. He had just come from synagogue.

In Globe’s ‘Merchant of Venice,’ Shylock is The Victim