In the Case of Shylock V. Antonio, Judge Ginsburg Presides 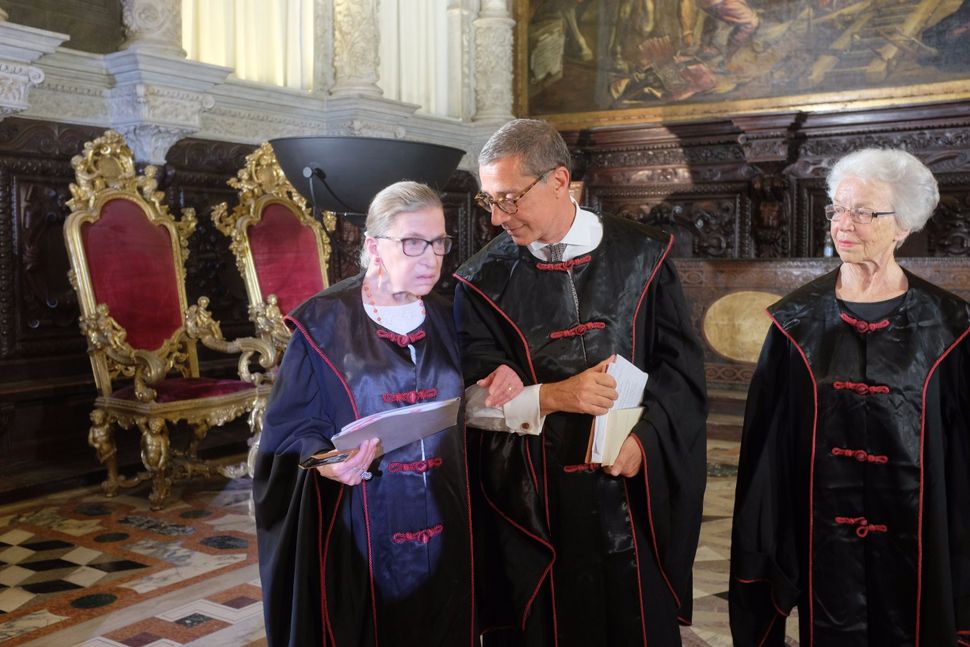 Ruth Bader Ginsburg presides in ‘A Merchant of Venice.

Vengeful. Bloodthirsty. Merciless. Jewish. William Shakespeare’s “The Merchant of Venice” is practically synonymous with Shylock, the moneylending Jew who demands a pound of flesh from his Christian nemesis Antonio (the actual merchant of the title). But Shakespeare’s romantic-comedy-meets-courtroom-drama it is also full of thorny legal issues. Was there ever a demand for payment prior to trial? How did a civil case between Shylock and Antonio get turned into a criminal case with Shylock begging for his life? Could Shylock have ever guessed that the Alien Statute, used against foreign enemies of Venice’s citizens, would be invoked and used against him?

Such burning questions were addressed last week in Venice during a mock trial presided over by Supreme Court Justice Ruth Bader Ginsburg. The star-studded event, “Mock Appeal In the Manner of Shylock v. Antonio,” was the highlight of the 500th anniversary of the Venice Ghetto. Graced by a high-powered audience of scholars, politicians and even a few celebrities, the trial was held in conjunction with a special production of The Merchant of Venice, performed for the first-time ever in situ in the Venice Ghetto.

In the sala superiore of the Scuola Grande di San Rocco, Ginsburg heard arguments from lawyers representing the play’s main characters, seeking to redress potential miscarriages of justice from the “first trial” that occurred over four hundred years earlier. Sitting in judgment below Tintoretto’s dazzling Old Testament scenes, Ginsburg was joined by four other “judges,” including the US Ambassador to Italy, John R. Phillips and Richard Schneider, Associate Dean at Wake Forest University in North Carolina.

Inside the sweltering hall, court protocol was, for the most part, observed. The audience rose for the judges and director of the Scuola di San Rocco intoned, “We believe in the justice of this honorable court.” Ginsburg, lauded as a “champion of civil and human rights” by Michele Bugliesi, rector of Ca’ Foscari University, made sure that rules were observed.

“Ordinarily in a court, council would not be facing the audience,” she rebuked the Florentine lawyer assigned to Shylock, Manfredi Burgio, as he began. Somewhat ruffled, Burgio bungled his appeal with confused pronouncements and non-sequiturs. He was clearly no match for F. Murray Abraham, who had taken the stage minutes earlier to perform the famous “Hath not a Jew eyes?” soliloquy, a little taste of Shylock by Salieri that only piqued one’s appetite.

The Oscar-winning actor, hailed by Shakespeare scholar and Columbia University Professor James Shapiro, as “the greatest Shylock I’ve ever scene,” held his applause for Bugliesi. It was disappointing that Antonio and Portia has been assigned far better lawyers. In the course of the trial, however, one felt certain that the judges’ sympathies were with Shylock, who loses everything at the play’s end and, on top of everything, is forcibly converted to Christianity after Portia, disguised as a man, infiltrates the court and turns the tables on the gloating moneylender.

One of the most memorable exchanges had to do with whether Shylock could have anticipated the catastrophe that befalls him. “If so, Shylock must’ve been out of his mind to take that risk,” expounded Ginsburg. “He certainly was trying something very difficult,’ Antonio’s lawyer, Mario Siragusa, responded with sangfroid. In another wonderful moment, Ambassador Phillips bluntly asked Jonathan Geballe, representing Portia: “Is it appropriate for a third party bystander to come in and misrepresent her legal training and her sex?” Pointing out that Portia would be the one putting up the money to cover Antonio’s bond, the justice queried, “Isn’t there a huge conflict of interest here?” The regular peals of laughter showed that the audience knew its Shakespeare well.

As the justices deliberated, Shapiro and the Harvard Professor Stephen Greenblatt held an exchange about the play. “It is a disturbing play. It is unsettling,” Greenblatt said, recalling his shock at encountering Merchant of Venice for the first time as a college freshman. At first, it confirmed what his parents had always told him. “They hate us Jews and they always will.” Now he point to split feelings of identification with Shylock that Shakespeare built into the play. According to Greenblatt, the Bard is done no favors by sugarcoating things or giving students “trigger warnings.” He urged a direct confrontation with the play and what it has to say about prejudice and xenophobia, rather than hiding behind fashionable political correctness. “It’s better to engage the way Shakespeare does and not built walls around reality,” he told the audience.

When the judges returned, the court has reached a unanimous verdict, restoring to Shylock his confiscated property, overturning the forced conversion and calling for the return of 3000 ducats lent to Antonio. “We annul the forfeiture. It was a criminal sanction, given without prior notice and no opportunity to defend against it. The conversion was sought by Antonio, the defendant in the case. I’ve never heard of a defendant in a case turning into a judge like Antonio did,” Ginsburg summarized.

“I think there is no other instance in all of Shakespeare of a forced conversion. So the conversion is annulled,” she continued somewhat irreverently.

It was a triumph – however delayed – for Shylock that sadly was not shared by the outdoor production, staged in the Campo del Ghetto Nuovo under the stars.

As directed by Karin Coonrod and staged by the New York-based Compagnia de’ Colombari, this Merchant in Venice would have been pretty run of the mill were it not for the baffling choice to distribute the role of Shylock between five different actors. Far from illuminating different facets of the character’s psychology and temperament (presumably the intended effect), the strategy undermined the production by splintering one of the Bard’s greatest characters. The Welsh actress Jenni Lea- Jones gave the best slice of Shylock as a grieving father, performing with a raw intensity that brought to mind Fiona Shaw. In the trial scene, Ned Eisenberg wagged his finger like a tough guy attorney from the Bronx, striking an unmodulated bitter tone.

In general, the women outshone the men, starting with the muscular and verve-filled Portia of Linda Powell. Far better than the petty insertion of Hebrew words (Shylock says “Shalom” and his converted daughter Jessica refers to herself as a “Goyah”) was the Italian language component of the production, which included some translated portions of dialogue as well as instertions of bawdy commedia del’arte sketches and songs in Venetian dialect. And while some of the Italian cast members had difficulty with the Bard’s English – or in the case of Stefano Scherini’s Antonio, sounded utterly drunk – Francesca Sarah Toich was wildly energetic with a lush, deep voice, as Shylock’s disloyal servant Launcelot (here called Lancillotto). She was also the only performer who was equally captivating in both languages. Another bright spot was the infectious and varied music by Klezmatics-founder Frank London. Ultimately, however, the lack of a persuasive Shylock at the production’s core caused the production to run aground. As a consequence, one of Shakespeare’s shortest plays felt especially long. More crucially, Coonrod’s split-Shylock approach precluded any genuine understanding of this endlessly complex and problematic figure.

“He’s a character that no one can come to terms with,” Greenblatt surmised in the podium discussion, suggesting that this may be the reason Shylock disappears in the final act, after dominating the previous four. “And we’ve been grappling with it for 400 years.”

In the Case of Shylock V. Antonio, Judge Ginsburg Presides